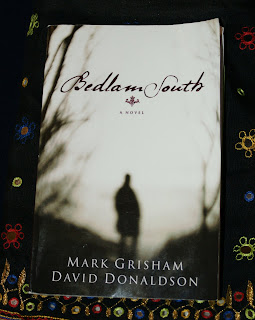 I couldn't find a decent image of the Bedlam South cover, online, so I plunked my copy on top of my Poppet bag and shot a few photos. Yes, my poppets live in a lovely, embroidered bag . . . which, coincidentally, was purchased in the same town that houses Bedlam South's publisher, State Street Press in Ann Arbor, Michigan.

I've recently discovered a new obsession with all things (American) Civil War and the description of Bedlam South grabbed me right off the bat. There are several interwoven plotlines and you can read the cover blurb, here. I overcame my shy nature and boldly asked the authors if they needed anyone to review Bedlam South, after reading about it at another blog. David Donaldson kindly replied and shipped an ARC. And, oh, I'm so glad I asked!

In the story, "Bedlam South" is the nickname for Wingate Asylum, a mental institution in Richmond, Virginia where soldiers suffering from various mental afflictions are housed and -- as in the Bedlam of English fame -- many are tortured and brutally killed by a sadistic and badly deformed veteran by the name of Captain Samuel Percy and his cohorts, men who pillage and kill during their leisure time, as well as their working hours. Joseph Bryarly is called home from Bethlem Royal Hospital in England, assigned to work at Bedlam South. Upon his arrival, he immediately becomes enemies with (and subordinate to) Percy. Can he make a difference or is madness or death the only way out?

Zeke Gibson joins his brother Billy on the front lines with Company C, 13th Mississippi. Initially excited to join the Confederate effort, Zeke soon discovers the hardships of war as his company, a part of Longstreet's Division of The Army of Northern Virginia, faces long marches in inclement weather, tiny rations and shocking casualties. Separated at Gettysburg, neither brother knows if the other is alive and both must struggle through their own private battles and momentary madness. Eventually, their lives will intertwine with that of Dr. Bryarly and an Irish immigrant family.

I'm skipping the normal review format because I don't think I can really give this book its due using that format. What you really need to know is that the only reason I set this book aside for even a minute was to focus on finishing another book I'd been reading for quite a while. It was painful putting Bedlam South down for a few days; and, once I picked it back up I was simply immersed.

Ordinarily, I'm not a fan of vernacular but there are several modes of speech in this book and I thought the dialect served well to distinguish the characters. Zeke, Billy, neighbor Nate and other Mississippians speak with thick, farm-boy Mississippi accents. Joseph is originally from Alabama, but life in England has altered his mode of speech; he's proper and formal. The Irish immigrants speak as you'd expect, although there were times I thought they veered toward the trite.

What I truly loved about this book was the sense of place -- the ease with which one can empathize with the soldiers as they shiver in the cold and yearn for larger rations and shoes that aren't falling apart, the placement of the fictional characters within the framework of actual events and references to true characters of the Civil War. I've only recently become familiar with the major players in the Civil War and I admit to getting a buzz out of reading about them from the inside, so to speak. Other characters are fictional, but well-known generals appear in their proper places within a realistic timeline. When important leaders are killed or injured, the deaths and injuries are mentioned.

Not long ago, I read a Civil War novel in which the war left the characters largely untouched and I found that frustrating. Bedlam South is quite the opposite in that you get a true understanding of how loss and tragedy become a way of life during a time of war.

It was also fascinating to read about the way deserters and men suffering from Post-Traumatic Stress (which we all know about now, but which was not a recognized condition at that time) were treated, at the time -- lined up and shot or locked away, tried and hanged. I recall reading a dispatch about how deserters were to be handled in The Words of War, but reading about those men when they were described as individuals put a new perspective on the process. As the story progresses, the reader becomes aware that each of us handles challenges in different ways but it's not completely abnormal for any person to experience the odd momentary loss of sanity when surrounded by death and horror, starvation and other extremes.

There are little things I could criticize about the writing in this book; it's not perfect. I think the book was a little shy on character development, but the way the authors place their characters in the midst of hardship really jibed with the nonfiction I've recently read, so I appreciated their attention to those depths of deprivation due to war-time conditions. Otherwise . . . anyone who has studied writing will catch a few "new author" mistakes. I found the story so utterly page-turning that I chose to ignore those minor flaws. When I first picked up the book, it grabbed me immediately. I cared about Zeke and Billy, Joseph, the Dougall family and Mary Beth, a high-class hooker. I highly recommend Bedlam South, particularly to fans of historical fiction and Civil War buffs.

One thing I really appreciate about the book . . . sex is never described in graphic detail; in spite of the fact that many of the soldiers in the book turn to prostitutes (and that one key character has turned to prostitution to survive) and some of the characters fall in love, the actual couplings are bypassed. Thank you, thank you for that, Mr. Donaldson and Mr. Grisham.

A portion of the procedes from this book will benefit Impact Missions, a North Mississippi charity founded by David Donaldson. You can read about David and Impact Missions, here. Be sure to page all the way down, so you can see his cute little grandbaby and the firing cannons.

The authors have written two follow-up books and are working on a fourth book. I am bouncing on my toes. I cannot wait to read them.

Must dash to church, but I hope to get around to a belated Buy a Friend a Book giveaway post, later today or tomorrow, as well as a wrap-up of my September reads.
Posted by Bookfool at 8:42 PM