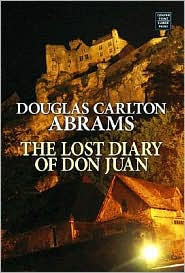 In front of us the Arenal spread out like a dirt beach from the city walls to the river. It was a scene of chaos, people jostling with mules and carriages going nowhere.

"Move out of the way!" a driver shouted vainly.

A noble lady daintily held up her billowing skirts as she crossed the dry mud, speaking anxiously to her children. "Careful now. Come quickly." Barefoot commoners swarmed all around them.

Two caballeros even managed to take offense at being shoved and were engaged in a swordfight. "How dare you refuse to yield to your better!"

"I'll show you who is better--with my sword!"

Not even the arrival of the ships restrained these duelers, who were clearly trying hard to take their minds off their fortunes with a show of outraged honor. I pulled Cristobal out of the way just in time to avoid his being gored.

What led you to pick up this book? I was offered a copy of The Lost Diary of Don Juan for a book tour and I really liked the excerpt I read. It was not overly graphic or rude and I love historical fiction.

Confession: The website also grabbed me (mostly the sight of a sword -- if there's one thing I love, it's a bit of swashbuckling adventure). Turn the volume on, if you visit that website. The music is wonderful.

Describe the plot without giving anything away. An infamous lothario falls in love with the one woman with whom he cannot possibly have a physical encounter. Set in Seville during the Spanish Inquisition, Don Juan is known to the dangerous leader of the Inquisition but protected from arrest and torture because of his mentor, the Marquis. But, will the Marquis lead to his downfall?

What did you think of the characters? Honestly, I just found Don Juan disgusting. The book is packed with purple prose, during which he rhapsodizes about a woman's passion over and over and over, again. He's convinced he is doing women a favor by filling in for absentee husbands or supplying hopelessly single women's physical needs. He claims he can never love or marry, but in the long run that turns out to be an unfounded claim, of course, as he falls hopelessly in love. Dona Ana, the woman he adores, is justifiably repulsed by him. She seemed a decent gal; I liked her till close to the end.

Describe your favorite scene: There are several, actually. In spite of the fact that I disliked the protagonist, I thought the author did an excellent job of setting the scene. There were a few fascinating, almost cinematic scenes -- sometimes the author even injected a bit of slapstick humor. One of my favorites is the scene during which Don Juan is headed toward the dock to see if the ship that may be carrying his fortune will arrive (quoted above). You can easily zone in on the writing flaws in that particular excerpt (which I liked, but . . . isn't "dry mud" dirt?) . There are some scenes with swordplay that I enjoyed. And, a lot of leaping over roofs, hiding from various enemies and protectors of the women he seeks to entertain.

Recommended? That's a hard one. I think a lot of people will enjoy the book. It's often overdone, especially on the descriptions of what Don Juan thinks of women and his ability to please them, but there are some exciting action scenes. It's not a family-friendly book, as you'd expect, although it certainly isn't as graphic as it could have been. There are plenty of fun scenes that don't involve se*ual encounters. I don't recommend it to those who want to keep the fiction in their households clean. But, I liked it for the action and would call it an average read. I'd say avoid it if you don't like an arrogant protagonist or overwrought descriptions. Don Juan really did get on my nerves. However, I loved the sense of time and place.

In general: If I hear the word "passion" at all, this week, I will probably slug someone.

It bears mentioning that the action scenes are a little James Bondish in that he is too good at escaping; the sheer quantity of times he manage to squeak by without getting caught stretch believability. But, the time period was fraught with danger -- the Inquisition, a surprising number of widowed or abandoned women, thieves, sanitary hazards, pirates.

On the plus side, I thought it was obvious the author did his research and his notes about the book, why he wrote it and how he studied the time period and the character are fascinating.

Cover thoughts: The cover shown is not the same as that of the book I read. There are three that I know of. The hardback cover shows a man's torso with a cape slung over his shoulder. It's appealing. The copy above . . . I guess that's Seville and I like the night scene. There are plenty of night scenes, since Don Juan sneaks around at night, but it doesn't seem to fit as well, in my humble opinion. And, the one I've got appears to be a painting of a woman in ecstasy, with her boob hanging out of her tunic. You can imagine why I didn't want to put that on my family-friendly blog, but I do think it is the most logical cover choice.