Monday Malarkey, including a reading update

We went to Biloxi (on the Gulf Coast in Mississippi), this weekend, for a swim meet. Did you miss me? Well, thanks. I missed you, too -- I didn't have the time to blog-hop. That tiny print says, "Flew the coop, this weekend. Which one looks like me?" Just telling you, in case you can't read it. I messed with my own photo at dumpr.net, because I don't have a photo program with that nifty sketch feature.

I'll tell you more about our trip, later, and you'll get to see some pictures because Booklogged has tagged me for a photo meme. Today I just feel like writing a malarkey post. I will say, though, that this was the first time we've been to the Gulf Coast since about 5 years pre-Katrina and the difference is utterly beyond belief. I'd heard plenty about the scope of destruction from friends, but seeing the empty spaces where so much had been built up on the shore . . . and mile after mile after mile of empty foundations. There's just really no way to describe how much is gone and how shocking the difference.

Anyway . . . I'm impressed with how beautiful the Mississippi Gulf Coast looks, how clean it is and what's being done with limited funds. Tree stumps are being carved into incredible sculptures (didn't photograph them -- will go back soon, I hope). Palms have been replanted. The beach is mostly cleaned up and regularly combed. It's beautiful. Really, it's so pleasant to be able to see and walk on the beach, again. It had been buried by commerce and the last time we went to Biloxi, we left in disgust, convinced we'd never go back. Well, shucks, here . . . just look: 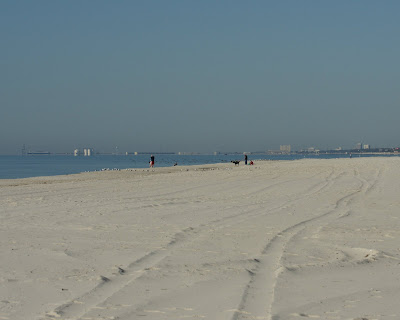 That huge vasty nothingness was crowded with buildings. You could hardly see the water, just a few years ago. Unbelievable. I'm glad it's back, but I feel deeply for the folks who were uprooted and haven't been able to return.

"I read it real slowly because I've never been much of a reader. I'm athletic and I've always kept real busy."

What is it about non-readers that makes them think they're busier than us? I do most of my reading at night, because that's the only time I can squeeze it in (usually -- there've been a couple of glorious weather days that have drawn Bookfool and Cat to the porch, recently). My sister talks about being too busy to read as if it's a badge of honor. I don't get that.

Homeland Insecurity: How Washington Politicians Have Made America Less Safe by Turchie and Puckett

-- 2/3 of the way through. I hoped to finish the book, tonight, but instead I've been running back and forth between computer and son, checking to make sure he's getting that 2-page nutrition report written. I'm as ignorant about politics as I am about history, so I've had to take this one slowly. But, man . . . fascinating stuff and a totally, completely different story about the FBI and corruption than you'll ever hear from politicians or the news. I think every American should read this book. We all need to have a big talk about the subject matter. It's important.

To Catch the Lightning by Alan Cheuse

- Historical fiction about Edward Curtis, the photographer who is famous for his photos of Native Americans. I'm about 1/2-way through with this book and I've formulated some strong opinions, which I'll share when I review it. It's a breezy read, for the most part, but a chunkster. I hope to finish it, soon. "Soon" being a relative term.

- A YA story about a teenager who feels compelled to solve the mystery of the ivy growing rampantly on her new home and the unexplained disappearance of a young girl's body from the nearby cemetery. Finished in Biloxi -- will review it, soon! Most important: It was not nightmare inducing (I'm prone to nightmares).

The Dharma King by B. G. Stroh

- Set aside because I had too many books going, a while back, but not because I wasn't enjoying the book. I'm finding it gripping. This is a short thriller set in Tibet (at least, so far). I'm on Chapter 10 -- not far into it, but enough to know that I'd really like to set aside a few hours to finish.

10:30 PM and I haven't read a single page because I want to have uninterrupted reading time. Maybe tomorrow. What are you reading?