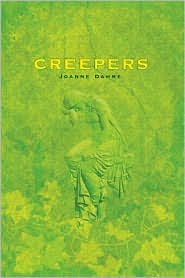 What led you to pick up this book? I received a copy of this book from Running Press, thanks to an offer at Booking Mama's blog, and was in the mood for a quick, slightly scary read.

Describe the plot without giving anything away. Courtney and her family move into an old house in Murmur, Massachusetts, a home that used to belong to the keeper of the cemetery next door. Almost immediately, Courtney is struck by the prolific growth of ivy on her home and the surrounding area. It almost seems as if the ivy is trying to communicate with her. Befriended by neighbor Margaret and her father, the three set out to solve the mystery of the ivy and to locate the missing body of a young girl who used to live in the ancient house. A witch, ghostly carvings and some strange cat behavior add to the atmosphere.

What did you think of the characters? Courtney seemed like a typical teenager who became obsessed with a mystery. I liked her. Margaret Geyer and her father were strange and I didn't feel that their history was fully explained, so I never really got a fix on them. The witch freaked me out.

Describe your favorite scene: There's a scene in which ivy is mysteriously (and very loudly) carved into a design on the basement floor. I liked the creepy factor in that particular scene. It was not enough to induce nightmares, but it definitely made my skin crawl.

Anything else worth talking about? Oh, yes. This book is billed as a young adult novel and there are two teenage characters. But, I think older readers might find it a little dissatisfying, simply because it isn't all that frightening. It's probably better suited to adolescents. As a person who is prone to nightmares, I really appreciated the fact that the book wasn't so terrifying that I couldn't read it at night and that it wasn't nightmare inducing.

Did the ending fit the book? The ending was a little bit odd and that's one of the reasons I think it's better suited to a younger audience. I had a wee bit of trouble accepting Courtney's conclusions. But, I do think my eldest child (my youngest is not a big fan of anything even slightly frightening; eldest grew up on Goosebumps) would have really enjoyed the book when he was going through his scary-reading phase.

Recommended? Yes, for those who are looking for a mildly spooky book.

In general: A quick, fun read with a vaguely unsatisfying ending, probably best for about ages 8-12. I think younger, less judgmental pre-teens will find the ending more satisfying.

Cover thoughts: More than just the cover, the artwork is amazing. Creepers appears to have been created thoughtfully and probably at significant expense. The dust jacket is beautiful, as is the actual hardback cover, beneath. Ivy swirls around the edges of some pages; others contain beautiful black-and-white photos or illustrations, often with green decorative touches. A lot of thought went into this book.
Posted by Bookfool at 9:40 AM