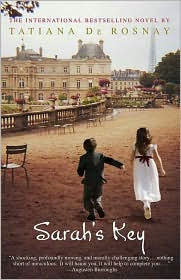 What led you to pick up this book? I love reading anything and everything set during WWII (and sometimes between the two world wars).

Summarize the plot without giving away the ending. Young Sarah locks her brother in a cupboard to save him from the police when her Jewish family is rounded up and taken to the Velodrome d'Hiver, during WWII. Dragged from her home, the key held tight in her pocket, she worries about her brother. When will she be released from the stadium so that she can let her brother out of the cabinet?

In present-day France, journalist Julia Jarmond researches the Vel d'Hiv roundup. She is forever changed by what she learns about the round-up in general and captivated by the story of young Sarah. What became of Sarah? Julia will not rest until she finds out.

What did you think of the characters? A few details, first. Sarah's Key is told via alternating viewpoints, first Sarah and then Julia, until a certain point. Then, the point of view shifts entirely to Julia, as she searches for answers.

Sarah is close to the age of Julia's daughter. Julia struck me as a decent, kind-hearted woman who ended up in a lousy marriage because she let her hormones guide her. It was easy to sympathize with her and I found her soft spot for Sarah believable. Sarah was a little bit of a stretch, at times. As per John Boyne's description in his review of The Boy in the Striped Pyjamas, for Estella's Revenge, I thought there was a bit of overkill -- trying too hard to make readers care for Sarah. And, there were pieces of plot that I thought the author pushed . . . times, I guess, when she was so determined to fit her plot around the Sarah that I thought, "No. She should have done this. Sarah would have tried. She was a determined little girl." Aside from those small idiosyncracies (and I admit to being the kind of person who mentally dissects plot), I liked the characters and I cared about them.

Describe your favorite scene: It's a gut-wrenching book; I can't say there was a particular scene I loved, although there were some surprises. When the author threw in something unpredictable, that was when I truly enjoyed the reading. It's an emotionally compelling book and even those small bits that didn't seem entirely fitting still worked . . . they didn't interrupt the flow. I still had to run for the tissues.

Recommended? Definitely. I'm just being picky when I say there were moments I thought the author pushed her plot. I still thought the book was excellent and it will rank high on my list of favorites for the year 2008.

In general: A gripping, emotional read. I had a terrible time putting it down. The last book two books I had this much trouble setting down were Lottery by Patricia Wood and The Book Thief by Markus Zusak.

Cover thoughts: I love the cover. The book is set primarily in Paris and Sarah adores her younger brother. It's appealing and seems to fit, although there is no time that we get to experience the joy that brother and sister shared before the tragic night of the round-up.
Posted by Bookfool at 6:40 PM