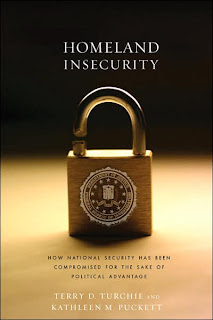 The FBI has been variously portrayed as effective or bumbling, professional or amateurish, blithely arrogant or unshakably determined, powerful or ineffectual. Since it is an institution made up of human beings, all these labels may have been correct at one time or another, and it is not the intent of this book to refute any of them.

Integrity and civility will be restored to the United States Congress and to politics in America when American citizens use their votes to clean the place up, since Republicans and Democrats alike refuse to do it themselves.

. . . since these politicians are also the same people who are charged with insuring the safety of Americans in this latest age of terror, it is more important than ever to carefully monitor their "business as usual".

Most importantly, however, the FBI experience at [Guatanamo Bay] illustrates the critical necessity for the independence of the FBI from involvement in the actions of politicians who react in ways that may seem expedient, but that often undermine both the rule of law and the moral center of American life.

What led you to pick up this book?

Homeland Insecurity was sent to me by the publisher. While the authors delve into the history of the FBI (and I do love history), it's a little bit of a departure for me -- I don't normally read anything at all about politics and the book has to do with how politicians have undermined the authority of the FBI. I'm a safety freak, though, and I wanted to know exactly what they had to say about why America has lost some of its safety rather than gained added safety measures, since 9/11, due to politicians.

Summarize the book without giving anything away.

Homeland Insecurity describes the FBI's wide-ranging tasks involving both domestic law enforcement and internal/external security and how the bureau's independent procedures have been weakened by political maneuvering during a time when the United States is in desperate need of stronger protective measures. The authors describe past misconceptions about the FBI and the reasons that power-hungry politicians have long sought to lessen the bureau's capacity to investigate and enforce the law domestically. The addictiveness of power and money figure heavily into their reasoning as to why politicians have attempted to lessen the bureau's authority since practically Day 1 of its existence.

I liked the fact that I came away from the book with exactly the knowledge and understanding that I'd hoped to gain from the reading. I think it's a book that Americans really need to read and discuss, simply because we're accustomed to being misled by corrupt politicians and the only way to solve a situation that involves the safety of every American citizen is to take matters into our own hands via the power of the our votes.

There are two main sets of "characters" in this nonfiction book: FBI agents and politicians. Both are human, of course, as mentioned in the quote above. But, politicians have recently stomped all over the way the FBI is run and essentially blamed the entire agency and its "culture" for the tragedy of September 11th, as well as a few other fiascos. The two authors worked for the FBI and I found that their explanations for various events and procedures were written, in general, with clarity and intelligence without becoming either inflammatory or sinking to fear-mongering. They encouraged trust with their even-handed writing style. The most damaging politicians are named; the authors are very specific in describing who is at fault or a danger (or has done damage in the past), rather than lumping them all into one pot. It's easy to get annoyed with those who have made it their mission to unravel the fabric of an organization that is, in the long run, really out to protect us all. So, you know . . . boo to the bad guys. I found myself rooting for the FBI.

The big to-do about spying on Americans is explained well -- the reasons for domestic surveillance and investigation, I guess I should say. The "wall" that inhibits communication between various agencies is also described. Interesting stuff.

Absolutely, highly recommended and please let me know your thoughts if you read it.

I like the symbolism, but I thought it was particularly interesting to note that the subtitle has been altered from that of the image shown, which says, "How national security has been compromised for the sake of political advantage" to (the subtitle on my personal copy), "How Washington politicians have made America less safe". Both are accurate, but I think the latter is a little more direct, if a bit simplistic.

The Invention of Hugo Cabret by Brian Selznick. Not sure if I'll review it, as it's a library check-out, but I loved it. It's touching, adventurous, beautifully illustrated . . . wonderful storytelling and visually appealing. I'm trying to talk the kiddo into reading it, before I have to return our borrowed copy to the library.

On the verge of finishing:

To Catch the Lightning by Alan Cheuse. That should be my next review, although I do plan to go out and play with my new camera lens, this weekend, so don't hold your breath or make a vow to "do somersaults until it's been posted" because you will turn blue or get dizzy.

I'll be participating in National Novel Writing Month, although I plan to get off my duff to play and clean, so I probably won't write much, over the weekend. If you're joining in and want to be my buddy, please let me know! Also, expect a wee bit less posting and blog-hopping, this month.

On this day in Bookfool's reading history:

In 1997, I'd just finished Running From the Law by Lisa Scottoline and started to read Our Game by John Le Carre. In 2000, I finished Moon Palace by Paul Auster and in 1999 I was about to have a garage sale. There's little chance we parted with any books, that year. Bookfool was still in "collecting" mode. 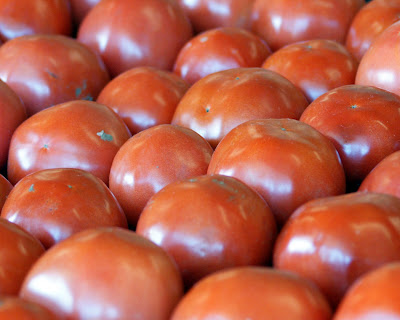 I shot that at our favorite roadside vegetable stand on the trip to Biloxi, last week. Do they look delicious, or what?

Also, I brought home a few books from the library, today. I'll tell you about those in my next post. If I forget, just give me a good whack upside the head. And, have a tomato. Really, you need your fruit.
Happy Halloween!
Posted by Bookfool at 10:05 AM