My cat is reading Bedlam South. And, if you believe that one I have some excellent swamp-land . . . 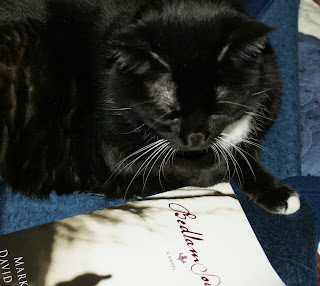 September was a pretty decent reading month for me, although there were some odd gaps during which I finished nothing, nothing, nothing followed by a flurry of completed books. I suppose that's par for the course, but the gaps felt longer than normal. In the end, I completed 12 books with a total of 3,383 pages. There were dramatic highs and lows. I seemed to either love or hate a book, this month; there wasn't a lot of in-between. Maybe because of illness, books were held to a higher standard. If you're feeling lousy, you want to be enormously entertained ("vaguely" just will not suffice) between naps. If I reviewed a book, there will be a link you can click on to read the full review.
Bookfool's September Reads:
1. Talk of the Town by Lisa Wingate - Life and love in small-town Texas. I laughed, I cried; I loved this book.
2. The Words of War by Donagh Bracken - Civil War history; hard reading but it was worth the effort. Thanks to Mr. Bracken, I can now recognize names of critical players and battles.
3. Eleanor Rigby by Douglas Coupland - Not about all the lonely people -- just a few of them, mostly Canadian. Sort of depressing, with an upbeat ending. Also, if you click on the link you can read probably the weirdest review I've ever written.
4. The Last Queen by C. W. Gortner - A fictional tale of Juana the Mad that seems plausible enough and treats her with sympathy. It was rough being royal. Well-written and engaging.
5. Blue Sky July by Nia Wyn - The true story of a mother who refused to give up on her severely damaged child and the miracle that emerged from her love and tireless effort. A book that deserves to be widely read. Beautifully written.
6. Chameleon, Butterfly, Dragonfly: A Divine Guide to Lasting Fulfillment by Cindy Silbert - New Age advice channeled to the author by a Hawaiian goddess. Breeni liked it. I found the book flaky and unhelpful.
7. Walking Through Walls by Philip Smith - Twofers on the "yeesh" factor. Psychic healing, drugs, sex, rock 'n roll. Readable, but sordid. Not my thing.
8. Farworld: Water Keep by J. Scott Savage (YA) - Ah, there we go. Adventure with a sense of humor. A few too many bad guys to easily keep track of, but whatever. Great escapist reading. The kiddo loved it and I appreciated the family-friendliness.
9. The Darcys and the Bingleys by Marsha Altman - My first Austen off-shoot and I had to work at letting go of my Mr. Darcy a bit, but once I did . . . such fun. Witty and surprisingly true to the characters in many ways.
10. Anatomy of a Boyfriend by Daria Snadowsky (YA) - Graphic sex without any real moral dilemma, no paying the consequences for reckless actions. A review would have been akin to throwing the author against a wall and shooting her, so I passed my copy on to a friend who will undoubtedly love it and review it in glowing terms.
11. An Inconvenient Truth adapted for a New Generation by Al Gore (YA) - The kids' version of Al Gore's book on global warming, packed with photos and very well presented (although I do believe a few of those charts would go over kids' heads). Made me want to hug my trees, save the rainforest and the glaciers, snuggle up with a polar bear. I don't see how anyone could disbelieve the evidence, but my husband and I promptly had an argument about global warming and I had to explain those past warming fluctuations and how they compare with the current warming trend. I claim victory in that little tiff.
12. Awakening the Genie Within by Bettye Johnson - The author is old and shares plenty of wisdom, but her religious beliefs are so far removed from mine, that . . . again . . . I thought a review would be a slaughter. I'm not willing to flay authors, so I'll just tell you that the book is similar to Chameleon, Butterfly, Dragonfly in its New-Age, female-power approach but with a dude named Ramtha (whose name is a registered trademark -- beat that) as the god being channeled. Too much of a stretch for me.
What now?

I just finished Sarah's Key by Tatiana de Rosnay, this morning. The Swan House by Elizabeth Musser is rather chunky and I'm a little thick, myself, so it will take me a while. But, I have already had to reach for tissues. Musser knows how to engage a reader emotionally. I'm on the downhill slide in Occasional Therapy for Your Midlife Years by Ellyn Gamberg. It's hard to relate, at times, but it's a good book and it was just me getting hung up, not the author missing the boat entirely. I set The Dharma King aside because I hadn't touched it in a week, but not due to either the writing or the storyline. It was a focus issue. I've decided I'll start it over, again, in a week or two, so the reading can be fresh.

Fred, first. Remember Bob and Fred, our spiders? Fred disappeared for a few days and then returned to the same old web. Bob hung out for a while and then abandoned his (gigantic, awe-inspiring, squirrel-entangling) web. Said the kiddo, "He's probably around. Bob's a mover."

Do you know your nursery rhymes?

Remember Jack and Jill? The old woman who lived in a shoe? Mary, Mary, quite contrary? I thought everyone knew those old Mother Goose rhymes until I moved to Vicksburg. I'd successfully used "Little Jack Horner" to clarify my last name, many times, while we were still living in Oklahoma. But, I hadn't tried that in quite a while . . . till school began in August. The new security guard at my son's school was having a terrible time remembering my name, so I said, "Do you know your nursery rhymes? Remember this, when you see my car . . . 'Little Jack Horner sat in the corner.' " Apparently, she doesn't know her Mother Goose. She's been calling me "Miz Corner," ever since.

Off to my corner to read. I've got to go motivate the teenager to work on abstracts while he's off school. He has this really, really bad grade he needs to fix. This is one of those points during which a mother says to herself, "So, why did I stay home with my kids? I could have been earning money, setting an example for hard work and watching my retirement income disappear!" Actually, that last bit makes staying home sound worthwhile.

Giveaway coming up when I can get to it. Be patient with me, please!
Posted by Bookfool at 2:21 PM