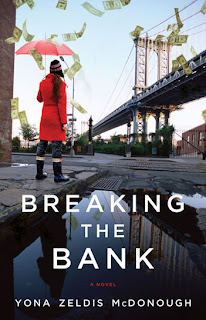 Breaking the Bank by Yona Zeldis McDonough
Copyright 2009
Downtown Press - Fiction/General (with a touch of magic)
349 pages
Mia studied the address, somewhere out in Coney Island, a seedy neighborhood way out on Brooklyn's tip. She wrote down the address on the back of the shopping list and then got up to pay for her food. Suddenly, the day had a new shape and purpose to it. She knew, as surely as she knew anything, that what she was about to do was monumentally stupid. Stupid and dangerous. She could get herself killed, just like poor Weed, who, whatever he might have done, did not deserve a blindfold and a bullet in the brain.
But still. Something about her conversation with Patrick that night was haunting her, something that felt authentic, felt real. She was hungry for that feeling. Craving it. Plus, she knew that every single time she had given some of the miracle money away, she had felt so good, so light, so clean, as if her soul had been distilled and purified, refined to its most pellucid, least-contaminated essence. Use it well, right? Hadn't she been trying? She practically ran back to her apartment, moving so fast she actually broke a sweat. She took five hundreds from her shoe-box stash, then was off again, out in the street and down into the subway.

Mia Saul is having a rough time. Her husband ditched her for another woman, she lost her job and has only been able to find unfulfilling temporary work, her relationship with her older brother is distant and strained and her daughter, Eden, is having more than a little difficulty with the break-up. Struggling to make ends meet with an ex who sends child support when he feels like it, Mia's been forced to move to a smaller apartment in a shady neighborhood and now there are days she can barely afford food for Eden, who sometimes refuses to eat and can only be tempted by exotic foods.

Mia's nearly at her wit's end when a miracle occurs. The automatic teller machine at her bank begins to give her extra money -- but it isn't deducted from her account. Each time she uses the machine, it gives her a little bit more; and, a mysterious message appears with the magical gift: "Use it well." Mia does her best to use the windfall well, sharing the wealth and putting money away in the hope of moving her daughter to a nicer part of town.

But, her life is still nowhere near perfect. Worried family members think she's out of control and stage an intervention; the police become very curious about the origin of her sudden influx of funds and the beautiful antique necklace whose seller seems to have vanished; and, her love life has suddenly become extremely complicated.

Will Mia end up in prison, her child in the custody of her cheating ex? Or, will the miracle last long enough for her to clear her name and make a better life for herself and her daughter?

Whew! Complicated. Breaking the Bank is a fascinating story of hardship, love, sharing, magic, relationships and self-discovery. There is quite a bit going on in this book and I think that's what really kept me reading. I found it a little difficult to relate to Mia and to like her. She's understandably frustrated and sometimes her attitude is a little tiresome. Like a real human, she tries to do her best for her daughter but makes some truly appalling decisions and ends up digging herself deeper into trouble.

But, the really special thing about Mia is that no matter what's going wrong in her life, her love for her daughter is boundless and when she's handed a miracle in the form of a monetary gift doled out by an ATM machine, she truly does her best to share the wealth. It's her willingness to show generosity, the summoning of her inner strength and the determination to do what's right for her daughter that win out in the end. I can't tell you the ending without ruining it, of course, but I absolutely loved the ending of this book. It reads like a movie ending, with a kind of a tear-inducing beauty as the strands are drawn together and the magic is wrapped up with a nice, neat and very big bow. Some people might not like that kind of an ending, but I thought it was absolutely lovely.

The biggest problems I had with the book boiled down to Mia's character. She's basically a good person but she does some truly idiotic things. Because of language, explicit sex scenes and alcohol use (Mia tends to drink heavily when she's having a really bad day, although generally when her daughter is under someone else's care), I'd give the book an R rating -- it's definitely not family-friendly and I truly don't like it when a character sleeps around and drinks then justifies her actions the way Mia does. That's a personal thing, though, and I'm only going to deduct a point for discomfort with the protagonist.

4/5 - Very good. A complex tale, nicely woven with a touch of magic blended into a tale of harsh realism. Includes some violence, explicit sex and very bad language.

This book contains a reading guide with questions for group discussion and an interview with the author. Actually, I think it would probably make a great book for discussion because of the complexity and a variety of moral dilemmas. What, for example, would you do if an ATM machine suddenly began to dole out extra money without deducting it from your account? Would it make a difference if it didn't appear to be magical, but simply a banking error? Does the fact that Mia really needed financial help make her choice more acceptable than if she really didn't need the money? Lots to talk about.

Many thanks to Sarah Reidy of Pocket Books for my review copy!

I'm touring a second book for Pocket, this week and you guys are going to laugh at me because it's so, so not a typical Bookfool book. Actually, that seems to be a recent theme in Bookfoolery: Time to Shake Up the Reading. The book is Day By Day Armageddon - a zombie book, of all things. I've read one other book with zombies, but it was written by a friend who politely pointed it out as one of her tamer novels, knowing I'm not a fan of gore and violence. We'll see whether Bookfool gets totally creeped out by this one. The "impending zombie invasion" and how to survive it, what to stockpile and where to go, etc., is a frequent topic of conversation between the teens on the way to the pool, which at least partially accounts for my unexpected interest in the title.

I posted a lot, this weekend, so I'll shush for now and wish everyone a Happy Monday!