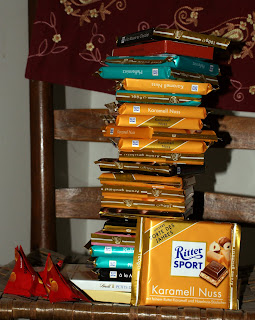 <-----Chocolate! From Germany!!! This is the only reason I tolerate my husband's journeys, let me tell ya.

Please bear in mind that we're not keeping all the chocolate, at left (huzzybuns likes to bring treats to the secretaries to thank them for their hard work on arranging overseas travel), but that's the pile of chocolate my Beloved brought home. Quite something, isn't it? The tons of Karamell Nuss (caramel nut) were brought home at my request because it's the "chocolate of the year" and allegedly will disappear after 2009 ends. I hope not. It's my all-time favorite from this company. However, we don't buy chocolate often because of the slave boys in Africa, so it's not like I'll be running out to get it regularly. I have a painfully heavy conscience.

So, how was your weekend? I had an interesting one, beginning with a kitty emergency on Friday. Miss Spooky's bad eye was looking worse to me, so I took her in to have it looked at. The vet said pressure was building and she appears to have developed secondary glaucoma. He gave her a shot of diuretic with a little tiny bit of painkiller, although he said the only painkiller that really works on glaucoma is marijuana. That's a pretty neat picture -- cat smoking marijuana.
We got some eyedrops to give Miss Spooky every 15-20 minutes, 6 times in a row, then every 6 hours. I followed the rules and by the 5th dose, I noticed my hand was getting wet when I dosed her, even though a drop is not a lot of moisture. But, it wasn't till the 6th dose that I realized my cat was staggering and drooling. She had a virtual river of drool running down her chin. Then some other bad things began to happen, which we'll simply call Intestinal Disturbances and she started to hiss at me. My cat never, ever hisses at me. I called the vet and they said, "Bring her back." Back we went. The vet gave her a shot and told me to back off on the eyedrops to twice a day, gave me his private numbers in case of further trouble and said bring her back Monday. If we can't get the swelling under control, she will lose her eye but it looks better, today. Wahoo for that! 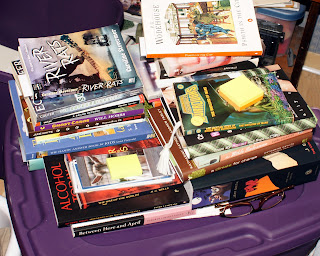 How did the Readathon go, for those of you who participated? I did an unofficial half-readathon (sort of a fun run as opposed to a marathon), partly because I knew I wasn't going to have a lot of time to read and partly because I figured if I turned the computer on at all, I'd waste time on it -- and I wanted to just get a feel for this readathon business.

I starting piling up books and just kept on piling. You can see from this photo that I ended up well stocked with 4 stacks of books, reading glasses, a pile of homemade bookmarks and some Post-Its. I'm not sure if you'll be able to enlarge, what with the blogger hinkiness of recent days, but there's some good stuff in those piles and way too much to list.

Friday night, with the cat locked into the bathroom because of Intestinal Difficulties (didn't want to have to chase her around to clean up after her) and loudly scratching at the door, crying out "Bookfool is an Evil Cat Mommy", I turned off the house lights, closed my bedroom door in the hope that the cat would settle down and started to read Not Becoming My Mother by Ruth Reichl, a memoir that I chose because it's only 112 pages long. It depressed me because I'm basically a 50's housewife transplanted into a decade when women who stay at home get funny looks and it was about how unhappy her mother was being stuck at home. Beautiful writing, though.

The next day, I woke up . . . well, not particularly early, but at about 9:30 I staggered around and began reading with the aid of a Mt. Dew (my caffeine of choice). I finished Not Becoming My Mother and then just went from book to book. These are the books I worked on (although I bought two of those while picking up my husband, so I didn't begin reading Cross My Heart and Hope to Spy and Out of Boneville (the first Bone graphic novel -- more on that whopper book of Bones in a minute) until after returning from bookstore, Target, airport and Mazzio's: 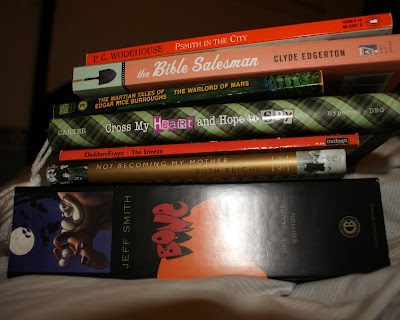 Finished:
Out of Boneville by Jeff Smith (Graphic Novel - Book One from the One Volume Edition) - 149 pages
Not Becoming My Mother by Ruth Reichl (Memoir) - 112 pages
The Sneeze by Anton Chekov (Plays) - 77 pages
Partial Reads:
Psmith in the City by P. G. Wodehouse (novel) - 122 pages read (35 to go)
The Warlord of Mars by Edgar Rice Burroughs (pulp fiction) - 38 pages read
Cross My Heart and Hope to Spy by Ally Carter (YA) - 34 pages read
The Bible Salesman by Clyde Edgerton (novel) - about 30 pages read (kept falling asleep, oops)
Between Chekov and Wodehouse, I was immersed in a good bit of comic genius and that kept my attention nicely. I bought the Bone book because I wanted to toss a graphic novel into the mix but all that was available was the volume of all nine graphic novels. Bone is terrific: adventurous, scary, funny! I can't wait to read on and I'm so glad I forked out the big bucks for the huge collection. The only downfall is that it's not colored, but I used my 30% coupon on it (while waiting for hubby to call saying he'd arrived at the airport), so a $40 volume became $27.99 before tax. With the full 9 books, that averages to $3.11, per book. Yeah, I think I can handle B & W. While at Borders, I also bought Pretties and Specials by Scott Westerfeld and Cross My Heart and Hope to Spy by Ally Carter, so the photo of everything was taken after we returned from the airport. 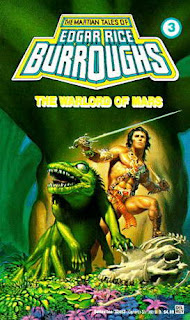 The Warlord of Mars

is an odd choice, isn't it? Obviously, it was the cover that caught my eye. See that green creature? That's the warlord's Martian dog, Woola. Woola makes me snort. The book itself is total crap. I don't know how else to put it. But, it's mildly entertaining crap, if you can stand the fact that Mars is a racially-divided, misogynistic world. I couldn't help but wonder if Edgar's true colors were showing. I don't have the book handy, but I believe it was originally published in 1910 -- certainly a very different world. I'm not actually sure whether I'll be able to finish it. We'll see.
I cannot wait to officially join in on the next readathon!!! I learned that there were some things Bookfool had pegged . . . trying to do a readathon with the husband around is impossible unless he's asleep. While he was awake, he was annoying. Fortunately, huzzybuns was jet-lagged and went to bed around 8:00. Wahoo! So, my reading was done in chunks but I did get to read a bit, last night. I'm a slow, slow reader and I'm very happy that I managed to finish a few books.

Now, I'm off to finish Psmith in the City. I just love Wodehouse, don't you? Hope those of you who joined in on the readathon are recovering. Since the posting is usually exceptionally heavy during readathon weekend, I'll do a mass delete in my reader for my sanity. It's okay if you don't have time to read this. For those of you who can focus . . . thanks for making it to the bottom of my post.