The Maze Runner by James Dashner -YA Dystopian Challenge read #2 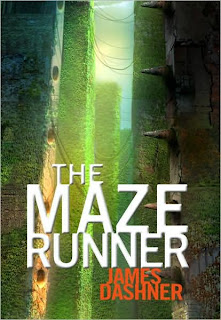 A giant maze. A group of teenagers trapped like rats in an experiment. Dangerous creatures that roam the maze at night. A sting that brings back horrifying memories of life outside.

When Thomas awakes in an elevator and emerges into the center of a maze, in a place known as the Glade, he has no memory at all and no idea how he arrived in this new world. Surrounded by other teenage boys who've been trapped in the Glade for as long as two years, Thomas begins his new life as the "greenie" of the group - learning about the jobs in the Glade, the Grievers that often kill those who don't make it back from the maze before giant doors creak closed, the rules of a strange new life.

Thomas knows he wants to join those who search the maze passages for an escape route from the moment he sees the runners arriving home at the end of his first full day. But, it takes time and training to become a runner and he's new. New people are not allowed to be runners; they're not even accepted until they've had time to prove themselves. Then, everything changes. A girl arrives -- the first female ever to show up. She brings a message and a handful of memories, but they're fading fast. Thomas has a fleeting sensation that he knew her before he arrived in the Glade.

The girl's arrival signals the beginning of the end. Is there any way out of the maze? Or, will everyone die, one by one?

The Maze Runner is my kind of book -- thrilling, action-packed, suspenseful and unique. The pages flew so fast I felt like I needed a seatbelt.

I probably should have done a self-interview for this one because I'm afraid I'll gush if I get going. So, I'm looking at my old Q/A format to nudge myself into talking about the right things. What, for example, did I think of the characters? I thought Dashner did an excellent job of creating believable characters with a broad variety of personalities. The leaders were a little difficult to distinguish from one another and most everyone could have used a bit more development, but I'm pretty sure I went where the author wanted to take me. I liked Thomas, adored his friend Chuck and thought Teresa was funny. When a character was angry or rude, I tended to side with Thomas because he seemed level-headed and reasonable in his curiosity.

The way Dashner doled out just a little information at a time and kept the reader hanging irritated me, at first, but then I began to actually like that style. Bread-crumb trails of clues not only kept the pages turning but also helped to reveal important details about Thomas, like the fact that he was clever and saw clues to potential escape from the maze as if they were pieces of a puzzle.

Gladers have their own slang, which practically sounded like a foreign language, at first. Little by little, Thomas finds out the meaning of the slang terms and begins to use their expressions. I loved the way they said, "Good that," much like the Australian, "Good on you." The word "klunk" and its meaning bugged me, though, because it was a little too graphic.

And, oh, those Grievers were scary. Grievers were like the Reavers of the Maze -- utterly terrifying and somewhat baffling. If that group of teenage boys were part of an experiment, as it appeared, why would anyone let loose deadly creatures in the Maze? Wasn't it bad enough that they were trapped and had to work hard just to survive? I had this image of the Maze, shrunk down to size with humans peering over the top, watching how the kids behaved, as I was reading.

I don't want to spoil the book, of course, but I will say that the ending was expected in many ways and yet satisfying. There was enough information held back that it still managed to surprise me. I can't wait to read the next book in the series. And, isn't that a terrific cover? My copy is an ARC that I requested from Shelf Awareness -- black and white, darn it. I absolutely love the dripping moss and vines, the huge concrete walls. That cover is by far one of the most accurate, apropos, perfect bits of artwork I've seen, this year.

I should also mention that one of the things that really jumped out at me was Dashner's skill level. The Maze Runner is loaded with the senses; you really get a three-dimensional feel for the atmosphere, the emotions, the feeling of being trapped in a maze and not knowing what's going on. This is a book worth buying, saving to reread just before the next in the series is released.

4.5/5 - Excellent, very tight writing, suspenseful, high on senses - a fascinating little world. Half a point off for heavy violence and the word "klunk" (because it's my blog and I can take off for a word, if I want to).

I'm going to call this book #2 of the YA Dystopian Challenge, even though I finished it just before the challenge began, primarily for the sake of linking back.

Suey's It's All About Books