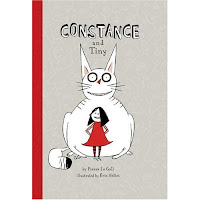 Constance and Tiny look sweet and innocent on that cover, don't they? Constance is, however, a little hellion. Her giant cat, Tiny, is equally rambunctious and shares in the terror. Much like Rotten Ralph, Horrid Henry or Dennis the Menace, Constance is a little girl who only knows how to behave badly.

In Constance and Tiny, we meet the pair and Constance describes her life:

My name is Constance.
I live in an evil mansion.
It's my parents' house.
They are terrible people -
unfair and mean!

With these words, we see a lovely little house with a pool, flowers blooming, Constance peering out of a window looking sullen and a smiling set of parents handing Constance a gift tied with red ribbon. It continues in the same vein, Constance's words always a stunning and hilarious contradiction to the illustrations.

Eventually, Constance steals some money from her mother's purse and runs away from home with Tiny, but they're "captured" (by the police), taken to "their hideaway" (officers are shown handing Constance some candy) and then "they tried to suffocate me" (her parents show up and give her a hug -- little red hearts exploding over their heads). Oh, those diabolical parents. The book ends with the words, "It's exhausting being good all the time!"

I've never been a huge fan of rude, rotten child characters, but I have to admit that I find the contrast between words and illustrations in this book charming and funny. 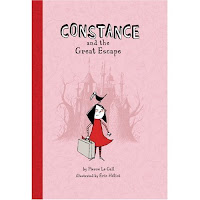 Constance and the Great Escape is a continuation of this series by French author Pierre Le Gall and illustrator Eric Hieliot.

In Constance and the Great Escape, Constance's troublesome behavior and pranks at school get her into so much trouble that she's sent to Jolly Boarding School without her "adorable little cat", Tiny. Constance quickly realizes that Jolly Boarding School is all about discipline and rules. In order to "escape", she decides she must behave like the perfect student.

Constance grins maniacally as she bathes with ice-cold water, calls her breakfast of boiled oats and prune juice "tasty", smiles as the class practices discipline with a run uphill . . . in short, she behaves like a perfect little angel. The headmistress calls her parents to request that they take her home. "You have wasted my time!" she says. "This is not the place for your child. We are busy with difficult children here."

As they pack up to leave, Constance peers into the the office of the headmistress, where she has left a little gift -- a bucket of water attached to a rope with a candle slowly burning against the rope, a tack on the chair upon which the headmistress is about to sit. "Now that's a child who seems to be on the right path," says the headmistress. The book closes with a picture of Constance cuddling with her humongous cat. "No one can separate me from Tiny, my adorable little cat," she says.

I feel so fortunate to be able to review books like Constance and Tiny. My half-blind kitty is not currently posing for photographs, due to her funky eye, although I did sit with her to read the two books. You can view a slide show of Constance and Tiny images at the Sterling Books website to get a nice view of the illustrations.

5/5 - I can easily visualize myself reading these books over and over and over to little ones or imagine seeing young readers curling up with them on their own (they're great for early readers).

My thanks to Sterling Books for the review copies! This is post #2 for Children's Book Day! I was going to write three posts but the other two books came to me unsolicited and the more I look at them the more I'm unsure what to say about them or whether I even like them, so I'll stop with those reviews of the three books I really loved.
Posted by Bookfool at 12:48 PM