Sunday Scatterberry Pie and Roll Call -- a little bit of everything, in the usual fashion 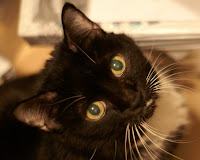 I've just finished giving my cat her medicine, which essentially means trying to get her to swallow some antibiotic drops and ending up with antibiotic spit all over my hands. You've never had any fun until you've tried to pill or give drops to or put ointment in the eye of a lovable but feisty cat. That's an old photo at left, of course. Her left eye is completely black and she obviously can't see out of it, but she's already figured out how to jump up onto the futon and down onto the floor without incident. I'm so impressed with her adaptability. Miss Spooky: my hero.

I finished Crossing Myself by Greg Garrett, last night, and I know I'm going to have a terrible time reviewing it because the book is so meaningful that it hurts my head to think of distilling it down into a few paragraphs' worth of review. I'm considering just posting quotes -- nothing but quotes. Well, maybe a little bit of description, but I'll tell you about it a bit, right now. Greg Garrett is or was a tenured university professor at Baylor in Waco, Texas. He was successful in his teaching and in his published writing, but his private life was a disaster -- three divorces, two kids, often out of money and chronically depressed for over 20 years.

In 2002, he came this close to committing suicide but instead discovered the real meaning of faith and, while teaching at a Baptist university, began attending an Episcopal seminary. He talks about his life in those years, as he went from complete and utter mess to loving his life. This book is so cool. I ordered Crossing Myself from Paperback Swap because I've got another Garrett book for review, a recent release called No Idea. I can't wait to see what new things he has to say. 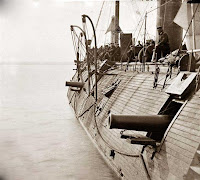 I heard the best story, yesterday. That's a photo of an iron-clad Confederate boat, at left. You'll understand why I chose that image, shortly. Kiddo has had to throw in the towel for the rest of the swim season because his shoulder injury was getting far too painful, so we were shopping for running shoes in Jackson. I figured if he's not going to have swimming to keep him in shape, we should train to run together (although you can imagine I'll never be able to run at the pace of a 6-foot, 17-year-old boy).

While we were shopping, we ran into one of my husband's work friends and he had a great story to tell. We'll call him Bob. Bob had to speak at a briefing, last week, and he and the other speakers went into it knowing the meeting was going to be extraordinarily dull. So, to ward off the boredom, they dared each other to insert some totally impossible word into their presentations. Bob was challenged to use the word "aluminum" in his part of the briefing. Aluminum, of course, was totally off-the-wall and plays no part in anything about which he was to speak, but he was determined to get that word in there and what he came up with was, "This is not an iron-clad plan. This is an aluminum-clad plan." After the presentation, the Big Boss came up to him and said, "What was the deal with the aluminum remark?" And, Bob went away with a really great story that made us laugh our socks off in the aisle of Academy Sporting Goods. I wouldn't mind hanging out with Bob. He is one great storyteller and an incredibly cheerful, upbeat guy.

I'm currently reading a bunch of books, as always. I sometimes wish I could reign in my ADD brain and focus on one book at a time, but I actually tried to finish up $20 Per Gallon and discovered that it's best taken in small chunks (at least for me). So, I'm back to reading 3-page bits and pieces. It's a good book. I'm particularly fascinated with the descriptions of the new South Korean city, Songdo, which is being built entirely as a compact, energy-efficient satellite city that sounds a lot more like the Jetsons' world than anything I would have expected to exist in my lifetime. I'm thinking the book is a good one for people who plan to do world-building in preparation for writing science fiction. 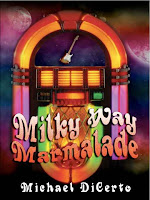 seems to be the book that I can't stop burying, lately -- the one that needs a neon flag attached. I may set it aside for a week or two because I've got quite a list of books that I feel obligated to finish before the end of the month, even though I only have one remaining tour. Or, maybe I'll just restart it. I apparently love weighing myself down with nonexistent obligations.

lost me at the halfway point. A book composed entirely of questions is fun . . . to a point. And, halfway was it for me. I can imagine it would generate some great discussion -- say, if a group were to read it and each individual choose his or her favorite questions for everyone to answer. But, as far as reading the entire book, the problem is that there's no story and no particular direction. Its a totally random book with question after question, most of which are not interconnected, although sometimes he goes on for a while with a particular train of thought. It made my son and me laugh when we read it aloud (and blush when one or two of the questions were sex-based) but there's a limit to how far you can take the fun. It should be a board game, not a book, I guess.

is still grabbing me but took second place while I finished up Crossing Myself, last night. It seems likely that it will be the next book finished, if only because just thinking about it makes me want to kick my husband off the futon and curl up with it. But, I have things to do, so he can stay there and play with his little toy (some electronic Applepod thingy).

As to the Roll Call mentioned in my subject line . . . there's another story. I had around 240 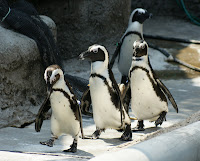 hits in 24 hours, just after posting the zombie book review and I made the assumption that maybe people were looking up the zombie book, but just to find out I went on one of my rare jaunts to StatCounter and discovered that my hits were all over the map, as far as the searches that led them to my blog. When I first put up my stat counter, I fussed over the numbers and wondered what I should do to change things to keep people coming back. And, then at some point I decided that numbers are meaningless and I'm not in this for anything other than a mode of expression. I'm not blogging for free books. I'm not blogging to make money. I just need an outlet to babble about the books I love and a place to write freely.

Yesterday, I made the near-fatal mistake of looking at keyword analysis and then from there I ended up looking at unique visitors vs. return visitors and found that my statistics show that people don't return to my blog. That isn't entirely borne out by the comments but I know that some people I used to think of as "old faithfuls" aren't returning to my blog as often as they used to and that bothers me. After looking at my stats, I was ready to stop blogging right at that moment, close up shop, hide my blog and disappear. But, then I remembered checking off Day by Day Armageddon, last week, and saying to myself, "4 down, 17 to go." All of which means, I still feel burdened by the books that have been sent to me but not yet read or reviewed, so I'll keep chugging away.

But, I'd like to know who is out there lurking. Readers like Google Reader distort statistics because people often read a post but don't click through to comment. I'm pretty sure the fact that 56 people follow me in that little Google Friend thing that you can't find unless you go to my "about" page says something; and, the others who use readers of various types are still there but not always commenting. Still, I'd like to know, so if you could step forward and comment -- just say, "I'm here," it would help ease my mind.

I'm off to get ready for my Bible study. My own reader is oppressively heavy, again, and this week my son is off for "intercession" so I'll be in and out a lot. Kiddo needs to be entertained or he'll spend all day shooting at bad guys and watching movies in the dark. I wish everyone a wonderful week. If I'm unable to comment on posts, it's a temporary thing. I'll be back next week. In addition to dealing with intercession entertainment, we've got the Poison Guy to look forward to and a carpet installation, mid-week. Kiddo has a doctor appointment and will still show up for swim practice, even if he's not swimming. I have photos to load to the swim blog and cleaning and paint touch-up to do in preparation for the carpet dudes. It's going to be a busy week. Happy reading!

Don't forget to tell me you're out there, please!! Happy Sunday!