Christian the Lion by Anthony (Ace) Bourke and John Rendall 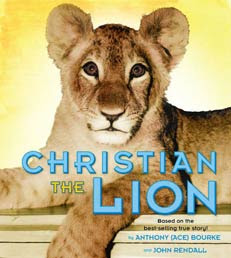 It's Children's Day at Bookfoolery!!

In tiny print on the cover of Christian the Lion, you may be able to see the words "Based on the best-selling true story!" I'm guessing that simply means the story has been boiled down to children's size (as opposed to, "We fictionalized this sucker") because it is known to be the true story of two men who bought a lion cub at Harrod's in London, raised it in their home and then released Christian in Africa. The video of the two men reuniting with Christian went viral on YouTube, not that long ago.

Christian the Lion is a lovely, lovely book and a tender, poignant true story. The layout looks like a scrapbook, with numerous black and white photographs that show the story of Christian from the time of his adoption to the final photos as Christian broke into a run and then "hugged" one of the men. Text and backgrounds are creatively and neatly placed, clearly written and simple enough to read to a fairly young child but not so babyish that an older child who loves animals should feel put off.

The slipcover is gorgeous, shiny, and textured. I absolutely love this book!

A commenter at Amazon has mentioned that there is an error in the book and Africa is referred to as a "country" rather than a "continent". I looked for this error and found it; elsewhere, Africa is simply referred to in general terms. England, London and Kenya are pointed out on very basic world maps. Hopefully, the error will be fixed in future editions. I've actually blacked out and corrected errors in children's books if I consider them serious, but I probably wouldn't have bought them in the first place if I'd known. This one doesn't bother me. Africa is a continent. One line, one word. I'll fix my copy and keep it.

5/5 - Perfect for the animal-loving, cat-crazy kid or adult in any family; a lovely story of affection between humans and pet.

Further information on the lion and how two Australians managed to raise a lion in an urban environment -- the very hip Chelsea in London, 1969 -- can be found at Today's website. Because the story was written for children, it obviously doesn't go into painful detail and the website answers additional questions. For my part, I plan to look for the complete memoir, as well.

Christian the Lion is Book #1 for Children's Day. More coming, soon!
Posted by Bookfool at 6:00 AM