Day by Day Armageddon or Pardon me while I bite that juicy ankle of yours and turn you into a zombie . . . by J. L. Bourne 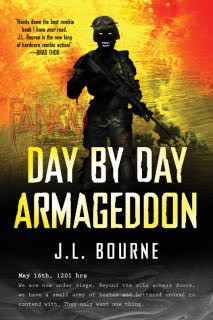 Day by Day Armageddon by J. L. Bourne
Copyright 2009
Pocket Books - Fiction/Horror/Zombies
199 pages
I fell asleep early and woke up late, so I'm not quite finished with this book (and a storm is coming, which means I need to go ahead and write before I must shut off my electronics).
Day By Day Armageddon tells the story of a man in the American military surviving against growing odds. When a plague hits China, American doctors are sent to help determine the cause and stop the plague. But, it quickly becomes apparent that the disease is spreading too rapidly and even the doctors are not returning. Americans are evacuated from embassies in China and other far-east posts, but it's too late. Someone has brought the disease to the United States.
Called in to his military base, the nameless rogue diarist has already been stockpiling Meals Ready to Eat (MRE's), guns and ammunition, water and other supplies he thinks he may need to wait out the spread of the illness. Then, the truth comes out. The plague causes people to die and then come back. Zombies are roaming the streets and they kill with a single bite.
As the book progresses, our hero finds that he is not alone. He and his neighbor John take jaunts out of their homes to acquire food and supplies, then eventually have to leave San Antonio. As the book continues, they slowly pick up more refugees and they're no longer lonely but now they have to deal with the need for more food, more medical supplies, more drinks. Will they survive or is it too late for the few survivors and the world in general?

I flipped to the end of the book because I'm that kind of girl and it turns out the book is "to be continued". So, even if I'd made it to the end before I sat down to write, I know there's more to come.

Written as diary entries, the story is told entirely from our rogue's viewpoint. Harry wrote a fantastic review at Temple Library Reviews. As he mentioned, the nameless protagonist is a bit like McGyver, jerry-rigging devices to keep the zombies out while they forage for food or sleep for the night, hot-wiring cars, creating diversions. I loved that. The book is suitably creepy and sometimes a little gross, with descriptions of rotting flesh -- which, I suppose, you have to expect from a zombie book that takes itself seriously.

The downfall of this book is terrible English. At one point, the protagonist mentions his typos. I'm assuming his entries are typed on a laptop, although there are fake smudges, circles, underlining, etc., in "handwriting"-type script to give it the appearance of having been printed out and remarked upon or added to. Unfortunately, it's not just typos that get in the way of smooth reading. Poor grammar, misused words, misspellings -- you name it, English teachers would have a field day with their red pens (and an editor should have). I'm assuming the idea was to leave it be and make the entries appear genuine, but not editing made the writing very, very rough and sometimes you have to figure out which word is missing or translate the meaning.

Regardless, Day by Day Armageddon is a fun diversion. My son and I had a great conversation about the book, yesterday. I told him it was basically one man against the world and he said, "That would be like Dawn of the Dead." I said, "Really? That's a movie with a rogue hero?" He said yes, and then started to tell me what kind of supplies you need for a zombie invasion and I informed him of what he was forgetting. If you have a teenage boy nearby, preparation for a zombie invasion is a tremendously fun topic. Day by Day Armageddon is not a well-written book, but I like survival and had fun imagining what I would do if I were in our nameless protagonist's place. He doesn't simply hole up in his house for the duration, so there's plenty of action.

3.5/5 - A fun diversion but errors in grammar, spelling, etc. make it hard for a person with an editor brain to get through.

See the little bend in the left-hand side of Mississippi? Mississippi is the state with Jackson as its capital, in case you're not proficient in geography. We're at that bend in the river. I've borrowed this radar snap from Weather Underground to show you what's coming. Yikes. Batten down the hatches! I've got to make a Walmart run, and I think I'd better hurry.

Kitty is on the mend and I should be able to bring her home, this afternoon! Wahoo!!!! Thanks to Sarah Reidy and Pocket books for letting me join in on this tour. Hope everyone has a fabulous day!

Update: Expensive Kitty is home! She looks terrible and appears to be completely blind in her bad eye, at the moment (she's a bit stumbly), but she's obviously glad to be here and is eating well. We only got a little wet. The blustery wind of this morning seems to have petered out when the rain arrived. I've finished the book and toward the end Harry's comments about the book being entirely plot-driven without much depth to the characters has been reinforced but the book is about constantly moving to escape a growing threat so the characters don't necessarily require a great deal of depth. I love the fact that the cast, which grew as Unnamed Protag picked up a few stray humans, seldom stayed in one place for long because it keeps things moving. Hopefully, the publishers will bother editing the second book. All those errors were really annoying, but I still had fun reading and thought it was worth the time.

I neglected to warn that there's plenty of violence, gruesome description and bad language. It's not constant, though. Mostly, it's a story of survival and an entertaining, escapist read.

Update #2: It just occurred to me that since this book is suspenseful and creepy, it qualifies for the RIP IV. All right! Another challenge book down! I'm finally actually succeeding at a challenge!! Party on, dudes.