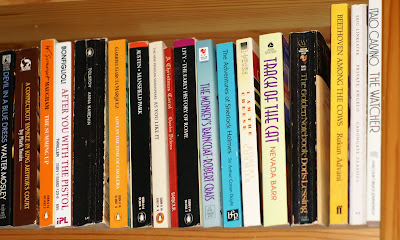 November was a surprising reading month, simply because I assumed that NaNoWriMo would make my reading come to a screeching halt. There were days that I couldn't focus at all, but I still managed to read quite a few books and November ended up being an excellent month.

168. Pretties by Scott Westerfeld (YA/Sci-fi) - The second in the Uglies series. Tally is now a Pretty but before undergoing the surgery, she wrote herself a note to remind herself that there's more to being a Pretty than meets the eye. With her new love Zane, she undergoes an experiment that has surprising results for Tally but leads to agony for Zane. I didn't like this book quite as much, but the more I think about it the more I love it. Zane is a fabulous addition to the cast.

169. A Climate for Change by Katherine Hayhoe & Andrew Farley (Science/Chr) - An extraordinarily readable book on climate change that answers questions and explains all the myths without venturing into politics. The book is directed at Christians but makes sense of so many things I didn't fully understand that I'd recommend it to anyone and everyone.

170. Found by Margaret Peterson Haddix (YA/Sci-fi/Time Travel) - A plane mysteriously appears at an airport gate and inside is a shocking surprise. Years later, two young boys receive the same cryptic note and discover the only thing they have in common is that they're adopted. Their search to unravel a mystery leads to the discovery of a time-travel conspiracy. Coolness. Loved this book; can't wait to read the next in the series.

171. $20 Per Gallon by Christopher Steiner (NF/Bus/Energy) - "How the Inevitable Rise in the Price of Gasoline Will Change our Lives for the Better" is the subtitle and this book is definitely optimistic. The author predicts that higher cost of fossil fuels will lead Americans to do more walking, eat better foods, pollute less and help build a better world. Fascinating reading.

172. Among the Hidden by Margaret Peterson Haddix (YA/Dystopian) - In a future world where families are limited to two offspring, Luke is a third child -- always hidden, always in danger. Then, one day he discovers there is another third child in his neighborhood. But her scheme to oppose their oppression is dangerous. Another interesting dystopian read, the first in a series.

173. The Church of Facebook by Jesse Rice (NF/Psychology/Chr) - Rice describes our shift in social lives, how our worlds have been shrinking down to little social communities on the Internet. But he puts a positive spin on the pitfalls of social networking by ending with a list of ways we can be more mindful about our use of the Internet. Mostly psychology, totally fascinating and vaguely spiritual.

174. Bone, Vol. 5 - Rock Jaw, Master of the Eastern Border (GN) - Another of the Bone graphic novels, this time with the addition of a giant mountain lion who isn't fond of either rat creatures or dragons. I just love this series to death.

175. The Blue Umbrella by Mike Mason (YA) - When a young boy's mother is killed by lightning, he is snatched up and taken to live with his evil aunties. His only friend is the owner of the general store, who carries a secret with him. This book was just a bit too upsetting for me but it's definitely a unique story.

176. Into the Wild by Sarah Beth Durst (YA/Fantasy) - The Wild lives under Julie's bed and aside from occasionally stealing something and turning it into a magic item, it seems to be fine. Then, one day someone wishes the Wild free and chaos reigns as the world of fairy tales sucks Julie's family (mom Rapunzel, brother Puss-in-Boots, grandma who likes to cook children) back into their stories. Only Julie can rescue them from a fate worse than death. LOVED this book like crazy.

177. Against Medical Advice by James Patterson & Hal Friedman (NF/Memoir) <---mini review w/in text of post - The true story of how a boy who suddenly developed Tourette's syndrome, anxiety and Obsessive-Compulsive Disorder eventually learned to get control of his life after years of failed medical treatment and useless drugs. Quick, engrossing read.

178. The Foundling by Georgette Heyer (Hist.F) - A coddled duke, sick of being waited on hand and foot, sees an opportunity to help his cousin and escapes to do a good deed. But, his good deed grows complicated when he ends up with an orphaned beauty and a rebellious teen tagging along. Adventurous, funny, charming - I adored the Duke. I want him to come to life and sweep me off my feet.

179. How to Lower Your Cholesterol with French Gourmet Cooking by Chef Alain Braux (NF/Cooking/Health) - A nutrition book with about 1/3 recipes, written by a chef who is also trained in nutrition. This is the most practical cookbook I've found in eons. Well worth the price - everything we've tried has been excellent.

181. Letters to Darcy by Tracy Ramos (NF/Memoir/Chr) - The letters a mother wrote to her unborn child, originally on a blog. When Tracy was told her unborn child had Trisomy 18 and would not likely even survive till birth, Tracy chose to continue carrying her child to give her a chance -- and the baby survived a full two weeks after birth. An amazing testament to life.

182. How to Roast a Lamb by Michael Psilakis (NF/Cooking/Memoir) - Part cookbook, part memoir. The author has run a series of restaurants in which he has gradually refined his cooking by updating many of the recipes from his childhood in a large Greek (Cretan) immigrant family. Fun reading but most of the recipes are too complex or contain ingredients that can be difficult or impossible to acquire outside of the big city.

183. Logan's Run by Wm. F. Nolan & George Clayton Johnson (Sci-fi) - Buried treasure! I found my elderly, beat-up copy of Logan's Run while cleaning house and plopped right down to read it. The authors did some unique and skillful world-building. I found the book utterly gripping.