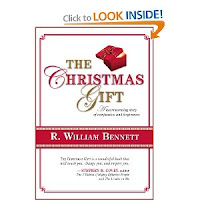 The Christmas Gift by R. William Bennett
Copyright 2010
Burgess Adams Publishing - Seasonal/Fiction
139 pages
As The Christmas Gift opens, a businessman is sitting in his lawyer's office. Red with anger over something that offended him and eager to sue, the man's lawyer asks him to listen to a story before he makes a decision about whether or not to proceed with legal action.

The story the lawyer shares is the tale of Ben and Scott, two sixth-grade boys. Scott's family moves frequently and he blends into new groups with relative ease. But, when he moves to a new town and finds himself the target of a bully named Ben he becomes angry enough to say something cruel. Ben has taunted Scott and done numerous things that offended him, but the look on Ben's face when Scott's speaks his mind is obviously a look of pain.

Scott's a good kid and he feels bad about having obviously hurt someone. Bully or not, he decides Ben deserves an apology. What he finds when he goes to apologize is that an apology can be much more powerful than he realized. Ben not only forgives Scott, but they become the best of friends.

I won't share why Ben acted out or how the story ends, to avoid spoiling it for anyone, but I really thought it was well done.

What I love about this book:

The Christmas Gift is essentially a story of what happens when someone takes the time to apologize and listen to the other person's side, even when it seems as if they don't deserve to be heard. I read The Christmas Gift several weeks ago, during the week that several suicides caused by bullying (or, in the case of the gay student who was filmed, a tremendously cruel invasion of privacy) were in the news. We've dealt with our share of bullies and one thing I've learned from our variety of experiences is that there are different reasons people become bullies and some bullies simply act out in order to seek attention.

That's the case in The Christmas Gift. Ben isn't a bad person; he just doesn't have any genuine friends and picking on people is his way of getting attention. This is, I guess, the other side of bullying, the side in which a little kindness extended to the bully, of all people, goes a long way.

Although the circumstances are slightly different and The Christmas Gift is a much more heart-tugging story, it rang true to one of our own bullying experiences so I didn't find it sappy or difficult to believe, as I often do with similar books that are basically lessons in strength of character. My eldest son (when he was around kindergarten age) once became best friends with a little boy who bullied him, simply by firmly stating that he wasn't going to tolerate being hit and walking away. The young bully didn't realize his behavior was inappropriate and really just wanted a playmate. He apologized and promised not to hit, again, if my son would come back to the sandbox (our townhouses opened onto a shared courtyard). Both boys and at least one young mother learned an important lesson in behavior and friendship.

Very little. It is pretty predictable. But, it moved me to tears and touched me deeply. I didn't mind the predictability at all.

Boy, am I sucking at reading, this month. Wake by Lisa McMann was the only grown-upish (YA, awfully short) book I managed to finish, last week. I could blame it on physical therapy, which does shoot a 3-hour hole in 2 of my days, but it was really the shopping and zipping over to visit Kiddo afterwards that did me in, wore me flat, kicked a hole in my reading time by making my eyes blur and all that.

As to the books with bookmarks in them . . . sigh. I have enjoyed the little I've read of each but must confess that Désirée is the only in-progress title I've really touched, this past week. And, since I'm in a YA mood (and busy, busy, busy) I haven't gotten very far on that. I might have to declare Wednesday a Personal Readathon Day, for the sake of finishing a few books.

A big bag of library books. Oh, no!!! I do not need to bring home library books!!! I'm so not going to get to them. I already know that. Someone swat me (a virtual swat will do, thank you). I did, however, also check out my first audio book, ever, ever. I'm figuring I should make good use of my car time on physical therapy days. I checked out Revolution by Jennifer Donnelly, which is highly recommended by Tammy. And, I donated 10 books, 3 of which were Very Large. So, that's good. There is much book purging to be done.

Gotta dash. Must read and possibly extract Isabel's claws from the window screen. Silly little kitty. If she knocks the screen out of the window, we are both going to be so bummed. It's pleasant outside, but judging from the way she bodily flung herself at the window when Vampire Kitty walked by, I don't think she'd really like to spend much time in the great outdoors.

Any great malarkey happening in your life, this week?

©2010 Nancy Horner. All rights reserved. If you are reading this post at a site other than Bookfoolery and Babble, you are reading a stolen feed. Email bookfoolery@gmail.com for written permission to reproduce text or photos.
Posted by Bookfool at 2:07 PM