Under the Overpass by Mike Yankoski (review) 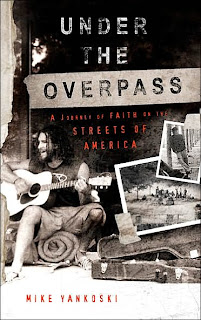 Under the Overpass: A Journey of Faith on the Streets of America
By Mike Yankoski
Copyright 2005/2010 reprint
Multnomah - Memoir/Christian
235 pages

I sat there in church struggling to remember a time when I'd actually needed to lean fully on Christ rather than on my own abilities. Not much came to mind. What was Paul's statement in Philippians? "I have learned what it means to be content in all circumstances, whether with everything or with nothing." (Philippians 4:11-12)

The idea came instantly--like the flash of a camera or a flicker of lightning. It left me breathless, and it changed my life. What if I stepped out of my comfortable life with nothing but God and put my faith to the test alongside of those who live with nothing every day?

Mike Yankoski was a college student when the epiphany he described above took place. Troubled by "the hypocrisy in my life" and the concern that he wasn't doing enough as a Christian to help others, Mike decided to spend time living with almost nothing, sleeping on the ground and in shelters, carrying his few possessions -- including a guitar for the purposes of begging -- with him. But, he didn't think it would be wise to play the role of a homeless man alone, so he recruited a friend. Together, Mike and his friend Sam spent 5 months on the streets of a number of different cities: Denver, Washington, D. C., Portland, San Francisco, Phoenix and San Diego.

I'm not quite sure why Mike and Sam chose to move around from one city to another, but each city had a unique character in the way residents treated their homeless, how those who lived in each city became homeless (there were quite a few veterans in D.C., for example) and the amount of money they were able to earn by singing for donations or, sometimes, flat-out begging. Most of the time they didn't make enough to get by and they often went hungry or ate very nasty food -- whatever they could acquire with each days earnings.

As they spent nights in a shelter (in Denver, to break into their new life slowly) and then in parks, under bridges and on the streets of their chosen cities, they learned about what the homeless really need, experienced plenty of humiliation and a great deal of personal discomfort, and were deeply touched by a few random acts of kindness.

An incredibly eye-opening, powerful read. I can't imagine how anyone could close this book and not see the world in a different way and yearn to help in some manner. Not Christian? Personally, I don't think that matters. You can ignore the Christian message and just read Under the Overpass for the glimpse into what life is like for the homeless. You'll get an idea who exactly is adrift and why, find out what you should and shouldn't do to help the homeless, and find yourself very, very thankful for soap, water and food.

The night I finished reading Under the Overpass, I closed the book with a growling stomach. It is still difficult to look at food the same way after reading about what it's like to live without food or have to dive into the garbage to grab someone else's leftovers. I spent a lot of time just looking at my food, that night, thinking about how much a plate of nachos would mean to someone who hadn't eaten all day.

What surprised me about this book:

I was stunned to find that even when they managed to buy food to pack away for later, they had to deal with things like rats . . . on the beach. Ewww.

I was not surprised to learn that a great majority of the homeless are either drug addicted or mentally ill, but I was surprised by the way people treated them. Ignoring them is one thing, but Mike and Sam were constantly told they had to move, denied the opportunity to eat restaurant leftovers that would have gone into the garbage anyway, and heckled. Occasionally, they heard people talking about Christianity -- one time, comparing favorite Bible translations -- but obviously without even contemplating offering food or help to Mike or Sam. They were taken out for a meal once. Here's another passage I love:

An ongoing struggle to find safety, a place to sleep, a bathroom, and food becomes dehumanizing for anyone. One experience at a time, a person's sense of dignity and sense of self-worth gets stripped away. I don't know what the experience would be like for someone who has lived on the streets for thirty years.

But I do know this: blithely allowing this terrible stripping to occur is a blot on the conscience of America, and especially on the conscience of the church. If we as believers choose to forget that everyone--even the shrunken soul lying in the dooryway--is made in the image of God, can we say we know our Creator? If we respond to others based on their outward appearance, haven't we entirely missed the point of the gospel?

What I kept coming back to:

My kids and I (or, maybe just one of my children) were eating outdoors at a local Sonic several years ago when a homeless man showed up and sat down. The outdoor eating facilities are pretty limited but I'd say the fellow was probably about 15-20 feet away from us. His smell was unbearably rank. He wore layer upon layer of clothing (which is enough to make anyone smell bad, in Mississippi, although it was an unusually pleasant day). We were disappointed to find that we couldn't tolerate the smell and had to leave.

It didn't even remotely occur to me that the nicest thing you can do for a homeless person is buy him a meal and talk to him. Yankoski advises readers to talk to the homeless and feed them, take a coat you're not using from your closet and give it to a homeless person on a cold night (but don't go alone), or volunteer at a homeless shelter.

My thanks to Multnomah for the review copy of Under the Overpass. I'm planning to pass this one around to some church friends and I've contacted a friend who does volunteer work at a local shelter. She's going to put me to work, soon.

Fiona Friday will be delayed till Saturday afternoon, but don't worry. It's a comin'.

©2010 Nancy Horner. All rights reserved. If you are reading this post at a site other than Bookfoolery and Babble, you are reading a stolen feed. Email bookfoolery@gmail.com for written permission to reproduce text or photos.
Posted by Bookfool at 8:34 PM