The Human Bobby by Gabe Rotter 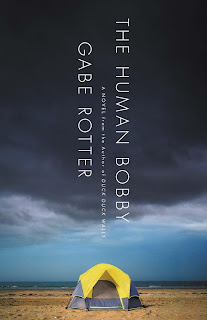 Bobby Flopkowski has everything a man can want: a lovely wife, a dream house in Beverly Hills and a new baby. He's a successful physician who shares a practice with a good friend. Then Bobby's first love shows up and as one small but meaningful mistake leads to a complicated set of events, disaster and heartbreak, Bobby's life is altered, forever.

At the beginning of this novel, Dr. Flopkowski is a homeless addict living on a beach. He's been sharing a tent with a friend and is completely cut off from his old life. Now, without a wife, a child or a home, he reflects on how his life unraveled and eventually has a revelation about the crime that led to his downfall. Convinced he can get back the life he used to love, Bobby sets out to gather evidence. Will anyone believe Bobby has discovered the truth? Or is Bobby simply too far gone on drugs to know what's going on?

I had a terrible time trying to decide what to write about this book because of its ending. I don't want to give away the ending, but let's just say you're expecting one thing and then the author completely turns the entire concept on its head. Like? Dislike? Rough question. Initially, I was stunned and dismayed by the ending because I felt like Gabe Rotter had been yanking my chain, and yet I flew through the book and felt prone to forgive the ending and mentally rework it on my own. The Human Bobby is well-written with believable, often annoying, characters. As Bobby makes mistake after mistake, you get the urge to talk to him. "Noooo, Bobby! Don't do that! Your wife will never forgive you! That person might be dangerous!" I felt very invested in the life of the protagonist.

So, apart from that ending, I loved the book. I'm still waffling about the ending. If you don't mind having everything thrown totally out the window and a new concept dumped in your lap at the end, The Human Bobby is a good book, a bit of a quick drag behind a fast car and surprisingly hard to put down. But, there seem to be an awful lot of doctor-gone-bad books, so I wouldn't say it's wholly original. The characters are unique, the ending has a "used" feeling and was a bit of a let-down.

Good writing, interesting characters, and a bit of a page-turner as the reader anxiously speeds to the conclusion. But, that ending . . . I just didn't care for it. The more I think about it, the more I wish he'd taken the reader to the expected ending. However, The Human Bobby would be a decent book club read, simply because I think the reaction to that ending would be mixed and make for interesting conversation. What if it hadn't ended the way it did? One could discuss Bobby's downfall, as well. Did everyone see it coming? What choices should he have made? I think there's a lot of fodder for discussion.


©2010 Nancy Horner. All rights reserved. If you are reading this post at a site other than Bookfoolery and Babble, you are reading a stolen feed. Email bookfoolery@gmail.com for written permission to reproduce text or photos.
Posted by Bookfool at 8:50 AM