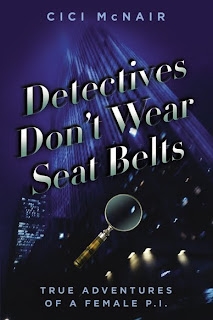 Cici McNair grew up a tomboy in Mississippi with a verbally abusive father who told her, when she was a mere 5 years old, that he was going to kill her someday. Determined to escape, she saved money in an envelope tucked into her copy of Kon Tiki and eventually moved away. College in New York, followed by a series of jobs around the world, a short-lived marriage and a string of romances kept her from settling down until a broken engagement in Rome sent her fleeing to New York.

Broke and looking for another adventure, Cici decided to become a private detective. She quickly discovered the world of private investigation is both a man's world and a tight-knit community. It took a lot of determination to get her first job but she found that her journalistic skills and knowledge of the world served her well.

Detectives Don't Wear Seatbelts tells Cici's story, told in 4 parts. The book begins with McNair's first job in New York, followed by several months living with her mother in the Jackson area in Mississippi, working through her feelings about her early life and getting to know her mother as a friend, and then back to New York, where she worked for a different agency and eventually moved on to owning her own business.

What I loved about Detectives Don't Wear Seatbelts:

What a fascinating life Cici McNair has had!! Half the time, you'll wonder if she's even telling the truth, her adventures have been so numerous and dramatic. Obviously, some of the details of her cases and a few names of acquaintances (like, say, that arms dealer who wanted her to travel with him to Eastern Europe the day after she met him) must have been changed. The gist, though, is that she's had a truly amazing life and it's worth reading about.

Sometimes the talk about her fancy dates and high life did get a little annoying, but maybe that's just because I've had such a bland life by comparison. There were also occasional references to places or terms that were unfamiliar -- and some that I recognized but realized a lot of people wouldn't "get", like her mother's comment, "Let's take the Trace." I knew she was referring to the Natchez Trace, a parkway that follows the historical path from Natchez, Mississippi to Nashville, Tennessee (there are places you can hike along the original Trace) but I don't think it's all that widely known. I could be wrong.

I like this book but I didn't love it, partly because she made me turn a really unattractive shade of Envy Green and partly because there were times I had to reread sentences or paragraphs because I wasn't quite sure what she was saying. But, in general, the book is well-written and utterly fascinating. There's some bad language from her co-workers, which I think you'd have to expect in her line of work.

I recommend Detectives Don't Wear Seatbelts to memoir lovers and those who enjoy reading about the real world of private investigation. Cici McNair has also written some novels, although I'm not certain whether she wrote them under the same name. I'm going to ask her, though -- I liked her writing enough to check out her fiction.

I have 8 reviews and 1 DNF post to write, at this point. And, I need to wrap up the Everything Austen II Challenge, which I've completed. Do you think I'll ever catch up? Sometimes I wonder. I'd better go read. I'm perpetually behind on that, too. And, let's don't even get started on blog-hopping. I just noticed one of my favorite bloggers hasn't posted since November 1. Where the heck have I been that it took me 10 days to notice? Somebody kick me. Okay, don't. But, you can chew me out if you'd like to, just for fun.

©2010 Nancy Horner. All rights reserved. If you are reading this post at a site other than Bookfoolery and Babble, you are reading a stolen feed. Email bookfoolery@gmail.com for written permission to reproduce text or photos.
Posted by Bookfool at 8:27 PM