The Ship of Brides by Jojo Moyes & an F2F Report 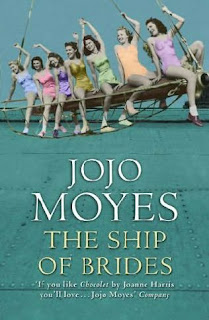 'Do you fancy going to one of these lectures?' Jean shouted, chewing gum as they made their way past the projection room. 'There's one on the strains of marrying a foreigner, next week.' Her voice, as it had all morning, carried over the noisy vibrations of the engines and the repeated piped calls, summoning Petty Officer Gardner or special sea dutymen to the commander's office.

Avice pretended not to hear her.

'I quite fancy the one on common difficulties in the first year,' Jean went on. 'Except our first year has been dead easy so far. He wasn't even there.'

But it was really the ship she loved: the size of it, like a leviathan, surely too huge to have been created by mere men, propelled by an epic strength through the roughest seas. She loved the scars, the streaks of rust that, despite years of painting and repainting, were visible on her skin, testament to the time she had spent at sea. Frances loved the infinite space visible all around her, the sense of boundless, irrevocable movement west. She loved the sense of possibility that the ship bestowed on her. The nautical miles and unfathomable fathoms that it opened up between her and her past as it glided through the water.

I wrote a little about The Ship of Brides when I finished reading and that was apparently enough to convince at least a few people to read the book. Maybe I should stick to two-line reviews? Nah.

The Ship of Brides is is a story based on an actual event. After WWII ended, 600 Australian WWII brides took a 6-week journey on an aircraft carrier to Great Britain to meet their husbands and begin their new lives. The story focuses on a set of brides who ended up living as roommates in the aircraft carrier, although you also get a broader perspective of the entire ship's population, as well as an understanding of the captain's frustrations and the thoughts of a marine whose wife found new love and desires a divorce from him so she can remarry and take the children along to the United States.

I could honestly go on all day about how wonderful this book was. The character development, the situations, the dialogue -- both that of the men and women on board -- the many interactions, friendships and even horrors were all utterly believable. There are endings both good and bad for brides on the ship, some of whom receive telegrams saying they're no longer wanted. The captain has his own challenges in a festering wound that he can't have treated because the replacement doctor is useless. He also must deal with the letdown of being forced into retirement.

What I loved most was the complete satisfaction felt upon the book's ending, which is utterly romantic for several of the characters, heartbreaking for others. The ending is absolutely perfect.

The Ship of Brides by Jojo Moyes is definitely going to end up one of my favorite reads in 2010. I was swept away; I laughed, I cried. Lovely, believable writing and deft characterization with a tremendous amount of both internal and external conflict make The Ship of Brides a perfect read, in my humble opinion.

And, now the F2F report!

Many, many people asked me to share what my first experience with my new Face-to-Face book group was like. First, I should tell you the group read two books: Loving Frank by Nancy Horan and The Women by T. C. Boyle. I managed to check out Loving Frank from my library but didn't locate a copy of The Women. Both are about Frank Lloyd Wright's passion for women and his affairs, although Loving Frank focuses on Mamah, whom many consider the love of his life.

I didn't finish reading Loving Frank and actually had to return it to the library because there was a hold on it, but I knew about the shocking ending (which I won't spoil for those who haven't read it) and the members of the group described a portion as quite graphic and violent, so I'm perfectly happy with not having completed the reading of the book. Our leader encourages members to attend, whether or not they've managed to read a word.

So, what was the group like? They were a hoot! I have never sat with a group of women (and one man -- another fellow was unable to come, so it's not an all-female group) who are so passionate about books. They are noisy and fun, completely willing to accept each other's opinions, diverse as they are. In fact, they get so excited that they just holler right over each other. One woman said she thought Wright was, quite simply, "an S.O.B." and couldn't be convinced to view him otherwise. Almost all had viewed some of Wright's homes and one woman said, "He's gone down a notch in my mind. It'll be hard to look at his homes from the same perspective." Our fearless leader said, "I admire him," and sat quietly smiling.

What a blast!! And, even more fascinating . . . the home in which we met was designed by "a contemporary of Frank Lloyd Wright," and a man who was associated with Wright in some capacity. I believe the builder studied under Wright, but don't quote me on that. It was designed with the same long, low perspective -- a flat roof, sprawling rooms with high ceilings, the wondrous sense of spaces opening into spaces, and lots of windows placed to let in as much light as possible. The outdoor-indoor concept was evident and the sound of water bubbling in the background was soothing, although one member said, "It makes me want to pee."

Readers, your mouths would have dropped at the sight of the gorgeous floor-to-ceiling built-in shelves in more than one room. If I can talk our leader into letting me take a few photos, in the future, I will. But not till I've been around the group a while and gotten to know everyone. I'm really looking forward to our next meeting, which I'm told will be a relaxed Christmas affair at fireside with eggnog and "spiked and unspiked punch". Woot!

Just walked in, this week:

+2 books from the library sale

My goal is to get rid of 10 books for every 1 that comes in. It's going to take a lot more work to get to that point, but I currently have quite an interesting line of stacks to sort through, in my hallway. Wish me strength.

Up next will be my review of Desiree by Annemarie Selinko and I'll attempt to pre-post some reviews before I take off a few days for Thanksgiving holiday. Kiddo is home!! So happy to have him around for a week!

Would you like to read future updates about my F2F group?