The Puzzle King by Betsy Carter 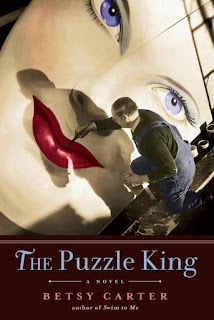 On a gray morning in 1936, Flora Phelps stands in line at the American consulate in Stuttgart, Germany [where she will use her feminine wiles in a daring attempt to rescue her family from Hitler's terrifying regime].

This is the story of unlikely heroes, the lively, beautiful Flora and her husband, the brooding, studious Simon, two Jewish immigrants who were each sent to America by their families to find better lives. An improbable match, they meet in New York City and fall in love. Simon—inventor of the jigsaw puzzle—eventually makes his fortune. Now wealthy, but still outsiders, Flora and Simon [are concerned about] the loved ones they left behind in Europe whose fates are determined by growing anti-Semitism on both sides of the Atlantic.

Inspired by her family’s legends, Betsy Carter weaves a memorable tale; she explores a fascinating moment in history and creates a cast of characters who endure with dignity, grace, and hope for the future.

The Puzzle King begins with the prologue mentioned above--Flora's trip to the consulate-- which gives readers a hint of the heroic "rescue" mentioned in the cover blurb, but without any context. The vast majority of the book is the context, beginning with young Simon's early life in Lithuania and his arrival in New York City in 1892.

Simon's father has been dead since he was 3 years old and his family in Vilna is large, poor and Jewish in an anti-Semitic land. His mother has sent him to America alone, with no resources and at an age too tender to even comprehend where he is to go. But, Simon manages to find a home and his prodigious artistic talent helps him to find decent work at a fairly young age. Simon is quiet and solemn, not particularly good-looking but a hard worker and talented.

Flora and her sister Seema have been sent to America from Germany. Seema is a bit of a lost soul who seeks comfort in the arms of wealthy men while Flora is happy and ebullient, a beautiful and charming girl who doesn't really mind the fact that her tall, gorgeous sister is the one who turns heads. When Flora and Simon meet at a dance and Simon slips Flora a drawing, their love is sealed. They seem like a completely incompatible couple but they are passionate in their mutual adoration.

Somewhere along the way, Simon has lost touch with his family in Lithuania and his inability to find them drives him to stay abreast of the growing unrest and anti-Semitism in Europe. Flora's mother and another sister have remained in Germany and they are Jewish, as well. While Simon becomes wealthy from his creation of the cardboard jigsaw puzzle, he also quietly makes plans to save lives.

There's much, much more to the book. It's quite a detailed exploration into the lives of Flora, her sister Seema and Simon. But, it's not until the end of The Puzzle King that the author gets around to describing the "heroic rescue" and Flora's role. Once you get to that point, the story is incredibly, deeply touching. I'm an emotional chick, but there really are very few books that I have to close until I can focus to continue reading after wiping the tears away. The Puzzle King was one of them. I don't want to give away any important details, so let's move on to . . .

What I loved about The Puzzle King:

The Puzzle King is an engrossing story of separation, longing, love, heroism and passion that I found almost impossible to put down. Some of the characters are very unlikable, some are good, kind people. All are so beautifully described that I can still visualize them as if they stepped out of the pages as I read. The author's description of the real family story, both the legend she was told and the facts she discovered in her research, round out the book and make it all the more fascinating and moving.

I was a little baffled by some of the changes the author made from reality to fiction and I truly believe it would have been a better book if the author had incorporated more of the true story, simply because some of the changes gave the book a sadder tone that wasn't necessary given the reality. However, I do understand why she made those changes. They would have made the writing much more difficult because there would have been more characters to describe.

Excellent writing, vivid characterization and a deeply touching tale of heroism based on a true story make The Puzzle King a mesmerizing read, although a slightly somber tone detracted marginally from its overall beauty and enjoyment level. If I were to rate it numerically, I'd give the book a 4/5. I don't do that, though. Okay, yeah, I do rate books at Goodreads. But, only because I feel obligated.

Many thanks to Algonquin books for my copy of The Puzzle King. My copy has already been claimed by Christina in Jackson, who told me she wants to own books and be surrounded by them, not just read them. And, yes, she'd be happy to take my copy of The Puzzle King, which I happened to have in my hands when she made that comment. Christina's going to get a little bag of wish fulfillment.

I've gotten a few books in the past week but I'm not sure what on earth I did with them. I'll write about books that have walked in, as soon as I locate them. It's been a busy week, although I wouldn't classify this week as a productive one, thus far.

We got the kitties a mechanical litterbox that scoops itself clean about 5 minutes after being used and it sounds just like the paper shredder. I'm getting used to the noise, but I still find myself double-checking to make sure the shredder is unplugged and kitties are intact.

Other bits of life:

I've just begun physical therapy on my neck, for migraine prevention. Wow, does that hurt, but I don't have a headache today. I have a neck injury from college and you could have knocked me over with a feather (if I hadn't already been horizontal) when the physical therapist said, "And, there's your accident," as he poked the place I hurt my neck. Right on the money. Cool. Driving back and forth to regular appointments is really eating my time, but it's better than being paralyzed by migraines.

No, really. I mean it. I'm off to do laundry and read. Exciting, no?

©2010 Nancy Horner. All rights reserved. If you are reading this post at a site other than Bookfoolery and Babble, you are reading a stolen feed. Email bookfoolery@gmail.com for written permission to reproduce text or photos.
Posted by Bookfool at 12:11 PM