Another mini-review! I feel like my recent posts have been too lengthy and some of those books have been lingering in my sidebar too long, so I'm going to attempt to work on brevity. 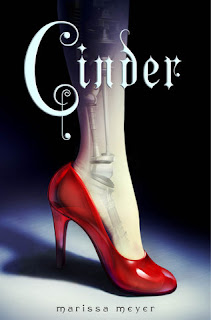 Cinder by Marissa Meyer was an impulse purchase based on a whole lot of blogger buzz -- fortunately, one I don't regret. Cinder is a futuristic retelling of Cinderella in which the heroine is restyled as a cyborg (part human, part mechanical due to serious injuries sustained early in her life) who works as a mechanic at a stall somewhere in a new-world China. In this futuristic world, Earth is fighting a devastating plague and there is a serious threat of war from a colony on the moon.
I whipped through Cinder and have to admit I was stunned by the excellence of Meyer's world-building, characterization, slow unraveling of clues (I did figure out one important facet of the plot, early on, but it didn't change how I felt about the book) and the way the author concluded the book in a satisfying manner, in spite of the fact that it is the first in a series.
Addendum: A commenter has reminded me that Cinder does have a cliffhanger ending. I think I may have forgotten that because I was forewarned by a friend who read it. Being prepared can help, but I do recall thinking enough of the story was wrapped up to satisfy me.
Highly recommended to lovers of Young Adult novels. The futuristic setting is believable but it did take me a while to adjust to the idea of Cinderella's story taking place in Asia of the future. I liked Cinder enough to save my copy for a reread and doubt I'll forget the book before the second in the series is released.
©2012 Nancy Horner. All rights reserved. If you are reading this post at a site other than Bookfoolery and Babble or its RSS feed, you are reading a stolen feed. Email bookfoolery@gmail.com for written permission to reproduce text or photos.
Posted by Bookfool at 12:18 PM