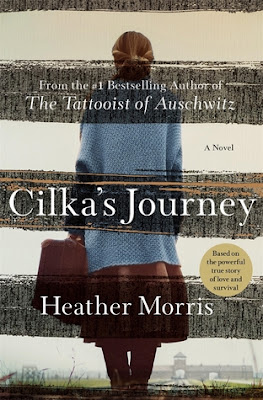 Cilka's Journey was my most-antipicated fall release and it did not disappoint. A little background: my book group read The Tattooist of Auschwitz and discussed it, a couple months ago. During the discussion, someone brought up Cilka and one of the women in the group called her "the prostitute". I argued that she was not a prostitute but a rape victim. Had she said "no" to sleeping with a Nazi who cornered her at the concentration camp, she likely would have been either beaten mercilessly (and raped, anyway) or put to death. She chose to stay alive and didn't fight but it was still rape because it certainly wasn't something Cilka wanted. The response amongst the group was mixed. I left the meeting feeling frustrated.

So, I was thrilled when I found out there was a new release coming soon that revealed what happened to Cilka. At the end of The Tattooist of Auschwitz, you find out Cilka was accused of being a collaborator and a spy because she slept with Nazis in the concentration camp and spoke several different languages.

Cilka's Journey begins with her release from a death camp (I think she was in Birkenau, at that point), after which she was immediately sent to another prison and then onward to Gulag Vorkuta, above the Arctic Circle. There, she was to be imprisoned for 15 years. Cilka's Journey is a novelized account of her time in the gulag, the friendships and dangers, the work she managed to acquire, and how she fell in love and was eventually released. There are flashbacks to Cilka's time in the concentration camps that help fill in the story of what happened to her while she was there, beyond what you learn of her in The Tattooist of Auschwitz.

There's also some additional material to fill out the facts of what life was like for women in gulags, at the end of the book. I appreciated that. While Cilka was a real character and much of what is in the book happened to her, Cilka's Journey is a fictional work based on facts (the author goes out of her way to make that clear) and things like the friends Cilka made in the gulag are creations by the author. But, she made it clear that Cilka was not a prostitute, as she was accused of being, but a prisoner whose life was always, always in danger and submitting to rape was one of many things she had to do to survive.

Highly recommended - A difficult but very satisfying read, especially if you were already curious about Cilka and what became of her. If you haven't read The Tattooist of Auschwitz, that's OK. Cilka's Journey stands alone fine, although I also recommend The Tattooist and I suspect the reading of Cilka's Journey is much more fulfilling if you have gotten to know her, already.

Many thanks to St. Martin's Press for the Advance Reader Copy!!