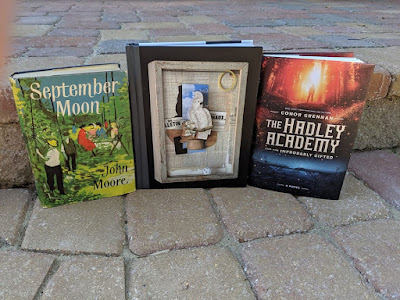 
All of these were purchases. September Moon is a book that an Instagrammer I follow reads annually and the excerpt she posted was so beautiful that I would have joined along if I had a copy. Unfortunately, I had to order one from England, via Abe Books, so it didn't arrive till September was over. I may not save it till next September, it sounded so good. Isn't it gorgeous? Birds of a Feather is the book I was thinking about breaking my Amazon book-buying ban for and clearly I decided to go for it. It's about a series of box constructions by Joseph Cornell, all of which were done as an homage to Juan Gris, an artist Cornell admired. The book accompanied an exhibit of Cornell's boxes and the paintings and collages that inspired them. The Hadley Academy for the Improbably Gifted is a book I pre-ordered months ago, so it was a surprise to open the box with Birds of a Feather and find a second book inside.


I actually read the first three books (all children's books from Sterling) the moment they walked in the door but forgot to add them to last week's list. I hope to get those reviewed this week. The Summary of the Mueller Report was great, although reading about our president's terrible temper and the laws and norms he routinely breaks, all over again, was painful. Hope to get to that, this week, also. I may move Fiona Friday to Saturday to make sure I can fit everything in, although the three children's books will probably be reviewed in a single day, as usual. I like doing a Children's Day. The Cats of Tanglewood Forest is a book I picked up when nothing else was holding me. I just needed a change of pace. It worked; I was afraid I was about to fall into a reading slump but The Cats of Tanglewood Forest saved me.


Where the Angels Lived is nonfiction, about the author's search for information about a family member who died in Mauthausen concentration camp but whom her family had never mentioned. She moved to Hungary for 5 months to research his life and teach. It's this month's F2F discussion book and I hope I make it to discussion but it seems unlikely because we're getting close to Kiddo's wedding and we're helping with the planning. It's getting down to crunch time and there's still a lot to be done.

Last week was just a forgetful week, I guess. I'm still watching the same programs: Glitch, NCIS, Chicago Fire, Poldark, The Durrells in Corfu. But, I forgot to mention that it's also Hallmark Channel movie season, at least for me. Husband and I watched two Hallmark movies, last week, and one this week. 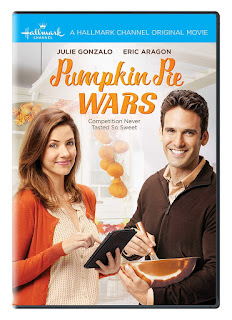 Pumpkin Pie Wars surprised us both. While the male lead was a little stiff, the storyline was not so trite as the usual Hallmark script. It was cute, the story of the children of two women who have competing bakeries taking their places in the annual pumpkin pie baking competition. Both parents of both of the main characters were still alive! We're so accustomed to a "sad because of dead parent" line running through most of the Hallmark movies that my husband actually said, "This isn't a real Hallmark movie! Nobody's dead!" Haha, it's true. It was a very different story and we both loved it. There really wasn't a dark moment, either, although there was one brief moment that something went wrong for such a short time that it didn't even count. It went "dark throwaway line; all resolved".

I like it when the Hallmark movies don't fit into the normal pattern and the story was charming, so Pumpkin Pie Wars is definitely a new favorite. 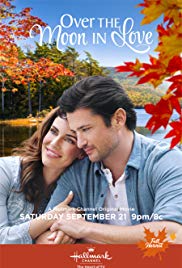 Over the Moon in Love is a more typical Hallmark story and parts of it stressed me out but I still loved it. The heroine, Brooklyn, has had a natural talent for matchmaking all her life and turned it into a successful business. Now, she's trying to get a spot in a magazine that will help her take it to the next level. Meanwhile, a man she used to hang out with from childhood, Devin, has returned to town and there's still a spark between them but Brooklyn's never known quite how to use her matchmaking skill on herself.

The daughter of the man who will decide which business to feature in the national magazine has come to check out Over the Moon in Love (the name of the business), one of several businesses competing for the coveted article slot. But, then she sees Devin, who is really still in love with Brooklyn, and asks Brooklyn to set her up with him. It goes badly till she talks Brooklyn into helping her figure out how to attract Devin and then it goes too well. Will Devin end up with the wrong woman?

Loved this one, too. And, then I watched another Hallmark movie (which I apparently saw part of, last year, but it wasn't memorable), last night. It was terrible but I watched the whole thing, anyway. It had all of the usual hooks, two giggly female leads who were frankly annoying, the usual dead people on each side. The dark moment wasn't all that dark and lasted a hot second. I just didn't think the actors had any particular chemistry. But, I love the happily-ever-after, so I stuck it out.

©2019 Nancy Horner. All rights reserved. If you are reading this post at a site other than Bookfoolery or its RSS feed, you are reading a stolen feed. Email bookfoolery@gmail.com for written permission to reproduce text or photos.
Posted by Bookfool at 7:00 AM