Summary of The Mueller Report, Abridged and Introduced by Thomas E. Patterson 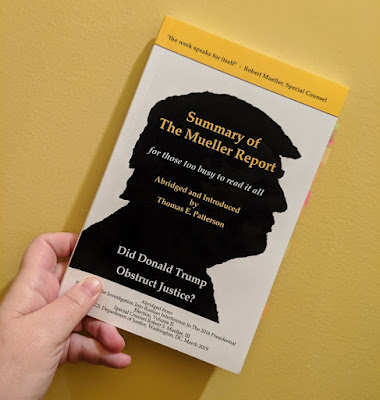 Corruptly. The word "corruptly" provides the intent element for obstruction of justice and means acting "knowingly and dishonestly" or "with an improper motive." The requisite showing is made when a person acted with an intent to obtain an "improper advantage for [him]self or someone else, inconsistent with official duty and the rights of others."

[...] the evidence does indicate that a thorough FBI investigation would uncover facts about the campaign and the President personally that the President could have understood to be crimes or that would give rise to personal and political concerns.

During the summer of 2016, Cohen recalled that candidate Trump publicly claimed that he had nothing to do with Russia and then shortly afterwards privately checked with Cohen about the status of the Trump Tower Moscow project, which Cohen found "interesting." [...] Cohen said that at no time during the campaign did Trump tell him not to pursue the project or that the project should be abandoned.

Our investigation found multiple acts by the President that were capable of exerting undue influence over law enforcement investigations, including the Russian-interference and obstruction investigations. The incidents were often carried out through one-on-one meetings in which the President sought to use his official power outside of usual channels. These actions ranged from efforts to remove the Special Counsel and to reverse the effect of the Attorney General's recusal; to the attempted use of official power to limit the scope of the investigation; to direct and indirect contacts with witnesses with the potential to influence their testimony. Viewing the acts collectively can help to illuminate their significance. For example, the President's direction to McGahn to have the Special Counsel removed was followed almost immediately by his direction to Lewandowski to tell the Attorney General to limit the scope of the Russia investigation to prospective election-interference only — a temporal connection that suggests that both acts were taken with a related purpose with respect to the investigation.

Please note that this is an abridgment of Volume II of The Mueller Report, the part about obstruction of justice. There are 10 or 11 specific charges of potential obstruction noted. The first volume describes Russian interference, which is eye-popping, so I still recommend reading the full report if you can find the time and strength. If you can't, Summary of the Mueller Report is great for getting a good look at what the president did to:

A. Try to stop the Special Counsel's investigation;
B. Try to limit the investigation to future election interference;
C. Try to get various people to do jobs they shouldn't, deliver uncomfortable messages, lie, fire people, and even break the law;
D. Try to not-so-subtly convince people not to "flip" and work with the government when they were caught lying,

The Summary of the Mueller Report surprised me. Having read the full report (both volumes), I'd already been through the material. What this book does for you is make the report more readable. Instead of having to read around the redactions and look back and forth between the text and the footnotes to get a full picture of what's in the report, this abridgment consolidates the information and makes it flow. During the reading of the complete version of The Mueller Report, I clearly became weary of the back and forth and having to figure out what was being said when there were redactions, often in mid-sentence, and missed a few things. So, there were times during the reading of Summary of The Mueller Report that I found myself thinking, "Huh, I don't remember reading this." It was probably because the full report occasionally made me weary and I'd lose my focus.

Recommended - The benefit of this abridgment of Volume II of The Mueller Report is flow. There are no footnotes at all and very few redactions. I appreciated Summary of The Mueller Report for the continuity and ease. Because it's an abridgment rather than a summary, there's still some legalese that can be a little difficult to understand if you haven't experienced legal writing, but if you're unwilling or unable to read the full report, it's worth that slight/occasional challenge to understand how the Special Counsel's team evaluated any known obstructive acts by the president, looked for a "nexus" or connection to determine whether his action had potential to do actual damage and then established whether or not there was intent. It also gives Americans a clear understanding of their current president's erratic temperament and inability or unwillingness to abide by laws and norms, which is distressing but important for citizens to understand.


©2019 Nancy Horner. All rights reserved. If you are reading this post at a site other than Bookfoolery or its RSS feed, you are reading a stolen feed. Email bookfoolery@gmail.com for written permission to reproduce text or photos.
Posted by Bookfool at 4:56 PM