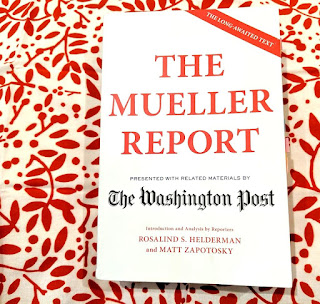 Reminder: For consistency's sake, I'm finishing up The Mueller Report, today, and Fiona Friday will be moved to Saturday. I kept the spelling, sentence structure, punctuation, and capitalization from the book, whether or not I thought it was technically correct.


From description of the 37-page indictment US v. Internet Research Agency et al.

The social media plot was hatched in 2014, before most Americans had begun to think about the presidential election. According to the indictment, by the spring of 2016, these Russians had decided they would support Trump and work to damage Clinton.

The Indictment was remarkable in its specificity, revealing that investigators had access to the group's internal communications, including an email from September 2017 in which one charged employee of the company wrote to a family member, "The FBI busted our work (not a joke)." The special counsel also alleged that these Russians worked off-line as well, asserting that three of those charged visited ten states to gather intelligence about US politics.

The group had online conversations with Americans, who became unwitting pawns, the special counsel alleged. The Russians persuaded Americans to hold rallies in support of Trump and paid for costumes and other materials so rallies could feature Americans dressed as Clinton in a prison jumpsuit.


The following quotes are from the indictment itself:


By in or around May 2014, the ORGANIZATION's strategy included interfering with the 2016 U.S. presidential election, with the stated goal of "spread[ing] distrust towards the candidates and the political system in general."


To hide their Russian identities and ORGANIZATION affiliation, Defendants and their co-conspirators — particularly POLOZOV and the ORGANIZATION's IT department — purchased space on computer servers located inside the United States in order to set up virtual private networks ("VPNs"). Defendants and their co-conspirators connected from Russia to the U.S.-based infrastructure by way of these VPNs and conducted activity inside the United States — including accessing online social media accounts, opening new accounts, and communicating with real U.S. persons — while masking the Russian origin and control of the activity.

Defendants and their co-conspirators also registered and controlled hundreds of web-based email accounts hosted by U.S. email providers under false names so as to appear to be U.S. persons and groups.

I don't want to go on copying this text for so long it puts everyone to sleep but the indictment goes on to say that the Russians stole U.S. identities, including social security numbers and dates of birth, which they used to create fake driver's licenses, open accounts at PayPal, and then use these as avenues for purchasing ads on social media sites.


The next quote is random as it comes from the transcript of Michael Cohen's sentencing hearing (just above this quote is information about Cohen's tax evasion) in 2018, but I think it's worth mentioning in the context of a president who refuses to reveal his tax forms and who has also bragged about being so smart that he doesn't have to pay taxes.

As Justice Oliver Wendell Holmes famously said, "Taxes are the price we pay for a civilized society."


Last quote! The following is from the indictment of Roger Stone:

On or about August 2, 2016, Person 1 emailed STONE. Person 1 wrote that he was currently in Europe and planned to return in or around mid-August. Person 1 stated in part, "Word is friend in embassy plans 2 more dumps. One shortly after I'm back. 2nd in Oct. Impact planned to be very damaging." The phrase "friend in embassy" referred to the head of Organization 1. Person 1 added in the same email, "Time to let more than [the Clinton Campaign chairman] to be exposed as in bed w enemy if they are not ready to drop HRC. That appears to be the game hackers are now about. Would not hurt to start suggesting HRC old, memory bad, has stroke — neither he nor she well. I expect that much of next dump focus, setting stage for Foundation debacle.


Highly recommended - Please read this! The bottom line is that while it's a little exhausting because of the legalese, the redactions (some of which, I heard last night, may now have been challenged as unnecessary) and the footnotes, as well as the descriptions of the president's screaming rages, violation of laws and norms, and refusal to listen to advice, The Mueller Report is incredibly important for Americans to read. The Washington Post edition includes a lot of extras that round out the report itself — a 50-page introductory portion, Michael Cohen's sentencing hearing, Roger Stone's indictment, and more. They give context to what was happening on the Trump Campaign, the sheer quantity of contacts between Trump's people and the Russians, the depths to which the Trump Campaign and the Russians sank to tear down a candidate the Russian government knew would keep them from thriving as long as they remained aggressive (invading Ukraine, backing Assad), hostile to the Western World (Putin scoffs at democracy), and in serious violation of human rights. Yes, they were terrified of Clinton and their fear is on clear display in The Mueller Report.

After three years of gaslighting, lies, and distractions, a lot of Americans either are convinced Russia had nothing to do with election interference or don't know what to think. Many of us are also totally unaware of just how deep the obstruction ran (including destruction of documents and communications by the Trump team) and the fact that Wikileaks ceased to be an organization committed to exposing government wrongs and became a Russian asset, years ago. Now, we're being told Ukraine, whose people desire to be a democracy but have been fighting corruption and invasion for years, was the country that interfered in our election, not Russia. That's yet another attempt at gaslighting and one that I'm afraid some of my friends have already bought into. It may take time to read and you might have to take breaks, like I did, (I spread out the reading over months, literally) but if you're an American, you really should read The Mueller Report. I highly recommend The Washington Post edition because of the added material.

©2019 Nancy Horner. All rights reserved. If you are reading this post at a site other than Bookfoolery or its RSS feed, you are reading a stolen feed. Email bookfoolery@gmail.com for written permission to reproduce text or photos.
Posted by Bookfool at 12:31 PM