The House on Tradd Street by Karen White - #3 for RIPXIV 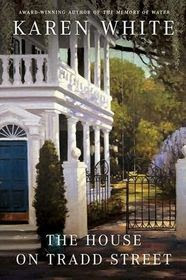 I read The House on Tradd Street by Karen White both for the RIP Challenge (ghosts!) and because there's a new Tradd Street book coming out (it's on my October TBR stack). The House on Tradd Street was published in 2008 and has been sitting on a pile of books in my library for a couple years, and the series has chugged on, since then. I'm pretty sure I got my battered copy from Paperback Swap, a few years after it came out. It was one that I packed up and moved from the old house.

The House on Tradd Street is about a real estate agent named Melanie Middleton, in Charleston, South Carolina, who sees ghosts. When she goes to a house in the historic district to talk to the owner, Nevin Vanderhorst, thinking he's about to offer her the listing as he prepares to go into a residential facility, she sees a woman in old-fashioned clothing standing behind a swing. Reluctantly, she admits that she saw the ghost of his mother, after Nevin asks. That night, he dies and leaves the house to her in his will. But, there are conditions. She must stay in the house while it's being restored, try to unravel the mystery of his mother's disappearance when he was a child, and after a year the house will become hers.

There are many ghosts in the Tradd Street house. One is a dark presence that has a tendency to shove people. The rest are harmless. But, they're trying to tell Melanie something. As she enlists the help of her friend Sophie, is aided by Jack, and must report her expenses to her father, there is quite an interesting cast of characters. When a relative of Longo's shows up looking to buy the house and he starts taking Melanie out, is a love triangle forming when Jack appears to be jealous? Who are the ghosts and what are they trying to say? Will Melanie figure everything out and help lay the spirits to rest or will the sinister spirit do too much damage and put an end to the restoration?

Recommended but not a favorite - The one thing I really, truly loved about The House on Tradd Street was the ghosts. I thought Karen White did a fabulous job of keeping the spirits close to available literature and other ghost stories so that it felt believable. In fact, I was really quite surprised to find that, after finding Heart-Shaped Box far-fetched enough that it didn't frighten me at all, Tradd Street seriously made my skin crawl and had the hairs on my neck standing, at times. It just felt real to me. I also liked the secondary romance. But, I found the heroine too prickly and didn't understand a few things about her. Why was she so rude to Jack? Why did she think of business dinners as dates? Why did she trust the man that everyone said was fishy and the dog even hated?

Fortunately, I do love a good ghost story and that kept me going. I occasionally felt lost amongst the clues, but I also enjoyed the mystery and the fact that the mystery deepened as the story progressed, keeping the pages turning. So, not being overly fond of the heroine certainly didn't ruin the book for me. And, in fact, she seemed to have laid her own ghosts to rest ("ghosts," in this case, meaning her childhood traumas) by the end of the story, which bodes well for her attitude in future stories. I'm looking forward to reading the new book, particularly for more creepy ghostly fun.

Since this is the first Tradd Street book I've read, I have no idea what's happened in the series as it's progressed but I don't have any problem with reading stories out of order if they're written to stand alone. Hopefully, the new one will stand alone well.

Silly book story: When I moved The House on Tradd Street to my bedside TBR, it became vulnerable to Cats Trying to Get Mom's Attention in the Morning. I don't know who is the guilty party (probably Fiona – she's terrible about chewing on paper) but one of the cats ripped a corner off the cover. I was able to salvage the corner and put it back on with carefully-placed clear packing tape. Whew! Grateful that clear packing tape is a thing!


©2019 Nancy Horner. All rights reserved. If you are reading this post at a site other than Bookfoolery or its RSS feed, you are reading a stolen feed. Email bookfoolery@gmail.com for written permission to reproduce text or photos.
Posted by Bookfool at 1:49 PM