The Size of the Truth by A. Smith, Raise High the Roof Beam, Carpenters by Salinger, Collage and Construction by H. Weiss

Well. This is a hodgepodge. I looked back over the list of books I've read and found that there are 4 I haven't reviewed. One is The Mueller Report, which I think I'll start quoting, next week (you should see the number of flags in that book). The rest are random and none are ARCs; all were purchased at some point, so there's no need to say much. 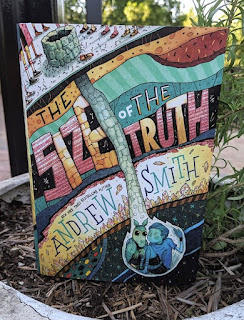 The Size of the Truth by Andrew Smith is a middle grade story about Sam, a boy who fell down a well when he was 4 years old and was so traumatized that he didn't speak for years. While he was in the well, he encountered a talking armadillo.

Now 11, Sam has been moved 2 grades ahead and is feeling traumatized all over again. Everyone is bigger, especially James, the boy Sam blames for his fall into the well. Sam's father wants him to go to the science and math magnet school and MIT but Sam wants to be a chef. Gym sucks and the teacher seems to hate him. Everyone is making him feel like he has no control over his life.

As the present-day story is told, the tale of Sam's time in the well with Bartleby, the talking armadillo, unfolds. Of course, the armadillo was all in his mind (or was it?) The Size of the Truth is a fun read and all the way through the book I was so convinced that the armadillo was real that I kept stopping myself to question how on earth it was that someone had managed to convince me a clearly-not-real character was, in fact, real and not a figment of the child's imagination.

I do recall having a bit of trouble with the fact that the 4-year-old knew so much, including how to swim. But, obviously Sam is a pretty sharp kid or he wouldn't have been bumped up 2 grades. I still had trouble swallowing his level of knowledge, although I shouldn't because I knew a little girl who was that far ahead of her age range at 5.

Recommended - Smart and entertaining with some terrific lessons. I particularly liked what Sam learned about James and how memories can be distorted. 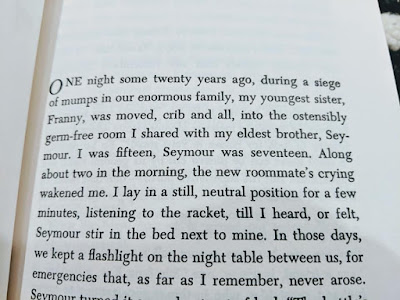 Raise High the Roof Beam, Carpenters and Seymour, an Introduction by J. D. Salinger is a book of two novellas (I think), which I read during a weekend readathon. I posted a couple photos of the book to Instagram but chose not to do any updating at the blog because I figured it would be too time-consuming and the whole idea was to read as much as possible, after all. There's something very real about Salinger's writing and the moment I read that opening paragraph, I was hooked. I loved "Raise High the Roof Beam, Carpenters". I love the Glass family and it was nice to revisit them.

"Seymour, an Introduction" was a bit more philosophical, much like Franny and Zooey but without the nice stretches of description in which the family is just being human, so I didn't care for the second story as much. The great thing about Salinger was his straightforward descriptive ability and characterization. The awful thing was that he was too smart for his own good. I find his philosophical meanderings exhausting. But, it was great to go back in time and learn a bit about Seymour, his love of poetry, and how he and his friend kept getting in trouble for going off to talk poetry when they were in the military. In general, I kind of adore Salinger.

I definitely recommend Salinger, in general, and particularly loved "Raise High the Roof Beam Carpenters", of the two stories. 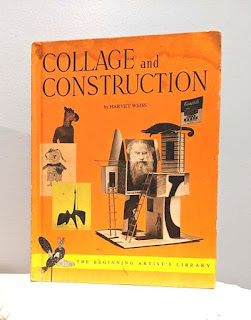 Collage and Construction by Harvey Weiss is an ugly old book that I bought in the library sale so long ago that I didn't even recall owning it. I came across the battered copy while I was going through books, trying to find some to donate. It's a children's book that describes the difference between collages and constructions, gives examples by the author and other artists (often with photos of museum pieces), and describes how to come up with a theme, the items needed to create them, and the actual process of creating or building.

I looked up Harvey Weiss, after I finished reading the book. He was an interesting man. He wrote quite a few how-to books and I wouldn't mind finding more of them to read but they were mostly published a long time ago, like this one (1970 is the copyright date). I also looked up some of the artists whose works were included and I'd like to read more and see more of one of those artists' works. I'm still not buying from Amazon but it's a book of one of the featured artists' work that I might break my boycott for . . . eventually.

At any rate, the book was fascinating and informative enough that I'd probably keep it if I didn't need to get rid of books and it didn't happen to be so grubby. Recommended, if you can find a copy.

©2019 Nancy Horner. All rights reserved. If you are reading this post at a site other than Bookfoolery or its RSS feed, you are reading a stolen feed. Email bookfoolery@gmail.com for written permission to reproduce text or photos.
Posted by Bookfool at 10:18 PM