Earth to Charlie by Justin Olson 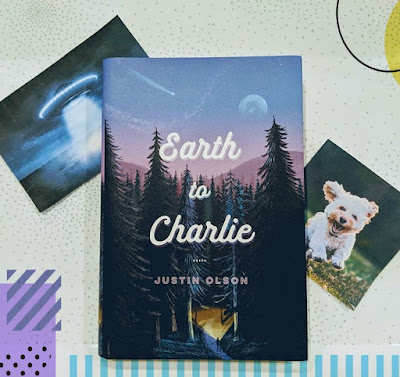 First things first: Earth to Charlie has a cover that makes it look like sci-fi (and the title probably makes one think that, as well) but it's a young adult novel about an outcast who has been waiting for aliens to take him away since the night his mother said she was about to be picked up by aliens and that they'd return to fetch Charlie, later . . . and then she disappeared.

On the night that the book opens, Charlie hears a loud noise and sees a bright light. He's convinced it's the alien spaceship that's returned for him. This seems odd when you discover that he's in high school and years have passed; but, he's still utterly convinced that his mother was taken by aliens and all his father does in response to Charlie's obsession with aliens and his mother's disappearance is drink heavily and make himself scarce. He's not there for Charlie and he hasn't ever told him what he thinks, apart from his mother's claim being nonsense.

At school, Charlie is mercilessly bullied. But, then a new guy named Seth arrives and he wants to be Charlie's friend. Charlie is hesitant. He's a pariah. Why would anyone actually want to be his friend? There are a lot of other things going on: Charlie's grandma is in a nursing home deteriorating from Alzheimer's and he's the only person who ever visits her; Charlie's dad is drinking too much and not present so that Charlie feels alone at home; Charlie's 600-pound neighbor ends up in the hospital and Charlie offers to dog-sit the dog he usually walks but his dad doesn't want a dog in the house.

Then, Charlie meets up with a woman who keeps track of alien sightings and there's a subtle shift. What really happened to Charlie's mother? Will Charlie ever manage to speak to that girl he has a crush on? Will his father ever stop drinking and become a real dad to Charlie?

Highly recommended - A lovely, moving story of finding your way on Earth. I closed Earth to Charlie with happy tears in my eyes. When author David Abrams (Fobbit; Brave Deeds) recommended Earth to Charlie, my eye was initially caught by that gorgeous cover. And, it does look like a sci-fi cover, but I looked up the description and thought it still sounded appealing, after initially being disappointed that it wasn't sci-fi.

I'm so glad I bought Earth to Charlie. At the time I read it (about two weeks ago), I was fighting a book slump and it drew me right in. I wanted to know what happened to Charlie's mother, whether there was more to his friendship with Seth than Seth wanted to admit (this part is handled beautifully), what would happen with Charlie's neighbor and the dog. I also loved the relationships between Charlie and his grandmother and his friendships with the neighbor, the nice nurse at the nursing home, and Seth. Charlie is a terrific character, a truly good guy.

I'm pretty sure this is Justin Olson's first published book. I can't wait to see what he comes up with next.


©2019 Nancy Horner. All rights reserved. If you are reading this post at a site other than Bookfoolery or its RSS feed, you are reading a stolen feed. Email bookfoolery@gmail.com for written permission to reproduce text or photos.
Posted by Bookfool at 11:36 AM

Email ThisBlogThis!Share to TwitterShare to FacebookShare to Pinterest
Labels: Justin Olson, LGBTQ, no aliens, Simon and Schuster Books for Young Readers, YA