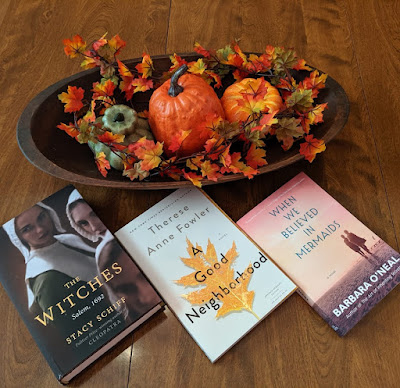 
The Witches was a library sale purchase, so it just cost me a quarter. A Good Neighbor is both a funny story and one of the most exciting arrivals of fall. I put it on my wish list as soon as I read about it and then after it went onto my wish list it showed up on Shelf Awareness, so of course I signed up to try to win a copy.

But, here's the funny part. Someone else brought the mail in on the day A Good Neighbor arrived, whenever that was. We recently cleaned out our kitchen island and whoever brought that mail in plunked it on the dining table, where it was hidden by all the dishes and cooking items we set aside to give away. I found it while cleaning off the table and packing up the donations, today. Husband proclaims innocence. Fortunately, there were no bills in that particular pile. I think it's only been a week or two but some of our bills come with due dates that don't give you a lot of turn-around time, so I am not a fan of misplaced mail. At any rate, I may have squealed when I opened the envelope.

When We Believed in Mermaids was purchased for a read-along but I don't think I'm going to be able to join in, after all. Still, I wouldn't have gone ahead and bought it if I wasn't interested in the story and I may try to squeeze it in very soon.


Ack! Just one book! But, it was a terrific read. I spent most of the week reading a short nonfiction book for my F2F group that I still haven't finished: Where the Angels Lived by Margaret McMullan. It's not a difficult read, but it's about the author's time in Hungary, digging up information about a relative who was killed in the Holocaust. Because I don't know much about Hungary, I've spent a lot of time looking up photos and further information on Hungarian squares, parks, buildings, statues, and details about various people mentioned. I would have loved it if the book had contained a photo section. There's a lot to look up. After 4 days of reading and missing the meeting, again, I decided I needed a break and none of the books with bookmarks in them appealed to me.

I let Earth to Charlie call to me. I've reviewed it at Goodreads, already, but since that cover is so appealing and the title hints at sci-fi, I should mention that it's not sci-fi but a YA about an outcast whose mother told him the aliens were coming to get her and they'd be back for him later, then she disappeared. I loved it.


I didn't read a single page from Birds of a Feather or The Contender (the Marlon Brando biography) so I may actually restart The Contender, soon. Birds of a Feather isn't one I'll need to restart. I misplaced Help the Witch by Tom Cox for a week and when I found it I decided to just save it for another time, so it's back on the TBR pile. I just started 25 Days 'Til Christmas, last night, and I already love it.

The Mueller Report - The Washington Post version (review in 4 parts):

I broke up my review of The Mueller Report into 4 parts because there were so many quotes I wanted to share. My commentary just elaborates to fill in the gaps a bit because of the sheer quantity of things I thought were worth mentioning. There are two parts to The Mueller Report, itself: the part in which the Special Counsel's team investigated Russian interference in the 2016 election and whether or not there was coordination between the Trump team and Russia (don't believe the president's attempt at yet another snow job – Russia interfered and Mueller has the receipts) and the part in which they investigated obstruction by the president. The Washington Post version has some added material that rounds it all out.

I'll review the Summary of the Mueller Report, this week. I still highly advise any and all Americans to read the report. Read a summary or abridgment, online or in book form, if you think the full report and other info is too much but there is so much misinformation being thrust our way on a daily basis that it's a must-read in some form.

I think I'm close to finishing the third season of Glitch on Netflix, although I follow Rodger Corser on Instagram and I think he said there will be a 4th season, yay. It's a bizarre show but I love it because you never know what kind of twist they're going to throw in next. Who is a good or bad guy? Who will live or die? Will more people come back to life? It's fun. I didn't have a lot of time so I think I only watched 2 or 3 episodes but I'm loving it. 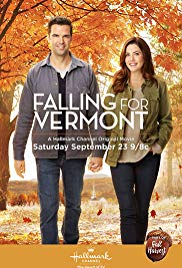 Falling for Vermont is the only Hallmark movie we watched, this week, and even Huzzybuns loved it. It's a 2017 movie about an author who is fed up with all the rushing around and public speaking (which she hates and fears) she has to do to promote her book series, which has now been made into a movie. She decides to take off for a few days in Vermont but has an automobile accident on the way and gets amnesia. The sheriff discovers her walking along the road and takes her to his small town.

It's autumn and there's a festival coming up so there's no place to stay. But the local doctor (a widower with an adorable child) offers to let her stay in his guest house. He figures he can also keep an eye on her because she has a head injury. She's disappeared for a couple days, before, so her boyfriend and publicist (or agent — not sure who the other person is) don't look for her and aren't particularly worried, at first, although they try to phone her repeatedly and it goes to voice mail.

Falling for Vermont is definitely a new favorite. It is a charming story with that touch of amnesia that I love. 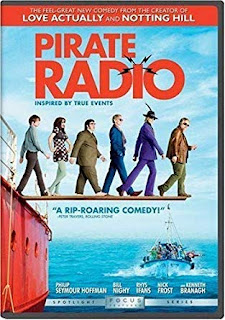 We also watched Pirate Radio and loved it. One of the best things about that movie is the all-star cast (mostly British actors of renown). I'd heard of the true story but didn't realize there was a movie about the pirate radio station on a ship. In fact, I had the dates all wrong. I thought it happened more recently, although I'm not sure why I thought that.

At any rate, the movie is "a little slow" in husband's opinion, but I thought it was great. I particularly loved the triumphant ending.


©2019 Nancy Horner. All rights reserved. If you are reading this post at a site other than Bookfoolery or its RSS feed, you are reading a stolen feed. Email bookfoolery@gmail.com for written permission to reproduce text or photos.
Posted by Bookfool at 7:00 AM