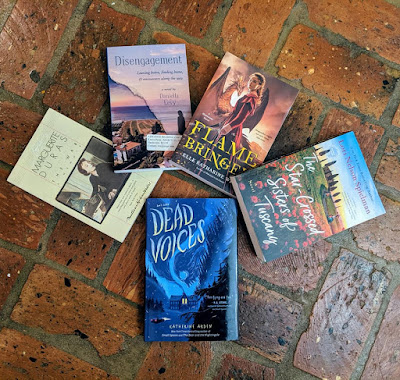 
OK, wow, not sure how I ended up with so many books, this week. Dead Voices is not meant for review but for a creative photo post and the title itself was a surprise; participants didn't choose the title they wanted but chose a type of candy and from there the book was selected by the publicist and sent (cool, eh?)  I've only done a creative photo promotion once before and I did review at the same time. I'll try to read Dead Voices ASAP so I can review either at the same time or shortly after because I don't generally promote books I haven't at least tried to read, although I do love posting creative photos.

Flame Bringer is a November release and the third in a series. I may have signed up for that one not realizing it was part of a series, so I'll read it and review out of order but if it's good I'll buy the first two, for sure. Kiddo and his new wife (!!!) are both avid readers of fantasy, so they may enjoy the series. And, I also have no idea how I got The Star-Crossed Sisters of Tuscany but doesn't it look marvelous? I love that cover. That and Disengagement are March/April releases, so I don't have to hurry up and read them before my break.


Yep, just the one. But, for once I don't feel bad about only managing to read a single book. We had guests coming and Huzzybuns (with plenty of help from his family on the wedding day and the mother of the bride contributing some dishes) catered the reception of Kiddo's wedding on Saturday night. So, there was a whirlwind of activity going on. We didn't manage to finish tidying the house but we got the most important rooms clean, so that's good. Where the Angels Lived was last week's F2F discussion book and with all that was going on I didn't finish it till a week after the discussion, although I'm definitely glad I read it.


I should finish 25 Days 'Til Christmas, today. I've set everything else aside, for now, and will decide what to restart or return to in about a week, when I've finished the last of my scheduled reading.

Kiddo and his beloved made it official on Saturday evening in the most colorful, festive, and yet spiritual and beautiful wedding ceremony I have ever attended. I have a new daughter-in-law! Woot! They had kind of a Medieval/Renaissance mash-up wedding and the reception hall was even set up with the bridal party's table perpendicular to that of the guests, so that it looked like the bridal party was seated at the high table, like royalty. A good portion of the guests chose to dress in Medieval or Renaissance clothing (it leaned Renaissance, but I was more Medieval peasant). And, here's something you'll love: many of the centerpieces at the reception had Harry Potter books in them, as the happy couple bonded over Harry Potter, D & D, their love of fantasy and sci-fi and Renaissance festivals. There were D & D dice in the boutonnieres. That was a surprise!

There were some hiccups with the catering because Huz had never done it before and there wasn't apparently a hospitality committee at the tiny church, but his family jumped in to help and because we're in the South, they actually had so many people offering to join in on the kitchen duties that they had to turn people away. Gotta love the natural hospitality of Southerners.

We had family hanging out at our house for 3 days and it was sooo fun. We had to lock the poor kitties in the bedroom. Fiona loves people but the noise level was even a bit too much for her, this time. She tried hanging out in the kitchen but she was looking a little terrified when I picked her up to move her to the master bedroom. Isabel, as always, went straight under the bed as soon as she heard strange voices. They're very happy about the quiet house, today, and currently snuggled up together on the reading chair. Snuggle season is open!

©2019 Nancy Horner. All rights reserved. If you are reading this post at a site other than Bookfoolery or its RSS feed, you are reading a stolen feed. Email bookfoolery@gmail.com for written permission to reproduce text or photos.
Posted by Bookfool at 1:48 PM