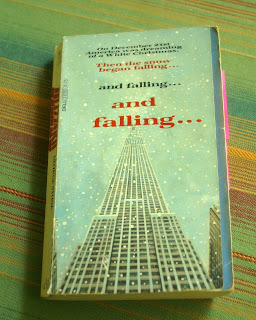 On May Day, a series of unusual events occur - Russian satellites cross a specific point from different directions. A fleet of Russian ships halt directly below the crossed paths, just off the Atlantic Coast of the United States.

By December 21, few Americans remember the significance of May Day or connect it to the blizzard beginning on the East Coast. Even fewer have any idea that a scientist working on a top-secret weather project has disappeared. What is going on? Is the storm real or man-made? Are the Russians responsible for the crippling blizzard burying buildings and stranding workers, killing Americans by the thousands?

This is the basis for Blizzard . . . an unprecedented storm, possibly man-made, wreaking havoc with no apparent end in sight (although, there are weather reports at the head of each chapter and every single one says it's supposed to clear up, which adds a touch of humor) and those fishy Russians hanging around, looking guilty. Suspenseful but intelligent disaster writing kept the pages turning. And, the ending?

I'm going to spoil it, so this is your last chance to turn back.

The ending was fascinating because it was so atypical, although it may have been common for the time. Rather than the usual "hero saves the day at the last moment" we've become accustomed to, the book has a sad ending. The unresponsive weather-effecting machines finally react, shutting down after an abyssal bathyscaphe is sent to the floor of the Atlantic Ocean to send a signal that can't be received from above, due to a malfunction. However, it's been theorized that a "Megastorm" could, if it continues long enough, cool the atmosphere enough to trigger a new Ice Age. And, in fact, it's too late - the new Ice Age has begun. In the end, the ceiling of the White House's West Wing collapses onto all the gathered officials, snow is beginning to fall unseasonably in France, and . . . basically it's the end of the line for humans.

I really enjoyed Blizzard. I was so sick of heat that reading about snow that wouldn't quit falling provided a great mental break. And, I liked the fact that the book wasn't as trite as it could have been; it was actually quite thoughtfully written, well-researched (or he did a good "snow job", hahaha), and with believable dialogue. Definitely a terrific book to save for 100+ temps. I wore my snowflake earrings most of the week, as well. Nutty, but true.

Having cooled off nicely, I warmed right back up when I jumped into reading about sweat and heat, people slapping at mosquitoes and the result of the heat, humidity and mosquito bites - the yellow fever outbreak of 1793 in Philadelphia.

Fever 1793 tells the story of the epidemic through the eyes of Mattie Cook, a 14-year-old who lives with her widowed mother and grandfather above her mother's coffee shop. During an unusually hot summer in Philadelphia, people begin to sicken and die. As disease spreads, panic ensues. Some - particularly the wealthy residents - flee the city. Others feel obligated to stay or become trapped. When Mattie's mother becomes ill, Mrs. Cook insists that Mattie and her grandfather go to a friend's farm. But, it soon becomes apparent that there's no escaping this horrible disease and Mattie must keep all her wits about her to survive in a city where people hide behind locked doors, the market and stores are shut down, and mass burials are held by necessity.

This is a harrowing fictionalized tale based on a true story. Yellow fever did kill thousands of Philadelphia residents in 1793. A few brave souls not only stayed but also helped those who sickened. Hysteria was rampant.

In a way, I could relate to this story because of our experience in a post-Katrina world where people fought over gas and stripped the shelves of food, although the circumstances were completely different. The city of Philadelphia virtually shut down, people began to run out of food, shuttered homes and stores were broken into . . . and nobody knew that yellow fever was all caused by those nasty little mosquitoes. It's a fascinating story and in Laurie Halse Anderson's hands, Fever 1793 is told brilliantly. Mattie is a character who has a sense of humor; sometimes she's even a little bit snarky, but when she's backed into a corner - and the author very skillfully throws her characters into corners, repeatedly - she's resourceful, clever, and determined.

I loved everything about this book - the characters, the well-researched historical setting, the fact that it wasn't entirely predictable. It's simply a very beautifully written book. Highly recommended.

Coming up . . . reviews of Monkey Love and Life on the Refrigerator Door. It would probably be a good idea to change out of my jammies before lunch time, though, so I'll take a break.

Did I tell you it rained? It rained, yesterday!!! Wahoo! It even dropped to the 80's, outside! Granted, it's a temporary thing, but we're receptive to any break in the weather, even if it only lasts a day. Kiddo had his first local swim meet on Wednesday and reached a new personal-best time in the 100-meter freestyle: less than a minute. And, last night was the annual "Red Carpet Bowl" football game, at which he performed. He's going to be one tired cookie, this weekend.

Okay, I'm dressed, now. Just thought you'd like to know. I'm still going to take a break to begin the laundry and possibly do a few other housewifey things. Later, gators.
Posted by Bookfool at 6:41 AM