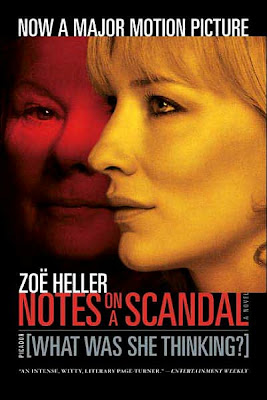 Notes on a Scandal: What Was She Thinking?
Zoe Heller
Published 2003
Picador Fiction
259 pages

You never appreciate what a compost your memory is until you start trying to smooth past events into a rational sequence.

The subtitle of Notes on a Scandal: What Was She Thinking? really describes the objective of the book - to attempt to unravel a thought process that is difficult, maybe even impossible, to fully comprehend. Rather than a suspenseful, edge-of-the-seat tale of scandal, the book is slow and contemplative; the whole idea revolving around that effort to crawl into the head of someone who committed an illegal act but somehow managed to justify it to herself, in order to figure out what on earth she was thinking.

Barbara is a loner, not particularly attractive but not ugly, either. Still, she's a very solitary person and it excites her when the beautiful new teacher at St. George's school, Sheba Hart, begins to reach out to Barbara and a friendship blossoms. Early in their friendship, Sheba poses a "hypothetical" question about the attraction of a young, male student by the name of Steven Connelly. Barbara tells Sheba very firmly to put a stop to Connelly's advances and report him to the headmaster. Sheba says she couldn't possibly have him punished for having a crush on her and says nothing further. But, later, it becomes obvious to Barbara that even at that time, Sheba was covering up the truth, possibly trying to get Barbara to help her justify her actions.

It is irritating when Sheba talks this way - as if she were a passive victim of fate, rather than the principal architect of her own suffering.

The reader knows, at the beginning of the book, that Sheba has been caught in a scandal, that her affair with a 15-year-old boy has been discovered and the press has exaggerated the story. The book is not only an examination of Sheba's reasoning, but also Barbara's attempt to logically order events, to explain how the affair came into being. That the press has distorted the issue in many ways is plainly stated. It's also obvious there will be no great, explosive ending. Sheba has been arrested and kicked out of her home; she'll undoubtedly go to jail and is too disconsolate to do anything dramatic in order to attempt to save herself. Notes on a Scandal is a quiet, pensive book that delves into the personalities involved. The narrator comes to her own conclusion, but the author still leaves room for her reader to decide for his or herself.

While there's nothing overwhelmingly exciting about the book, I'm pretty sure that it was intended to be a quiet, reflective book and - if that's the case - the author succeeded; the story is told with a skillful hand. There were times that I found I either strongly agreed or disagreed with a character in some way or another, but in spite of the fact that Barbara could be very opinionated, I never felt like the narrator was really preaching.

There was a tense silence for a moment or so, which was broken by Richard saying, “It’s difficult isn’t it, Barbara? One pretends that manners are the formalization of basic kindness and consideration, but a great deal of the time they’re simply aesthetics dressed up as moral principles, aren’t they?” . . .

I rather thought that he was a pretentious fool, but I kept that to myself.

3.5/5 - good writing, relevant story (this kind of affair has happened and created quite a sensation, in the U.S.) and an interesting approach but the pace is very slow and it's probably not for everyone.

Yesterday . . . I wore my snowflake earrings. They didn't cool me off, but thinking about them made me smile.

Today . . . The local newspaper says we are in the midst of "Heat Wave: Phase Two". I think that's how they put it. I'm too tired to go look. Hubby went to fetch kiddo from the pool and came home drenched. He suddenly understands why I was so completely wrecked, this weekend, and why I'm so upset that the school administration is not doing anything to keep the kids out of the worst of the heat.

Tomorrow . . . The heat index is supposed to hit 116 and there is a mandatory outdoor football/band event to "introduce" the football team. Like we care to send our kids out there just so they can name the football players. Call them #5 or #10; I'm fine with that. The event has not been canceled or postponed, due to heat. Morons.

I'm reading . . . Everyman by Philip Roth. I'm finding it rather dull, so far, but we'll see if that continues.

I've been piling up . . . creepy books, in preparation for the RIP Challenge.

Someday, I'll find the time to . . . post about recent awards I've been tagged for and actually read the latest RIP rules. I'm doing a lot of skimming, when I have a minute to sit and blog-hop. Apologies for not having time to do a Wahoo! post. Here's one wahooey photo, to make up for it - a dragonfly on a dead something in my front yard: 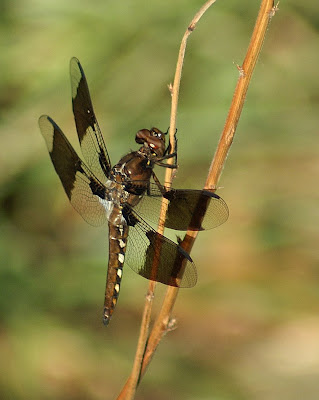 Hopefully, my life will normalize, sometime soon. We shall see. May many wahoos fill your life, today and always.
Posted by Bookfool at 12:47 PM