Everyman by Philip Roth, a photo tip, and an itchy lizard 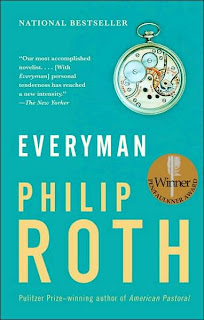 "You can weather anything," Phoebe was telling him, "even if the trust is violated, if it's owned up to. Then you become life partners in a different way, but it's still possible to remain partners. But lying - lying is cheap, contemptible control over the other person. It's watching the other person act on incomplete information - in other words, humiliating herself."

How he wished she could scald him in that lava now.

It wasn't till I finished the book Everyman that I realized I had no idea whether or not the protagonist had a name. Did he? Or was he "Everyman" in the sense of not even having a name, just an unnamed person, someone who could be any person you've known or avoided or loved, possibly ending in pain? I flipped back through the book and found no indication that I'd overlooked his moniker, but I can't be certain. It's hard to believe that didn't jump out at me.

To be honest, there isn't anything about the book that's particularly memorable or wonderful. Everyman is a book about aging, regret, loss, and loneliness.

Old age isn't a battle; old age is a massacre.

It's the story of one man who has made many mistakes and now - with his health failing him, about to enter the hospital for the 7th time in 7 years - confronts the reality that even if he has stayed young inside, he can never again repeat those same mistakes - chiefly, the error of not hanging onto the one, steady woman who truly cared. Now, nobody is interested in the gray-haired, wrinkled, declining old man who is left on his own and who has determined that the recreation he looked forward to for so many years hasn't fulfilled him at all in his retirement.

I know I saw a review of this book somewhere. Who else has recently read it? I can't find the review! I remember seeing the word "terrifying". While I didn't find it terrifying, there's no doubt that the trials of old age are clearly delineated: loss of health, decline in appearance, loneliness - especially for those who have made mistakes that generated rifts between the aged and their loved ones - difficulty finding a purpose or even a reason to keep going . . . horrors. Okay, maybe it is a bit terrifying. If the author had a purpose, I think it might be to say, "Stop, now. Evaluate your life and treat those you love with care, so that when your time comes you'll have fewer regrets." It's also possible that Roth meant to show how our scattered American families almost ensure isolation for the elderly.

But, it's pretty dull and definitely a total downer. I'll read more Philip Roth because I do think his writing has a comfortable flow. Everyman is the kind of book you can whip through in a few hours (assuming your head isn't pounding, which mine was). I wouldn't call it a "masterpiece" (as did Joseph O'Neill of The Atlantic Monthly, in one of the cover blurbs), but I think the author made some very astute observations about issues troubling the elderly and that he has a grasp of language that makes the book very readable. I'm going to put it on my "recommended" list because I don't think it's so awful that it's worth going out of your way to avoid, but be advised that the subject matter is pretty depressing.

Photo Tip of the Week:

Ignore the naysayers. By that, I mean that you should be willing to experiment and don't let people tell you not to bother trying to capture an image that grabs your interest. Here's my example - and, please bear in mind that this is not necessarily a fabulous photo, but one that tells the story: 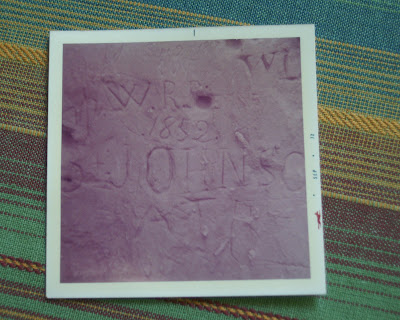 This is one of the first photos I took - snapped with my little Kodak Instamatic while on vacation. The back of the photo says, "Signiture Rock, Geurnsey, Wyoming". Obviously, I didn't know how to spell at the age of 9. Beyond that, the story behind this photo has always stuck with me. A brand new camera went with me on vacation in 1972. We drove to Wyoming and walked along deep crevices worn into the sandstone by wagon wheels during the massive movement of settlers to the American West, the so-called "Trail of Tears".

This particular "rock" (a former cliff?) was covered with inscriptions - names, initials, dates - and surrounded by a chain-link fence. I love history and so did my mother and father. We all walked around in awe, reading the inscriptions carved into the rock. And, then I decided to take a photo.

"That won't work," everyone said. "Don't bother. You won't be able to photograph that. The fence will get in the way."

Ignoring my entire family, I poked the lens through an opening in the fence and snapped - one photo and only one. When the picture came back, I was triumphant. It worked! Even my preternaturally optimistic father had discouraged me, but he raised his eyebrows and admitted that he was wrong when he told me not to try. The photo captured just a tiny bit of the rock, but it was enough to show how travelers carved their names and the date they passed through (some actually included the month and day - many, simply the year) into the sandstone.

There's obviously plenty of great advice worth listening to or reading, but that lesson has stuck with me. Never let anyone tell you not to bother trying. Even your mistakes can teach you something about photography, so go ahead . . . snap photos of things that interest you and ignore anyone who tells you not to try.

The RIP stack is growing. Just this afternoon, a book about haunted castles arrived in my mailbox. Wahoo! I hope to post a list of RIP Challenge books, soon.

I visited the library, early this week, to return some CDs and peruse the sale corner. While there, I found a book copyrighted in 1977 - a bit abused, but with the perfect theme for this week: Blizzard. Ha. I snatched that sucker up and I'm enjoying it immensely. What could be more fun than to read about a vicious snowstorm (blamed, of course, on the Soviets - everything was apparently their fault, in the 70's) when it's baking outside?

Oh, maybe sweating to take a photo of a tiny, itchy little lizard hatchling - another lousy photo, but he was down inside the monkey grass and it was so darned hot that I only stayed outside for a few minutes before deciding it was heat stroke vs. the perfect flaky lizard photo: 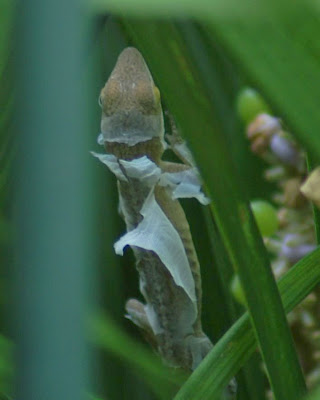 This must be a recently hatched lizard - even newer than the others I've photographed, because he was a mere 1" long in the body, not even 1/4" in width. He was itching like crazy, poor thing. When he was too far down in the monkey grass to even attempt to photograph, I still watched him scratching and nipping at the skin peeling off his back. What an utterly fascinating thing to observe.

Off to read. Wishing all of you a delightful weekend.

Bookfool
Posted by Bookfool at 2:51 PM