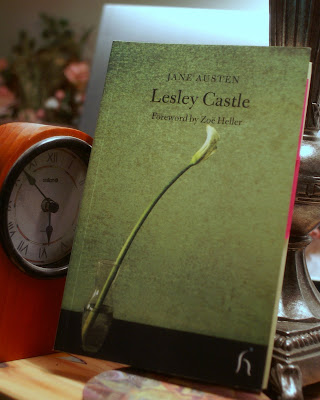 Lesley Castle by Jane Austen
Hesperus Press/Fiction
Copyright 2005
113 pages
Imagine how great the disappointment must be to me, when you consider that after having laboured both by night and by day in order to get the wedding dinner ready by the time appointed, after having roasted beef, broiled mutton, and stewed soup enough to last the new-married couple through the honeymoon, I had the mortification of finding that I had been roasting, broiling and stewing both the meat and myself to no purpose. Indeed, my dear friend, I never remember suffering any vexation equal to what I experienced on last Monday when my sister came running to me in the store room with her face as white as a whipped syllabub, and told me that Hervey had been thrown from his horse, had fractured his skull, and was pronounced by his surgeon to be in the most eminent danger.

'Good God!' said I, ' You don't say so? Why what in the name of heaven will become of all the victuals! We shall never be able to eat it while it is good. However, we'll call in the surgeon to help us. I shall be able to manage the sirloin myself, my mother will eat the soup, and you and the doctor must finish the rest.'

--from "Lesley Castle" by Jane Austen

Lesley Castle is one of those books that I found so amazing that I feel inadequate to describe it, but I'll do my best.

There are three entries in the book: first, the self-titled novella "Lesley Castle", followed by "A History of England" and, finally, another novella entitled "Catharine, or The Bower". All three works were written by Austen when she was a teenager. On the merits of her writing, alone, I'd say they're shockingly good for the writing of a teenager, but even more amazing is the fact that she already had a very mature understanding of social artifice. Zoe Heller calls the first story, 'Lesley Castle', "a rambunctious parody of the epistolary novel" which is "particularly striking" in its "melodramatic incident, regal vice and other immoral behaviour", all of which are presented "in a gleefully direct way". Gosh, I wish I'd written all that. Yeah, what Zoe said.

"Lesley Castle" is written as a series of letters and is . . . well, it's funny. All three stories showcase Austen's comic genius - I'm sure Zoe said that, first - but "Lesley Castle" was my favorite. Margaret Lesley rhapsodizes about how handsome she and her sister are in one flowery sentence, then goes on to describe how they are immune to their own charms. Charlotte Lutterell hears the devastating news that her sister's fiance has fallen off his horse and is not expected to live, and her greatest concern is what to do with all that food she's cooked for the wedding. The new Mrs. Lesley, married to the father of the two Lesley girls in the castle, arrives and is instantly horrified, as she relates to their mutual friend, Charlotte:

You can form no idea sufficiently hideous of its dungeon-like form. It is actually perched upon a rock to appearance so totally inaccessible that I expected to have been pulled up by a rope; and sincerely repented of having gratified my curiosity to behold my daughters at the expense of being obliged to enter their prison in so dangerous and ridiculous a manner.

Personally, I think the first novella makes the book worth the purchase price. But, the other two entries are also loads of fun.

"A History of England" is told as a series of brief biographical sketches of the monarchy (complete with illustrations), allegedly written to form the impression that it was written by someone who was . . . shall we say, not the sharpest knife in the drawer? Henry V's description is an excellent example:

This Prince, after he succeeded to the throne, grew quite reformed and amiable, forsaking all his dissipated companions and never thrashing Sir William again. During his reign, Lord Cobham was burnt alive, but I forget what for. His majesty then turned his thoughts to France, where he went and fought the famous Battle of Agincourt. He afterwards married the King's daughter Catherine, a very agreeable woman by Shakespeare's account. In spite of all this, however, he died, and was succeeded by his son Henry.

The narrator eventually shows herself to be an admirer of Mary Queen of Scots and tosses in a funny line indicating that only she and a few well-known historians have any real appreciation for poor Mary.

"Catharine, or The Bower" tells the story of a young lady whose two best friends are forced to leave their home after the death of their father, Mr. Wynne. Catharine is terribly let down after she anticipates the new neighbor her age becoming her friend, only to find the new arrival a major disappointment. Later on, when her new friend Camilla's brother shows up, Catharine somehow manages to convince herself that he's wildly in love with her, in spite of the fact that he admits to being completely disinterested. This is one of my favorite sentences, the description of how Mrs. Wynne got off lucky:

Mrs. Wynne was fortunately spared the knowledge and participation of their distress, by her release from a painful illness a few months before the death of her husband.

What a great way to describe missing out on poverty by dying first! And, here's a description of the flighty new neighbor Catharine finds disappointing as a substitute for her former best friends:

There had occasionally appeared a something like humour in Camilla which had inspired [Catharine] with hopes that she might at least have a natural genius, though not an improved one, but these sparklings of wit happened so seldom, and were so ill supported that she was at last convinced of their being merely accidental.

Now, how could you not love that? "Catharine" appears to stop abruptly without a real ending, but it still managed to be satisfying. I just gave it a mental ending of my own.

The book is immensely entertaining and, in spite of one abrupt ending and a good bit of historical silliness, I can't bear to take off even a fraction of a point:

Just finished, yesterday: Truth or Dare by Melanie Atkins - the book that set off that fascinating alien invasion dream. Honestly, I'm not quite sure how one zombie managed to trigger a dream about heartless aliens (who massacred the children, first), but I do understand that my subconscious latched onto the zombie characterization and turned it into a mannerism - the aliens walked much like zombies and that's how the renegade humans managed to walk amongst them and later fight back. It was like a little mini movie in Bookfool's brain. You should have been there. Anyway, I'll try to review Truth or Dare soon. Besides the zombie, the book has an interesting blend of ghosts, a witch, murder, voodoo, sex and a long-buried treasure. Gosh. Where did Melanie come up with that stuff?

The kiddo has us running all over the galaxy. First, the school drop-off at about 7:20 am. Then, of course, I have to sign him out in the afternoon because he doesn't yet have an athletics pass. After which, I must drop both kiddo and friend A. off at the pool - although the coach can't make it for at least another hour. So, we've got this: 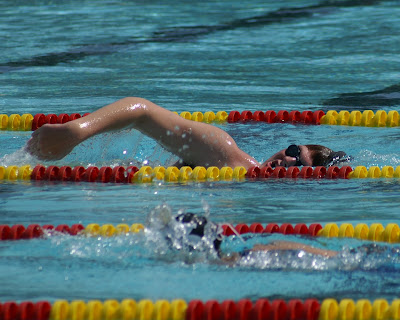 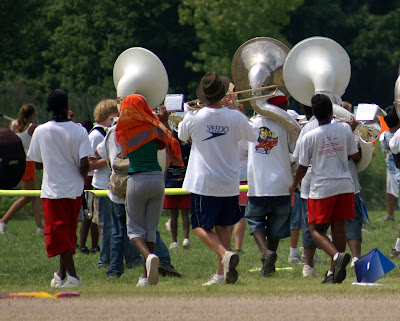 Now, don't go telling the band director, but the kiddo was seriously dawdling, today. He should have gotten dressed quickly so I could zip him right over to school for band practice. But, first he had fire ants on his shoes (great excuse - even if you don't get bitten, you can pretend and everyone empathizes with your pain), then he goofed around and talked to A., then he took forever getting dressed. Normally, I do some major verbal nudging, but it was 101 degrees outside. I didn't feel too great about having my kid march in 101 degree weather, so I just did the wishy-washy-sorta-nudge, instead.

Which leads to the bit about the ambulances . . . Hubby decided to give me a break and pick the kiddo up from band. When he got home, he asked if I ever experienced a band practice that ended up with two ambulances, two county deputy vehicles and a few other vehicles with flashing lights present, when a handful of the kids needed tending to for dehydration. Actually, yes, I did. But we did our marching practice at 6am, so we only had that problem at afternoon contests or last-minute extra practice sessions. Fortunately, my kid takes a cooler with a minimum of 3 bottled beverages. He just kept on marching. He's fried, though. I'm not happy about all this mid-afternoon stuff. My child slathers like crazy, but there isn't a sunscreen in the world that can handle that kind of abuse. He went back to the pool for swim club practice after band. I wish I still had that kind of stamina.

So, that's our day. Well, that and bill-paying, buying milk, and a few other exciting things you probably don't want to hear about. I'm ready to pop open one of those nifty lavender fizzies and go take a nice soak. Not sure about the kid, but he definitely deserves a good night's sleep.