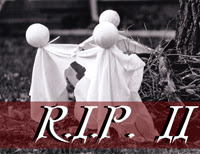 I'm not typically a creepy-book reader, as I'm prone to nightmares, but I thoroughly enjoyed curling up with atmospheric novels during last year's RIP (Readers Imbibing Peril) Challenge. Since last year's challenge ended, the special shelf of creepy, atmospheric or frightening books I've been setting aside has become very, very heavy. I'm pretty sure I heard wood groaning in relief as I lifted the books to photograph them. And, then the floor complained, but . . . oh, well. Must make stacks - can't let the toes get used to not having books fall on them.

There's no way I'll get them all read, (you'll say, "No kidding" when you see the photos) but that's all right. Peril the First suits my needs, nicely. The goal is to read four scary books. My stacks are so large that I'll have plenty of leeway. I'm not going to choose four specific books - I'll just attempt to read at least four and any others I manage will be bonus reads. 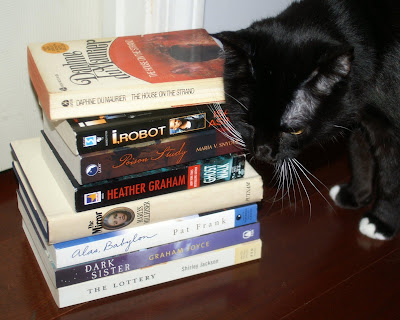 As if that pile isn't enough to choose from, I have a second stack. Poppet and Simone kindly posed with Stack #2: 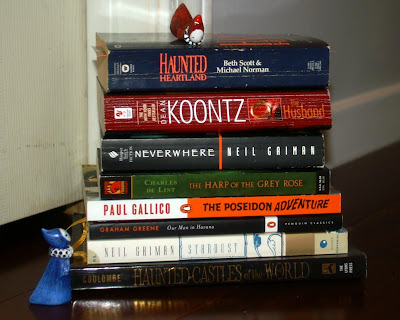 Enbiggening the photo is bound to make you feel terrific about the cleanliness of your own home. I had no idea that white door had become so filthy. I'll be scrubbing, after I finish this post. Miss Spooky only allowed me one shot before walking on, but it seems to have worked pretty well.

I have no idea which books I'll end up reading, although I took a sneak peek into Haunted Castles of the World and the image of Anne Boleyn roaming around the White Tower with her head under her arm creeped me out enough that I went back to my regularly scheduled reading.

Speaking of which, I am now three book reviews behind. Again. And, it's an hour till kiddo pick-up time. If necessary, I'll do another quickie triple review post. I've finished:

Not sure what I'm going to read next. Decisions, decisions. Castles of the World actually just arrived, a few days ago, from Paperback Swap. Other arrivals:

Off to nibble and scrub. Happy Reading!
Posted by Bookfool at 8:50 AM