First the sorry, sorry, sorry for not posting. I cannot believe the amount of driving that's required of me, this year. On Thursday, I was finally either inspired or driven mad and performed a Morning Cleaning Miracle (which, of course, was eradicated by the next day; you know how those things go). I stopped only a few times, to check email and blog hop for 5- 10-minute intervals.

At 1:30, I dashed off to sign the kids out from school, drove them around for an hour (including a stop at McDonald's for drinks) and then dropped them off at the pool. I returned home to refresh the cooler and fetch the camera, then zipped back at the pool, waited in the heat for the kiddo and drove him to band. With only 30-45 minutes of band left, I didn't have the time to return home, so I ran to the mall to entertain myself. Picked up the kiddo from band. Took him out to eat at McAllister's (again, a little too shy on time to go home and cook). Returned to the school for a swim meeting (kids and parents - effectively to tell us how much money to chuck over, what to schedule our lives around, and when to donate food and drinks). We returned home at 7:30 pm. Ugh. I mean it. I was flattened.

Friday was much the same, except I went to pick up the kiddo from the pool way too early and ended up staying out in the heat an extra 45 minutes or so to wait while the kids played water polo. This is my favorite photo: 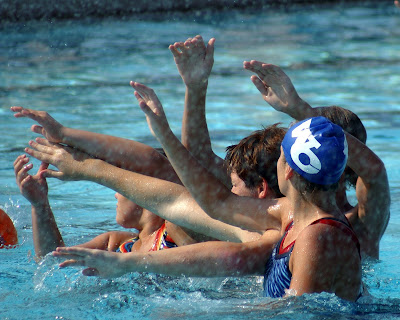 I just love all those arms that look like they're sprouting from some sort of human octopus.

I am now 5 book reviews behind (2 for Estella and 3 others), so I'm going to go with the quickie review method. Frequent readers know the heat has been sucking out my brain cells, so recent reads have all been light and fluffy. In brief:

The Case of the Missing Books by Ian Sansom tells the story of Israel Armstrong, a librarian who has left his London home to begin a new job as a librarian in Northern Ireland. Upon his arrival, however, Israel finds the library shuttered and locked, a sign on the door announcing that the library has closed. Israel finds that he has been reassigned to drive the ancient, rusted mobile library. When he enters the library building to collect the books and move them, though, he discovers that they have all disappeared.

The book is slapstick, absurd comedy and the mystery is barely a mystery at all. It's pretty obvious, early on, where the books have gone. But, it doesn't matter one whit. If what you're looking for is a light, funny, escapist read, The Case of the Missing Books is perfect. I particularly loved the difficulty Israel has communicating with the people in his new Irish village home. Having traveled to the British Isles, I know how tricky it can be to converse with those who speak the language but with a dramatically different accent and a complete set of unfamiliar expressions. I've wish-listed the next book in the series; definitely a big thumbs up for this one. I'm sending it on to my mother, who is in serious need of uppers.

Next up was Life's a Beach by Claire Cook, an unusual story in that the characters are remarkably normal people. Ginger Walsh has been through a string of jobs, boyfriends, and homes. At 41, she now lives in the Finished Room Over Garage (FROG) of her parents' home, has an artist boyfriend who can't get a grip on the concept of planning ahead, and occasionally watches her almost-50-year-old sister's children. She makes jewelry from sea glass and may soon be evicted by her parents. When her sister Geri's son is chosen to play an extra in a movie filmed locally, Ginger jumps at the chance to act as his on-set guardian. And when the gaffer takes interest in her, she questions whether or not either of the two interested men are right for her and whether she has, in fact, been feeding herself a line about being childless by choice.

Like Must Love Dogs, Life's a Beach has a quirky cast of characters and occasionally goes off on a dull tangent - a lengthy description about glass-blowing or jewelry-making induced the occasional yawn; and, Ginger's rudeness to the gaffer became very tiresome. But, I found that the story held its promise in a way that Must Love Dogs did not and I was glad I read it. It's worth reading but I wouldn't give it a top rating, due to the fact that it could have used a bit more pizazz. Still, I did really like the cast of characters and cared to know how things would turn out.

And, finally, I just finished Shopaholic & Baby! I cannot believe that such an easy, breezy book took me at least 4 days to complete.

Shopaholic & Baby continues the tale of shopping-obsessed Becky Brandon, nee Bloomwood, as she enters the next phase of her life. Pregnant and clueless, she shops with abandon for anything cute and impractical while overlooking necessities like changing tables and bottle warmers. Friend Suze tries to steer her on the right shopping path with her three little darlings in tow. Meanwhile, Becky's working at a new store that has had such a string of disasters it's practically empty; and, when she becomes a patient to a doctor known for celebrity births, she worries that Luke is having an affair as it turns out the doctor is a former university flame of his.

As usual, Becky annoyed me at the beginning of this book and then made her typical turnaround, saving the day for both Luke and her employer. Becky is just a delightful character who gets herself into all sorts of trouble, but always ends up realizing that what's really important in life is not her possessions but the joy of her loved ones. She has a huge heart and Shopaholic & Baby ended up every bit as satisfying as the other books in the series (although I really thought I was on the verge of throwing the book at the wall, for a while, there).

Tomorrow is Back-to-School night and darned if the husband isn't dashing out of town so I have to do the whole darned chauffeuring drink with a Back-to-School chaser. I've given him laser eyes, all weekend. Why is he not begging to stay home to stop the pain? I don't get it.

Hope to be back to normal posting, anyway. To heck with the house. It was clean for 24 hours and I'm happy.

Bookfool, ready to skip Monday and coast on into the next weekend
Posted by Bookfool at 7:35 PM