Crazy for the Storm by Norman Ollestad 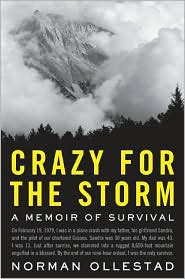 Crazy for the Storm: A Memoir of Survival
by Norman Ollestad
Copyright 2009
Ecco - Nonfiction/Memoir
272 pages
My parents subscribed to Reader's Digest for my entire life. I can't remember a time there wasn't a Reader's Digest on the coffee table or a side table in the living room. And, it was the Reader's Digest's "Drama in Real Life" stories that probably led to my lifelong addiction to stories like Crazy for the Storm -- stories of survival, of people who found inner strength to beat the odds.
Norman Ollestad was 11 years old and had just won a skiing championship when he boarded a chartered Cessna plane with his father, his father's girlfriend, Sandra, and a pilot who reassured his father that the weather was not a problem.

Caught in a blizzard, the plane slammed into a mountainside, killing the pilot and Norman's father on impact. Sandra was severely injured but young Norman assessed the situation and decided, after some time sheltering under a wing, that their only chance of survival lay in a dangerous descent down the mountain to a meadow where he'd spotted a cabin. A treacherous chute threatened to send them flying into trees or off a cliff, but Norman had been taught never to give up. He and Sandra began their slow and careful descent, stabbing sticks into the slick ice to keep from losing control.

After 9 hours, Sandra was dead but Norman had reached the meadow, alive. This is his story. But, it's not just a story of survival. It's a story of a relationship between a father and son and how that father kept his son alive by teaching him not to quit. It's also a story of a dysfunctional, divided family living on a California beach in the Seventies and how Norman dealt with his grief after the accident.

What I loved about this book was the tension. Chapters alternate between narrative describing the plane flight, crash and survival story and the tale of a young boy whose charismatic, enthusiastic, pushy father taught him to surf and ski -- cheerfully convincing him to get out of bed early to catch the best waves or to go up a ski lift in a snow storm to ski in the best powder when nobody else was daring enough to even go out on the slopes.

What I disliked about this book was the language and sometimes graphic nature. Young Norman was exposed to a strange, overtly sexual lifestyle (when he eventually moved away from the beach, this caused him some difficulty). He lived on a nude beach where people partied, drank heavily and had noisy sex. He had a filthy mouth for a youngster. And, he had a mother with an abusive boyfriend. His parents were divorced and his father lived nearby. Norman's life was not easy and not pretty but his father was the light of his life.

Surfing and skiing figure heavily into the chapters with his father and a glossary of skiing and surfing lingo would have been helpful, but I got the gist.

The two storylines gradually merge and the theme of learned perseverance pushes its way to the foreground. While young Norman's father was sometimes harsh, he was a pretty amazing man -- athletic, musical, charming, effervescent. It was his optimism and determination that rubbed off on Norman and kept him going, focused on the meadow where he'd spotted a cabin from an 8,600-ft mountain.

****Possible spoiler warning and mild rant!!! Skip this paragraph if you want to be surprised by what Norman discovered many years later, when he returned to the crash site.****

One thing about this book that bugged me was that Norman refused to see his survival as influenced by divine intervention in any way. While freezing on the mountain, he decided he would believe in God if he made it to the bottom. And, then he got to the bottom and decided God had nothing to do with it. Later, his grandmother died a terrible death from cancer that simply reinforced his thought process that we're all on our own, down here -- even after he climbed the mountain, many years later, and realized that there was no way he could have possibly seen the cabin from the crash site. I can't imagine going through such an experience and all the little coincidences that kept him alive without seeing the hand of God as a factor, myself, but laying that aside . . . I enjoyed the book.

****End spoiler warning!!! It's safe now, I promise.****
3.75/5 - A gripping story but not family-friendly (lots of language and naked people doing things naked people do -- I just wouldn't hand it to the kids) and sometimes the sports lingo is a little confusing. However, the pages flew and I absolutely loved the way he tied his own father-son story to his own experience as the father of a little boy who learned to love the same thrills in the same way. I could really relate to the inspiring-father bit.

Many thanks to Ecco Books for the advanced reader!

You'll probably never catch me doing this, but it's sure fun to watch: 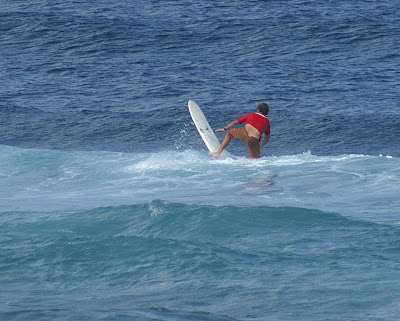