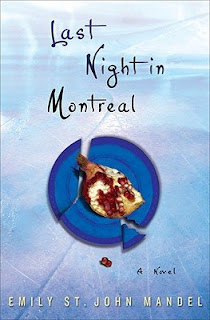 "All I can do is talk about writing, theorize about writing, but I can't take the leap. I can't just write. But I still call myself a writer What the hell do you call that if not somehow fraudulent?"

"And the rest of us?" asked Genevieve dangerously. She hadn't painted anything in a while.

Eli realized he was about to step on a land mine, and retreated. "Sorry, I'm rambling. Ignore me," he said.

Eli studies dying languages and has been working on his thesis for so many years that his school didn't bother to call him after the latest deadline passed. When he spotted Lilia in a coffee house and sat down with her, he was surprised to finally find someone who found his obscure pursuit interesting, someone he could talk to. She always has left him feeling a little uncomfortable, though. He talks about doing things; she has done them.
Lilia has spent her life disappearing. Awakened by her father in the middle of the night, when she was 7 years old, she walked down the stairs of her mother's house, out into the snow and into her father's arms. They drove away and kept driving, pursued by police and private detectives for so many years that Lilia has no idea how to stay still.
When Lilia kisses Eli on the head and tells him she's going for the newspaper, he's so immersed in his work that he doesn't noticed the few nuances that should clue him in to the fact that Lilia is leaving him. It's only hours later that he realizes she's gone and decides he must follow her. But, where? Eli doesn't know where to go until a postcard from a woman named Michaela arrives after a frustrating week. Michaela says Lilia is in Montreal and asks him to meet her.
Ignoring the warnings of his friend, Thomas, Eli hurriedly heads north. In the bitter cold of Montreal, Eli meets Michaela and slowly learns about her past and how it is intertwined with Lilia's childhood, how her detective father was hired to find Lilia and became obsessed, and the tragedies caused by that obsession. Still dangling is the mystery of why Lilia's father took her away.

Till the final pages of the novel, the reader is given little hints and it's a bit like trying to put a jigsaw puzzle together but finding that someone has removed a third of the pieces and is returning them bit by bit until the last piece falls into place at the end of the story, when things become clear and then there is a jaw-dropping bit of action. That hint of mystery made the pages fly.

There were little things that I had figured out in advance, but still . . . it's jaw-dropping. Last Night in Montreal is an incredible piece of writing, at once subtle and complex, perfectly paced and strung with little pearls of lovely writing that stop you in your tracks.
He was hunting just then, hot on the trail of something obscure, tracking a rare butterfly-like quotation as it fluttered through thickets of dense tropical paragraphs. . . . With this in mind, he returned reluctantly to the chase; a particular sentence had gotten all coiled up on him, and he spent an uneasy half hour trying to untangle the wiring and making a valiant effort not to dwell on her increasingly gaping absence while several academic points he was trying to clarify got bored and wandered off into the middle distance.
After thirteen hours of travel the train pulled into a shadowy underworld of tracks and cement platforms, three hours behind schedule, and stopped with a monumental hissing of brakes. He got out of the train and stood for a few minutes on the dim platform. He'd had a prolonged disagreement with an imperfectly preserved Amtrak Cafe Car sandwich earlier in the day, and he still felt a little ill.

The theme of this book seems to be that we all need to avoid just skating around the edges of life rather than simply plunging into the icy water and living. I love that.

I should also mention that the cover is my favorite book cover, so far this year. When I first saw a small image of the cover of Last Night in Montreal, I thought I was looking at a crepe with some sort of fruit spilling out. It wasn't till the book arrived that I realized I was looking at a pomegranate. Would you believe I've never seen a pomegranate in real life? Seriously, as far as I know I've never seen one. I've only seen photographs. I feel left out, somehow, but I love the cover image and I think it fits the book quite well.

4.5/5 - a rare, amazing debut. Last Night in Montreal is a fabulous book, well worth owning.

Upcoming giveaway: I'll be giving away 5 copies of if your kid eats this book, everything will still be okay by Lara Zibners, M.D. I just finished reading it, so I'll include a mini review in the contest post. It's just a matter of finding time to fit in the post. I'm heavily scheduled, this week, so I anticipate posting the contest info on Thursday evening. Check back if you have little ones or a baby on the way. I wish I'd had this book when mine were small.
The opposite of reading in Montreal in the winter . . . reading by the pool in Costa Rica. I don't know this guy, but there's nothing I love more than spotting other readers while I'm on vacation. 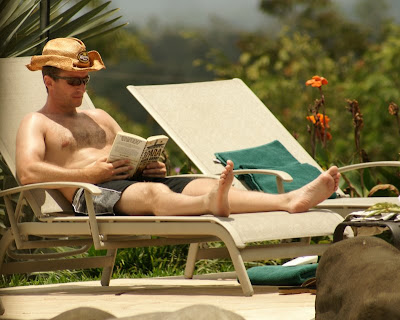