Strange things are afoot in the House of Bookfool. First, there was the discovery of The Littlest Pickle: 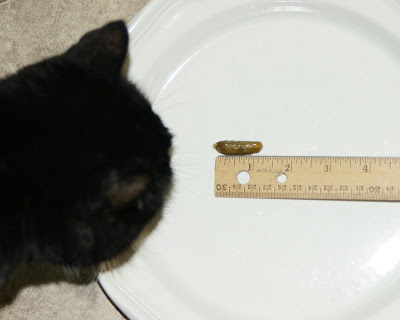 Awww, so cute! I think he deserves his own story, don't you? It won't have a happy ending if it's non-fiction, though, because after the cat and I measured him . . . well, I ate him. Yum.


So, do you guys have things like this hanging in your trees? I don't (although our dearly departed kitty, Sunshine, once brought us a snaky "gift" and we once had one climb the bricks beside our front door), but my next-door neighbor called me and asked me to come take a picture because she dropped her camera and broke it: 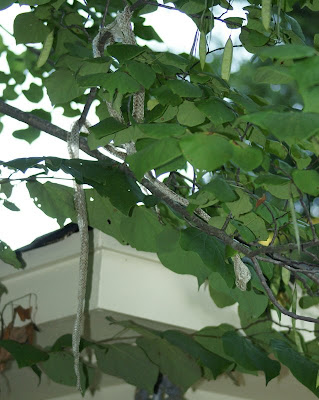 That is a complete snake skin, sans snake. I didn't know one could shed whilst dangling from a tree, but if that isn't all kinds of awesome, I'm a monkey's uncle. My neighbor said she's feeling a little antsy after this discovery. Can't say I blame her. Neighbor's husband said he's never seen such a complete skin. Here's a close-up of its head: 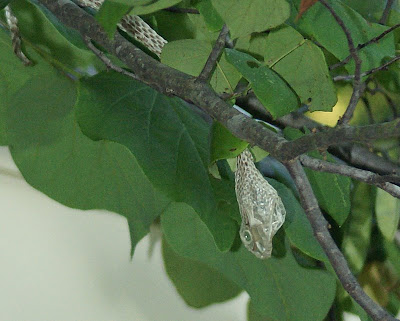 We actually found a nicely intact skin like that, once (I don't think my neighbor believed me, but I believe me and I guess that's all that counts). I showed it to the kids and then gave it to a science teacher, who was very grateful to add it to her collection of nifty scientific stuff.

I have finished Rubber Side Down: The Biker Poet Anthology, ed. by Jose (JoeGo) Gouveia -- which is really surprisingly delightful reading, if a little unusual -- and am on the verge of wrapping up The Unit by Ninni Holmqvist.

My husband took the day off and we spent our time cleaning, trying to pair up socks (a horrible, exhausting chore because there's just not enough light in our house to see the nuances in color and style), buying groceries and wandering around the explosive disaster known as Wal-Mart. They're rearranging and it's nearly impossible to find anything, but we happened across a totally unexpected surprise: The Trouble With Angels on DVD for $5. Squeeee! It's one of my all-time favorite movies.

(the mailman has been lacking in burdens, this past few days, but I did get plenty, this week):

by Mike DiCerto
Passeggiata: Strolling Through Italy by G. G. Husak (makes me want to hop a plane, but . . . to be honest, everything makes me want to fly away)
A Summer Affair by Elin Hilderbrand (very excited about this one because I've never been able to find her books in my library and my book group friends have all raved about Hilderbrand's writing)
Stand the Storm by Breena Clark, and
Offworld by Robin Parrish

All are new authors to me. I crave variety, you know. Which brings to mind that new cupcake book by Martha Stewart. It's possible I'll have to locate a copy, if only for the tramisu cupcake recipe. Oh, how I love tiramisu.