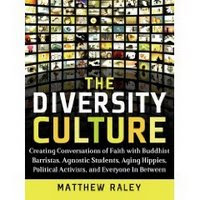 I didn't finish this book, but there were things I found interesting within the 33 pages I managed to read before deciding it was not the book for me. The book is subtitled, "Creating Conversations of Faith with Buddhist Baristas, Agnostic Students, Aging Hippies, Political Activists, and Everyone in Between." At the point I quit reading, I was having trouble with some of the comparisons between today's non-believers and the Samaritans, which I think boiled down to just not knowing my Bible well enough. I liked this, though:

The Diversity Culture [author's definition]: The dominant American ethos of openness toward all beliefs and spiritual traditions.

This culture cries for a label. It needs to be distinguished from the consumer society, but a tag remains elusive. David Brooks calls it Bobo, "bourgeois bohemian." Bill O'Reilly calls it "secular progressive." Rush Limbaugh calls it "liberal wacko." I call it the diversity culture, after its top priority.

Basically, the author is a Christian minister who seeks to create open dialogue between believers in his own faith and everyone else, knowing that the young adults of today's (I'm assuming American) society are less stringent about religious beliefs and more willing to accept diversity of culture, ethnicity, and morality -- all of which make a preacher guy really uncomfortable.

How to overcome the problems of communicating with a set of people who often have radically different beliefs from church ministers is the point. I wasn't getting it, though, and I'm not sure the book applies to me; in fact, Rush Limbaugh would probably label me a liberal wacko so maybe I'm on the wrong side of the coin. I'd particularly recommend this for people who consider themselves evangelistic or who desire to learn how to communicate across those boundaries in order to share their beliefs without offending.

Email ThisBlogThis!Share to TwitterShare to FacebookShare to Pinterest
Labels: book reviews, DNF but advise you to read my reasons