May Reads in Review

I think the clerk was a little suspicious when I whipped out my camera in Borders, so I acted all nonchalant ("Dum, dum de dum") and then snapped this photo while he was busy shelving books. Ah, the joy of those wonderful club chairs! 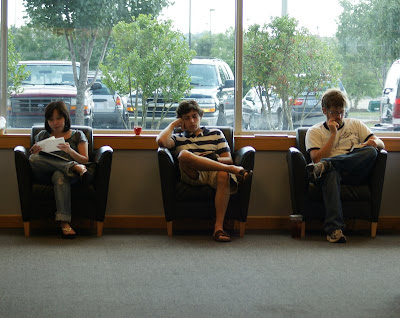 At least I'm not quite so late wrapping up, this time around. It's only 9 days into June! Pretty good, for me.

YA - Young Adult (MR-YA means Middle Readers or YA, meaning I'm unsure which but probably both age levels would enjoy it)
M - Memoir
NF - Non-fiction

Bookfool's May Reads in Review (links to reviews, if applicable):

68. The House in Grosvenor Square by Linore Rose Burkard - A sweet Regency romance with a little slapstick caused by a couple of bumbling, would-be kidnappers. Loved this one and really appreciated the glossary of Regency terms.

69. The Wonder Singer by George Rabasa - An opera star chooses a nobody to write her memoirs, but her untimely death means he has to race to finish the book and hide the interview tapes or a well-known hack will steal his glory. Great writing.

70. I Am the Central Park Jogger by Trisha Meili (NF/M)- I would not have read this if not for the recommendation someone gave me in a memoir drawing post. Very good & I was relieved that she remembered absolutely nothing from her attack.

71. No Touch Monkey! by Ayun Halliday - An American hippie chick's adventures in places I'll look at in books but would never dream of going. Hilarious and frequently disgusting.

72. Memory's Gate by Paul McCusker (YA) - Something strange is going on at the retirement center and it has to do with a creepy man and a time fault.

73. I Loved, I Lost, I Made Spaghetti by Giulia Melucci (NF/M) - A memoir about a woman who loves to cook, including recipes.

74. A Girl's Guide to Modern European Philosophy by Charlotte Greig - The fictional tale of a girl who sleeps with two guys, gets pregnant, and turns to her study of philosophy to decide what to do. I raced through this one; loved the setting in 70's England.

75. On the Run by Bill Myers (YA) - A young boy with healing powers is chased by bumbling henchmen while the devilish bad guy hisses at his parents. Adventurous, but annoyingly heavy on the archetypes.

76. Love Begins in Winter by Simon Van Booy (short stories) - The one book I'd shove into your hands if you were standing next to me. I absolutely love Simon's writing. This was a reread, although it was just recently published.

77. The Dead and the Gone by Susan Beth Pfeffer (YA) - An asteroid hits the moon, leading to tidal waves, volcanoes, climate change, death, violence, mayhem. This time told by a devout Catholic boy trying to keep himself and his sisters alive; second in the series.

78. A Lucky Child by Thomas Buergenthal (NF/M) - The Holocaust memoir of a man who was imprisoned in concentration camps as a young boy and now devotes his life to working for the protection of human rights via international law.

79. The Non-Runner's Marathon Guide for Women by Dawn Dais (NF/M) - One woman's hilarious tale of how she went from couch potato to marathon runner, including journal entries and training schedules.

80. Gossamer by Lois Lowry (MR -YA) - The little creatures who imbue humans with dreams work to save a young boy, an older woman and a young woman from the nasty nightmare-makers. A very sweet story with a dark side.

81. Evolution: The Grand Experiment by Dr. Carl Werner (NF) - The author's analysis of evolution, focusing on the quantity of fossils and the evidence he finds lacking to link various creatures in the evolutionary chain.

82. The Nonesuch by Georgette Heyer - A wealthy confirmed bachelor inherits a crumbling estate and plans to turn the home into an orphanage after repairs, but he does not intend to fall in love with a teacher who chaperones a bratty teenaged beauty. I love Heyer.

83. Olivia Kidney by Ellen Potter (MR-YA) - Young Olivia Kidney moves into a new apartment building and finds surreal adventure with her neighbors, including a ghost, an old lady with an apartment made of glass, a pirate and a princess. Funny & poignant.

84. Holly's Inbox by Holly Denham - A book written entirely in email format, but with a surprisingly well-rounded cast of characters. Sucks you in like a black hole, but be forewarned - lots of sex talk. I could not put this one down.

85. Last Night in Montreal by Emily St. John Mandel - A young woman who has spent her life disappearing find that she doesn't know how to stop. Excellent debut; wonderful theme about plunging in and living your life instead of skating around the edges.

This was a month chock full of good reads and I really enjoyed almost all of my reading, but I always love Simon Van Booy's so Love Begins in Winter was definitely my top read. The Nonesuch was beautifully plotted and romantic, The House in Grosvenor Square was charming, The Non-Runner's Marathon Guide was hilarious. Gossamer was sweet, Olivia Kidney convinced me I really do need to read everything Ellen Potter has ever written. Last Night in Montreal is a stunning first novel. Holly's Inbox was a hoot. A Lucky Child is an amazing Holocaust tale. No Touch Monkey! was both side-splitting and totally gross. The Dead and the Gone was okay -- not as exciting as expected.

pissed me off (too short, too "We're trying to hook your kid into buying a series"), although it was certainly adventurous. I Loved, I Lost is the one book I think I'd un-read, if I could. Upon reflection, it was kind of a sex, drugs and whine book but I did enjoy it while I was reading it. Funny how I feel negative about it, now. I liked it at the time, but I think maybe that had to do Mother's Day and feeling the pang of being an orphan a little more strongly, last month. I'm trying to ignore the Father's Day ads.

Next up will be a sneak peek into a book I'm going to start reading, tonight, so I can't say anything about it, yet. This past weekend, I spent most of my time shopping in the Big City (two days in a row) and a few hours at my son's swim meet. I didn't read much, but I'm on the verge of finishing Don't Call Me a Crook by Bob Moore, which I'm finding both horrifying and hilarious. More on that, soon. There may be a couple of sneak peeks without reviews, before I review Don't Call Me a Crook, depending on whether or not I can get myself to read. I'm a little bent on house-cleaning, today.

The Ten-Year Nap by Meg Wolitzer (from Paperback Swap)

During my nervous breakdown I want to have a biographer present by Brandon Scott Gorrell (from Muumuu House), and

The Big Steal by Emyl Jenkins (from Algonquin Books)

How was your weekend? Mine was lovely. I bought books. I'm in the mood to go on a trip by myself -- kind of tired of seeing the husband off (he's in Germany), so I bought two Insight Guides: Ireland and Utah. Don't ask why Ireland and Utah. I guess they both look like good places to walk. I want to take a walking/sightseeing/writing journey. And, I ordered a book on road-tripping across the U.S.

Off to read and fold laundry (always a perennial favorite, that laundry-folding job),

Bookfool with piles of clean stuff