Don't Call Me a Crook by Bob Moore 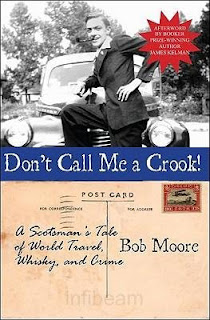 It is a funny thing about Chinamen, but they do not seem to be able to work without singing. In the towns the coolies call "Yo-he-ho" all the time they pass backwards and forwards with cargo. Even if they work all through the night they make it. You hear it from your hotel or from your ship, if you are tied up close.

--from Advanced Reader Copy -- changes may have been made

Subtitled A Scotsman's Tale of World Travel, Whisky, and Crime, Don't Call Me a Crook is the memoir of a very naughty rogue from Glasgow, Scotland. Originally published in 1935, it describes his years of traveling as a marine engineer and working odd jobs throughout the world while living a life free of morals or obligation, dodging the authorities and avoiding victims in so many locations that he laments his shrinking world, unable to return to the cities in which his crimes occurred. Bob was a rapscallion and, yes, he really was a crook.

But, Don't Call Me a Crook is awfully fun if you just lay aside the swindling, theft, womanizing, irresponsibility, murder, heavy drinking, arrogance, bigotry and such. In general, Bob Moore (most likely a pseudonym) was a man who lived by his own set of rules. He must have been rather good-looking and charming because he was able to con women and finagle his way into employment with surprising ease. The cover photo is not, in fact, a picture of the author but one that the publisher found suitably cheeky and fitting to the time period.

Don't Call Me a Crook is adventurous and wild, a bit like watching a train wreck in that the events are often horrifying but you can't tear yourself away. At least, I couldn't. Fortunately, the delightful Lisa Roe gave me fair warning, so I knew what I was getting into when I opened the book. This book is certainly not for the faint of heart but it's entertaining. I especially enjoyed the peek into the 1920s and the action -- there was seldom a dull moment in Bob Moore's life.

My favorite scene involved a little coffee stand where Bob was employed for a single day. In that brief time, he managed to spill some grease and set the place on fire. Never one to own up to the chaos he caused, Bob promptly left town. The story read like a slapstick anecdote. One minute he's starting a new job and the next minute he's dashing away like a madman.

4/5 - for entertainment value and historical perspective.
Posted by Bookfool at 10:07 AM