The King's Legacy: A Story of the Wisdom of the Ages by Jim Stovall 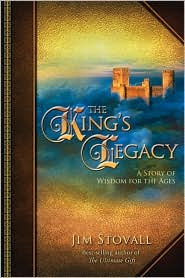 From the promotional material:

Once upon a time, in a land far, far away, there was an enchanted kingdom ruled by a benevolent and much-loved king who, through his uncommon wisdom and insight, led his people through many difficult times to a period of peace, prosperity, and happiness such as the kingdom had never known.

Now, nearing the end of his reign, the king longs to leave a lasting legacy for his people. What would be a fitting memorial to his time on the throne?

The king calls together his wise men to come up with a solution. His choices: A monument, a gold coin bearing his likeness, a colossal statue in his image or the most profound words of wisdom in the world. He settles on determining the Wisdom of the Ages, but then finds himself perplexed as to what exactly the Wisdom of the Ages is and how to share it.

The king paces and frets until he comes up with the idea of allowing his citizens to share the wisdom of their own lives. Into the palace stomp a succession of archetypes who share modernized wisdom that made this fool roll her eyes, but which is perfectly sane in a modern setting -- it just doesn't fit coming out of the mouths of a medieval physician, soldier, mother, etc. The physician mentions the "virtual mountains of information readily available" about health and well-being. Well, of course, during medieval times there were no mountains of information about exercise and eating right, nor could most of the kingdom have read them, if there were. One simply has to shut off any understanding of such a time and imagine such a kingdom plopped down in modern times but without modern gadgetry. It doesn't make a whole lot of sense, but the point is to think about what's important in life.

In the end, the king chooses a single bit of wisdom that he believes encompasses all that he has heard. I'll keep that bit secret, just for the sake of not spoiling the book.

While I found this book a bit of an eye-roller, I think those who would enjoy it are people who like books that mix up a tale of wisdom in with a little bit of old-fashioned storytelling. Fans of The Alchemist or Richard Paul Evans' books, for example, would probably really enjoy this book. I've never managed to read all of The Alchemist and The Christmas Box annoyed me, so I'm obviously the wrong audience for this book.

Jim Stovall is also the author of The Ultimate Gift. My son and I loved the movie and I've yet to read the book, but I do want to read it. I would definitely not write this author off on the basis of a single tale.

3/5 - Average, a bit repetitive and definitely a mixture of wisdom from the modern world in a fairytale setting (which basically comes off as "weird" to me, but I know there are plenty of people who love that). Recommended to readers of Richard Paul Evans, Paulo Coelho and similar authors.

Isn't that cover beautiful? The book was originally published in 2003 and the new version is an "updated gift edition". If you know someone who likes this story, already, I'd highly advise purchasing the gift edition. It is absolutely beautiful .

Next up will be some babble and an award, followed by a sneak peek and review of Scared by Tom Davis. I read Scared, yesterday, and I still feel like shouting, "Someone call Oprah!" I would love to see the book get Oprah-level exposure. It's a fictional story that describes the plight of Africans facing rampant disease, poverty and lawlessness brilliantly. Scared is an incredibly moving book -- gut-wrenching, really. I can't wait to write about it.
Posted by Bookfool at 12:22 PM