In the Sanctuary of Outcasts by Neil White 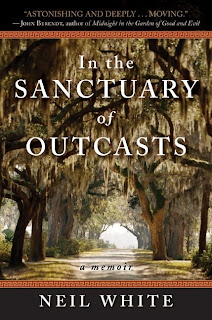 In the Sanctuary of Outcasts by Neil White
Copyright 2009
William Morrow - Nonfiction/Memoir
318 pages, incl. bibliography and resources
Author's website
So, this is why I love memoirs. You never know when you're going to happen across some totally unusual, unexpected memoir that nobody else is likely to come anywhere close to writing. In the Sanctuary of Outcasts is definitely unique.

Neil White was a very driven, goal-setting kind of individual who hoped to someday make it into his favorite book, The Guiness Book of World Records. After graduating from The University of Mississippi, he started publishing a newspaper that was in direct competition with the Oxford Eagle in his hometown: Oxford, Mississippi. He was successful for a time, but eventually merchants had to choose between advertising in the older, established newspaper or White's newspaper. He began to lose money.
To avoid bouncing checks, White began to "kite" them. I had no idea what "kiting checks" meant, but the author described it as creating your own float by writing checks on two different bank accounts, depositing money that effectively doesn't exist to create a false balance in each account. He justified the practice as a way to buy time until he got more money, but kiting is a federal offense. Eventually, the debts became overwhelming and Neil White went bankrupt.
White managed to gather enough investment money to pay off his debt and keep the FBI at bay, but then he moved to the Mississippi Gulf Coast and started publishing a glossy magazine. Once again, things went well for a time. He and his family lived in a large house, owned a boat and spent a lot of money. Then, things began to go downhill and White returned to kiting checks as his debts grew. This time, White was caught and given an 18-month prison sentence. And, that is when In the Sanctuary of Outcasts begins.
The story:
Carville was an extremely unique prison. Located in Southern Louisiana, Carville was originally established as a leper colony in 1894. When Neil White arrived in May of 1993, the estate housed a combination of minimum-security federal prisoners and people suffering from Hansen's disease (a newer name for leprosy). The patient living areas were separated by a breezeway from that of the prisoners and were off limits, but prisoners and patients still managed to intermingle. At first afraid of the patients, White eventually got to know some of them through his job in the cafeteria, learned more about Hansen's disease and became friends with many of the patients.
Early in his imprisonment, the author decided he would secretly interview people and write a George Plimpton-style exposé, but eventually that idea faded as he got to know the residents. Ella, who was in her 80's, particularly touched White's heart. She had spent most of her life at Carville, separated from her family. Ella had a marvelous attitude.
White's new friendships with Ella, other patients and several of the prisoners, coupled with the fear of losing touch with his children eventually led the author to realize that he needed to change, but he still had a long way to go because in his heart he still wanted to be a record breaker and longed to be admired. Slowly, but surely, he worked on improving himself. His story is absolutely fascinating. In the Sanctuary of Outcasts was really hard to put down. I seem to be having that problem a lot, lately.
4.5/5 - Excellent storytelling, a lovely tale of redemption, solid writing, a firm sense of place. I took off a tiny bit because the old Neil White is the kind of person I'd secretly like to kick in the shins and sometimes I got a little tired of hearing about how his mind worked when he was all about money and image. Fortunately, he got over himself. He very kindly summarizes his time since he got out of prison, so there aren't any annoying loose ends.
Cover thoughts: I love that gorgeous cover, shown above. Unfortunately, I didn't make it to Mr. White's signing in Vicksburg so my copy is a boring old ARC with a single twig on a white background. Still . . . I feel very lucky to have won this book because, much as I love the look of Spanish moss dripping from oak trees, I don't think this book would have hit my radar. When it's hot out, I have a tendency to walk right past anything that looks distinctly Southern. And, baby, we are cooking in Mississippi.
Many thanks to The Book Lady and Folio Literary Management for the chance to read this book. I won 4 more in that same drawing and most are memoirs. Bounce, bounce, bounce. I just love memoirs.
Side notes: Neil White was friends with Willie Morris and plays tennis with Barry Hannah. Oh, man. Envy!!! The late Larry Brown used to live not far away, William Faulkner made his home there, and Oxford is, of course, the home of Mamasita, the Off-Square Books store cat: 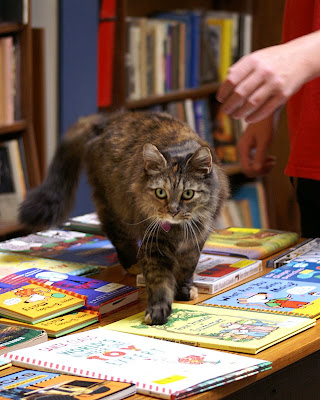 If you're going to get stuck in Mississippi, I recommend that you try real hard to end up in Oxford.

Just finished reading: The Physick Book of Deliverance Dane by Katherine Howe. Which brings to mind the fact that this has been a really, really fun reading year. Watch for a glowing review of Physick, after I get my house clean. But, don't hold your breath. I've been doing an awful lot of siesta reading and not a whole lot of tidying.
Posted by Bookfool at 10:19 AM