In the sidebar and an award

I've just made a shocking discovery. Two depressing reads in a row = 1 Too Many for me. Actually . . . not shocking at all. I'm terribly moody. So, it was probably a really bad idea to pick up The Unit and start reading, again, after Scared. Wait! Tomorrow you'll hear about Scared; I'll be posting the sneak peek and a review, assuming Blogger doesn't pull the plug on me before I get all my ducks lined up in a row.

Oh, to heck with holding back. Scared is about a man who takes a prize-winning photo in Africa and then wins an award and has to live with the haunting image, the trauma of what he's witnessed, the loss of a friend and the knowledge that he took pictures but did nothing to help. Years later, he is sent back to Africa on assignment. This time he meets a beautiful little girl and cannot simply stand by and watch her starve. It's based at least in part on the photographer Kevin Carter, who took this picture of a dying girl with a vulture behind her (page down past the header), won a Pulitzer Prize, and then committed suicide. If Oprah doesn't hear about this one, I think I'll try to call her myself. Scared needs and deserves attention. Someone call Oprah!!

In fact, you are going to be hard-pressed to shut me up about Scared. It's the most moving thing I've read all year. But, wait till tomorrow for the real review. As I was saying . . . maybe a mistake picking The Unit back up because The Unit is a dystopian novel about people who have been discarded by society. Once you reach a certain age -- 50 for women; 60 for men -- if nobody is dependent upon you, the government sends you off to a lovely place where all your needs are met, you're completely locked into an indestructible dome world and watched by cameras at all times, and they gradually parcel out your organs till you've reached the point that you have nothing left to harvest . . . 'cause you're dead.
Oh, my gosh, is it ever depressing. But, it's so good. I just don't think I can handle gut-wrenching twice in a row, so I may have to set The Unit aside for a few days.
Also reading:

In the Sanctuary of Outcasts by Neil White - one of the books I won during the BEATwittyParty and which was sent to me by Folio Literary Management. By remarkable coincidence, Neil White is going to be signing in Vicksburg, tomorrow. So, I'm going to see if I can get the book finished before 5:00 pm on Monday. It's great, so far. White was a federal prisoner in a Louisiana prison with an odd mix of criminals and lepers -- literally, people who suffered from Hansen's disease, also known as leprosy. It's very readable and, in fact, is surprisingly light and fun.
My copy is an ARC, thank goodness, so I don't have to feel bad if I decide to fork out the big bucks for a book with that gorgeous cover. Lines of ancient trees dripping with Spanish moss? Quintessential Deep South. I just love that cover. My ARC is white with a single branch on the cover (yawn - so glad the final cover is different). I'm enjoying the book immensely. 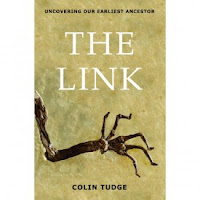 I read 74 pages of The Link and really was into following little Ida around the jungle until her unfortunate end, when the ancient lake (now the famed Messel Pit in Germany) burped up poisonous fumes, Ida inhaled, fell into the water and sank. I thought it was fascinating how a young scientist was pulled aside and offered a perfectly-preserved fossil, but only if he was willing to pay $1 million and agree to the terms -- among them: the seller's name would remain a secret. Spy stuff! Okay, not spy but science intrigue! Exciting! And, then I set it down and haven't touched it for a week or so. But, really, The Link is well-written and fascinating.
And, the monkey is already long dead, so it shouldn't be too heart-breaking. I hope to read more about Ida and the adventurous scientists passing around her dead bones, tonight. Or, maybe tomorrow. Soon, anyway.

50 People Every Christian Should Know has been in my sidebar for even longer -- probably a month. Why?? A couple of reasons. It's heavy. The book is a compilation of previously-published mini-bios about people who were important to the Christian religion in some way. Whether they were great ministers, writers or missionaries, each played a crucial role. Some of the names and their works are familiar to me and those are, generally, the bios that are easier to read. But, the vast majority are written, I would say, for those who are already well-versed in the deeper workings of the Christian religion. I don't, for example, know about the various movements and factions -- how one set of Christians broke away from another set and formed a new church (which has happened quite a bit).
In other words, I'd say the book is really not all that accessible to the general Christian population. My thought is that it's more firmly directed toward theologians, ministers, people who have already studied and have an understanding or at least a working familiarity with these so-called "spiritual giants". It's been very slow-going for me. Amy Carmichael has kept me going. I can only read one or two bios at a time because there's so much I don't get that they make my head spin, but I know about Amy Carmichael and I want to get to her bio without skipping ahead. Unfortunately, she's way the heck toward the end of the book, since it begins with Martin Luther's wife (one of my favorites, so far), way back in the Middle Ages. and moves forward through time. I'd give this one another month and expect a lot of other titles to continue to interrupt the reading. 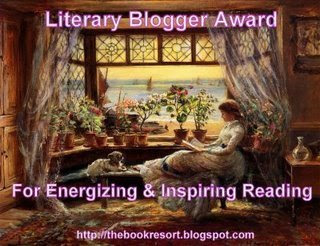 And, the award . . . Gentle Reader has endowed me with the Literary Blogger Award. Many thanks, Gentle Reader! One is supposed to pass on the award to bloggers who make the recipient feel warm and comfy inside. Well, shucks. I hate to be a party pooper, but I think I'd be hard pressed to limit the giving to a mere 9 bloggers, so anyone who reads this: TAG! Let's face it; you all make me feel warm and cozy.
Hope everyone's having a fabulous weekend!
Bookfool, wilting on a 2-ice-cream-bar day (next time use a bowl, Bookfool -- they're melting fast)
Posted by Bookfool at 6:17 PM