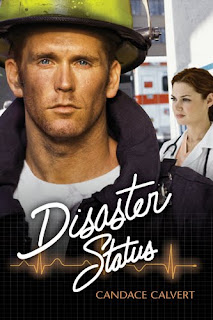 Erin Quinn has just begun her much-needed day off from her job as charge nurse in the ER at Pacific Mercy Hospital. But, when a plane crash causes the spread of toxic chemicals, sickening field workers and nearby residents, her day off turns into a stressful disaster status. Called in to the ER, she finds herself in conflict with a handsome incident commander from the fire department, who wants things done "by the book" -- his book, no exceptions.

Fire captain Scott McKenna is no stranger to tragedy. After the deaths of his father and sister and the hospitalization of his nephew with a crushed leg, he has thrown himself into his work; even his off hours are punishing. But, he may have met his match in Erin Quinn. Equally determined and stung by past hurts, the two can't help but clash when their tightly-controlled worlds collide.

While Erin and Scott face off over the handling of the disaster their paths keep crossing outside of work, as well. But, Scott plans to move away to escape bad memories and advance his career. Can Erin help Scott finally find the peace he seeks? Or will he be just one more big mistake in Erin's long history of problem men?

Character-driven, action-packed and romantic, Disaster Status is the second book in Candace Calvert's "Mercy Hospital" series. I haven't read the first, although it's on my wish list. I found the characters very likable. Erin is a Christian who leads a morning prayer session at the hospital while Scott has let go of his faith and no longer prays, since the death of his beloved sister. His young nephew, still hospitalized after several surgeries, may lose his leg.

Erin and Scott each have their inner demons to battle. Scott needs to deal with his grief and Erin is angered and confused by her wayward father's attempts to communicate with her. Both take out their anger and frustrations in physical ways: scrubbing mold, swimming in the ocean, boxing, running, working long hours. They guzzle caffeine to fight fatigue and the coffee and bait shop is one of the places their paths oddly cross.

There are several secondary storylines. An ER doctor whose husband cheated on her takes her greatest comfort from riding her horse. A janitor who served in Desert Storm and wears a prosthetic leg goes off his medication and thinks he's on a mission to save the child who might lose his leg. And, Erin's grandmother spends time comforting patients as a volunteer, in spite of Erin's concern that volunteering at the hospital will only bring back bad memories of her husband's final days.

I thought the main storyline was great. Character-driven romance is not necessarily what I'd call "my thing", but I like it now and then, if done well. Calvert's writing is clear and her characters are well-defined. I enjoyed "hanging out with them", so to speak, and Disaster Status turned out to be one of those rare books that I read in a single day.

Most of the secondary storylines fed nicely into the plot (one was a little weak and could easily have been cut, but it wasn't annoying -- just unnecessary). There were also some lovely little quirks that I enjoyed, like the story of how Erin's grandmother acquired her elderly goldfish and the names of the coffee flavors: Sea Dog black (Scott's favorite) and Starfish Latte extra cinnamon (Erin's coffee of choice). I found myself craving a latte with cinnamon and smiling every time they ordered the same old coffee.

- Excellent characterization; a plot-driven novel with plenty of action, some fun quirks and a sweet romance with mild Christian elements. In spite of the fact that my preference is plot-driven novels, I found the book entertaining and fairly fast-paced.
Posted by Bookfool at 6:00 AM