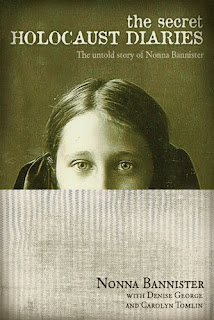 The Secret Holocaust Diaries is a book in that contains the diaries of a young woman who was taken from Russia to Germany to work in a labor camp during WWII. But, in addition to the diaries that Nonna kept hidden away for decades as she kept her past secret, even from her husband, there are poems that she wrote and a lengthy history about her family and early experiences that give the reader a depth of understanding that's often abbreviated or lacking in personal accounts of the Holocaust. It's such a deeply personal diary that the introduction had me in tears!

The book opens up with the train trip to Germany. Nonna and her mother Anna were packed into cattle cars but, unlike the Jews who were also transported in that manner, they were fed and allowed to go into the woods for bathroom breaks. During their trip to Germany, several horrifying experiences gave Nonna a hint of what was in store for them and one particular tragedy eventually led to the death of her mother, Anna, years later. That's a spoiler, so I won't tell you the details but I will say The Secret Holocaust Diaries is an amazing book.

After the description of their train ride, Nonna goes backward in time and describes her family history. She came from a wealthy family with mills, workers and large houses spread across Russia (I think the correct number is seven mills, but don't quote me on that). Her mother and mother's siblings were accustomed to moving from house to house and because of their frequent moves they were born in different cities. Nonna's grandfather was in the Tsar's Imperial Guard and was brutally murdered at the beginning of the Bolshevik Revolution. For the family's safety, Nonna's grandmother moved with her 6 children to their Ukrainian mill and its large house, which was farthest from Moscow and, she hoped, safe from the violence.

It was a good move. The family grew up happy but kept their beliefs quiet -- both political beliefs during the revolution and religious beliefs after the churches were closed. Nonna's mother married a Polish man who also kept his origins secret and they lived in various homes near the Black Sea. Even during the Depression and as WWII broke out, they lived very well. But eventually their situation deteriorated and they moved back to her grandmother's Ukrainian home. Not long after, the Nazis arrived.

Most Russians were evacuated by train as the Nazis approached, but Nonna's family refused to leave and they lived in tremendous hardship during the occupation, knowing that they'd be equally abused by returning Russians and thought traitors if the war turned in their favor. It was during this time that Nonna's family began to crumble. Again, I think that's a bit of a spoiler, but in the end, Nonna was the only survivor.

Nonna's father was a linguist who began to teach her languages when she was quite young and it was her knowledge of a variety of languages coupled with the fact that she'd learned to keep certain information quiet that eventually saved her.

I couldn't put this book down till I finished it, which meant an all-nighter. I always find the stories of Holocaust survival amazing, but The Secret Holocaust Diaries is a little unusual in that Nonna lived in work camps at times, but she was never in a concentration camp -- and yet she still suffered terribly. It's quite a bit different from most of the Holocaust tales I've read. I was particularly amazed at the ingenuity of Nonna's mother and grandmother.

For example, during a time when they lived in occupied territory, there were no mills in operation because the Russians had blown up all the mills to keep the Nazis from using them. Nonna's mother created her own miniature mill using two buckets, one inside the other. Nails poked through the buckets served as the grinder when the buckets were twisted with wheat between them. The wheat and chaff were separated by hand prior to grinding and then the ground wheat was boiled for hours to make a kind of creamed wheat cereal. This is the kind of thing I think we've lost in modern days, the ingenuity to survive on basics if necessary.

5/5 - An utterly fascinating true tale of a young lady who grew up privileged, only to see everything and everone she loved eventually taken away. The writing is a tiny bit awkward at times, simply because English was the last of the 7 languages Nonna learned but it's rounded out and clarified with occasional notes inserted by the two women who helped put the book into readable form: Denise George and Carolyn Tomlin. Highly recommended.

We had quite a wild week, last week, as we're painting walls in preparation for flooring our kitchen and utility area . . . and in the midst of this mess, our dryer died. So, we had kitchen things (the breakfast table and some free-standing cabinets, plus the contents of the shelves) crammed into our tiny living/dining area and dirty laundry piled anywhere we could find space to sort. We have no basement in which to toss things during upheavals, thanks to our clay soil.

What a mess! The new dryer will arrive Friday. In the meantime, Traveling Huzzybuns keeps leaving town. So, the week I expected us to paint and put down flooring in lieu of a family vacation was interrupted by 3 days without the muscle man and a bunch of time tripping over dirty clothing.

I reacted as any good reader does. I holed up in a corner and read, when I wasn't hanging out with the kiddo. It's awfully hard to get much else done when you have no room to manuever. Fortunately, things are improving. Huz cleaned up his mess in the kitchen as much as possible and ran some clothing to the laundromat to dry, then I folded while watching episodes of Burn Notice. Kiddo is back at school, so the job of the day will be clearing off the dining table -- also known as "Kiddo's work table" because that's where he does his school work.

Fortunately, our Little Fi has kept us in stitches. She is by far the most active, funniest, feistiest and smartest kitty I've ever met. If she has trouble licking up those last few bites of canned food in her bowl, she just sticks her paw into the bowl and uses it like a fork, snatching up a bite and eating it off her paw. Someday, I've got to try to get a picture of her eating with her paw.

Recent purchases that I bought mostly because I could not bear living without the new album by NewWorldSon (look up "In Your Arms" on YouTube -- their homage to the 60s -- if you're looking for a fun, upbeat song that's great for dancing or running):

Solar by Ian McEwan - because I heard it's funny (always good, in my opinion) and about global warming (yes, I believe in climate change)