My review of this DVD is at the bottom of the post. I think you can get the best idea of what the DVD is like by watching the excerpt included. This is a "Christian alternative to yoga", which sounds a little bizarre but the idea is to avoid doing Hindu poses. My opinion on that is below. 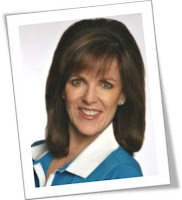 Laurette Willis, the founder of PraiseMoves®, is a Women’s Fitness Specialist and certified personal trainer, as well as a popular keynote speaker and an award-winning actor and playwright. She has produced the videos PraiseMoves™ and 20-Minute PraiseMoves™ and written BASIC Steps to Godly Fitness. 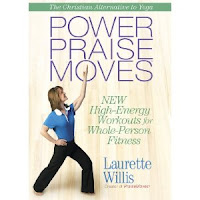 AND NOW...A SAMPLE OF THE VIDEO:


I always watch exercise videos through before actually trying them out, so I sat and watched the DVD after two days of working out on my treadmill and actually haven't done the workout, yet. While I think it's best to watch the excerpt to formulate your own opinion, the basic idea is that yoga is based on Hindu moves and Laurette Willis created a Christian version that gives you the same benefits but renames the moves (it's been a while since I've done yoga; I can't say if any of the moves are altered), with piano music that sounds very much like soft church music and occasional Bible verses.

My opinion: Parts of this video are a little slow, but there are some moves that definitely look difficult. I tend to enjoy really pushing myself; I've done Power Yoga and liked the fact that it doesn't put me to sleep. There have been times that I've had a problem with a bad hip or a stiff neck and have had to switch my exercise program to easier, stretchier workouts (I actually have a workout video for "people in pain"). I think there's a little of both in this workout -- something gentle but strengthening and very, very relaxing and some parts where you can really push yourself. As with yoga, the workout instructor talks about breathing and posture.

The sensation that you're using your exercise time to praise God is really pretty cool. It gave me the same "refreshed" feeling, just watching the video, that you can get from attending church services. Do I think regular yoga is "spiritually dangerous" because it uses Hindu poses? No, I do not. If you're just doing yoga to exercise, I simply don't see the harm in it unless the instructor is guiding you to worship Hindu gods, which is not something I've ever seen. While I don't necessarily agree that doing ancient poses is spiritually dangerous to non-Hindus, I will say I really like the idea of the double-whammy involved -- spending time focusing on God and scripture while getting a workout.

The instructor has a really soft, soothing voice. If there's one thing I can't stand it's having someone bark at you on a workout video, so that's also nice. I did find the pose names a little odd ("Flapping Tent", "Pulling up the Flaps", " The Altar") but let's face it . . . "Downward-facing Dog" and "Half Lord of the Fishes" are kind of weird, too.

Although I haven't done the workout yet, I do plan to use the video. If there's anything I find worth mentioning after using the workout tape, I'll come back and mention it at the blog. In the meantime, I like what I saw and particularly recommend it to Christians who like the idea of getting a varied yoga-type workout with the extra benefit of having some quiet time with God.