The Founding by Cynthia Harrod-Eagles 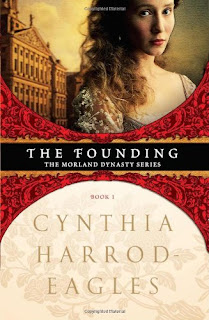 Eleanor Courtney is a ward of the influential Beaufort family when The Founding opens. She's beyond the normal marrying age and has assumed that she'll likely never marry, although if she had her choice she would marry the dashing Richard, Duke of York, with whom she's shared a single kiss.

When a marriage is arranged between Eleanor and the son of a wealthy Yorkshire sheep farmer, Eleanor is horrified but sets about making a decent home for herself and Robert Morland. They are dreadfully ill-matched and her father-in-law is a headstrong, sometimes bullying man; the wealth he has accumulated gives him a great deal of power over everyone, including his meek son. Eleanor grimly prepares to do her duty as a wife, to bear an heir and do as she's told. Yorkshire is foreign land to her and she longs for home.

Yet, with the help of her two faithful servants, Job and Gaby, she's able to build a beautiful garden retreat where music and quiet friendship help her to bear her new world. As she settles in, Eleanor shows herself to be a woman of unexpected strength, powerful influence and business savvy. Throughout bloody battles that force the Morlands to take sides and arguments over land with dangerous neighbors, through plague and prosperity, love and loss, Eleanor and her family become the cornerstone of a dynasty.

The Founding, set in the 15th century but written in an accessible modern style, was originally intended to be a single, stand-alone novel but was so well accepted that the author chose to make it the beginning of a series and has continued to write over 20 novels spanning hundreds of years. The Founding covers Eleanor's lifetime and reminds me of a comment that a romance writer once made about why Danielle Steel's novels sell, even though most people agree she's not a very good writer: "Stuff happens." That's certainly true of The Founding, although Harrod-Eagles is a writer of depth and style. The characterization and plotting are stunning.

Eleanor is an indomitable character, fiercely protective of her family and determined to continue expanding their wealth both through the sheep trade, which eventually expands by several levels, and through carefully-chosen marriage partners for her children. She doesn't always win. At times, the family must shift its allegiance and the children don't necessarily cooperate when it comes to the marriage game. There are tragic deaths and exciting moments with kings and queens, battles and romance. The Morlands are a fictional family but their story is seamlessly blended with events of the time so the reader gets a firm sense of time and place.

4.5/5 - Honestly, I probably shouldn't take off a half point because there is nothing I can criticize at all about this book. The characterization, historical setting, plot and action are amazing. I got so caught up with the family that I cried when two of my favorite characters died. The only reason I'm not giving it a 5/5 is that The Founding is not necessarily a book I would call an all-time favorite, wonderful as it is.

I'm thrilled to know that the series goes on practically forever. There are 28 more titles listed and I've been told the series continues up to 1917 -- hundreds of years of expansion from this family's crude beginnings as sheep farmers. I will definitely continue reading this series, although it'll probably take me at least a dozen years to get through them.

I'm not planning to review that long list of books I mentioned on Sunday in any specific order, but I found another DNF, so I'll do a DNF post with three books (balance!) and plan to have a children's day, soon, and post about a couple of books that relate to Earth Day on Thursday. Don't hold me to any of that. My life is crazy. There are men putting together an entertainment center in my den, as I write. Would you believe, we've never had an actual entertainment center, before? We've had TV stands and a crude wooden contraption that I'm pretty sure was made from a set of bunk beds (not attractive, but definitely functional). At this point, I'm looking at the thing and thinking, "Um. Will it fit?" Big pieces, small house.

Fiona is supervising. Go Fiona. I'd better check to make sure she's not getting in the way. Happy Tuesday!
Posted by Bookfool at 8:21 AM